Part of the problem with any art fair is that you get stuck, and that’s an issue if you’re working. By “working” I mean running around like a manic pixie dream hobo, with pens and unwanted business cards and rolled-up notebooks sticking out of the pockets of your old-man cardigan, trying to glean some sense of a narrative out of what is essentially a group of nice people trying to sell nice things to other people, mostly nice.

By “stuck” I mean having an enjoyable conversation about, say, the time the Butthole Surfers covered the Donovan song “Hurdy Gurdy Man,” while nearby dangles a cast-silicon sculpture molded from computer keyboards and human faces, and over all of it looms the sodden cloud of deadline. There are worse dilemmas in this world, surely. And far worse places to be than Skylight Clarkson North, the new home of the New Art Dealers Alliance’s New York art fair.

Journalists, myself included, have always knee-jerkingly referred to NADA using the adjective “scrappy.” But this year it actually does seem legitimately scrappy, in a good way, which is maybe because I spent the afternoon prior at a slightly fancier art fair, where the Europeans in line ahead of me were lamenting how hard it is to find a good building to buy in New York City these days, and noting, approvingly, that Oslo finally has some great restaurants.

NADA is noisier than most art fairs, for starters, and it’s not the usual crowd-and-small-talk noise, either. For instance it is around 6:30 p.m. and a man wearing a Hummer cap and large hoop earrings is singing, a capella, through syrup-heavy Autotune, in a lecture-and-performance pavilion sponsored by Kickstarter. His name is Richard Kennedy. “Don’t be afraid to talk to me!” he croons, over and over again, pitch shifting, and shifting. (I don’t talk to him, mainly because he’s singing and seems busy.)

Everyone is drinking cans of Modelo, which also seems sort of scrappy, until you realize they’re selling for $7.60 courtesy of Lee’s, whose menu is calling them “Gavin’s Modelos,” evidently because gallerist Gavin Brown had some event at Lee’s and left a bunch of Modelos there, which doesn’t answer the question of why they cost $7.60, rather than free. I buy one anyway, because I’ve been doing this long enough to know that it’s a really good look to try to ponder art and take notes with a contorted crab-hand while cradling a can of beer against your torso.

I run into Kristen Dodge, who is a wonderful and smart person with a very cool haircut who used to live in New York, but has since escaped to Hudson, where she raises pet goats and runs a gallery called SEPTEMBER. She’s showing a young painter named Odessa Straub. We get distracted trying to remember what the hell Odessa is, and spend a minute confirming via Wikipedia that it is the third-most populous city in Ukraine.

Straub’s paintings are accented with grungy bits of felt and other textiles. They have names like Persistent Poof From Sis Skin Care. A freestanding, abstract sculpture in the center of the booth, Dodge confirms, is composed of pieces of tire, one of those beaded massage-y car seat covers popular in the ’80s, and two distinct types of turtle shells (red-eared slider and map turtle, if you’re keeping score). The compositions are derived from dream imagery, Dodge says, and it’s mostly good dreams: bendy highways drifting into the ether, a four-legged almost-dog with fur for a face.

But, it’s not just turtle shells and rabbit pelts at NADA. There’s lots of other weird material. 247365 gallery has a few superthick, bizarro-kindergarten-arts-and-crafts painting-sculptures by Brian Belott, which have lengths of hamster Habitrail tunnels embedded in them. 321 Gallery has a piece by Paul McMahon that’s just a found drawing of a mallard with a pair of jeans draped around it. (The mallard drawing retains its original $14.99 price tag. It might also not technically be a mallard, I’m no biologist.)

The lesson here is that, if you’re not making art, the only excuse is that you’re a lazy asshole, and don’t blame the so-called price of supplies, because supplies are all around you, and maybe even at the pet store. At Safe Gallery, Greek artist Alex Eagleton has covered the walls of the booth in cheap carpeting, into which he has perma-carved graffiti he saw in Athens using an industrial air gun.

If you think the art world is overly academic and self-serious, you’re wrong. Just look at Shane Campbell Gallery, which is showing a series of paintings by David Leggett. One of them features Chief Wiggum’s head floating on a monochrome, Simpsons-yellow ground. Another has a smiling hot dog levitating above the words “no homo.” At Hometown’s booth, Antone Konst gives us a loose-limbed man who plays a saxophone emitting a little sun. Upbeat, freewheeling figuration is amply represented overall. Parisian Laundry has paintings by Luc Paradis that depict what appear to be lithe strippers formed from mud-colored ectoplasm. Patron, of Chicago, has sweet paintings of cats by Ryosuke Kumakura that were like a magic balm to this fair-battered soul.

Everyone seems to have forgotten about the kind of overpriced shitty abstraction that everyone used to buy. At Roberta Pelan, a Toronto gallery, I spy a man wearing a foam-rubber cowboy hat meant to resemble cheddar cheese. This isn’t merely sartorial flair; his name is Manden Murphy, and he runs the gallery, which is a little confusing, but in keeping with dealers’ tendency to name their spaces after people that might not exist. The cheese nods to a work by Syndey Shen in which the artist has borrowed the visual format of the MTA’s totally cheesy Poetry in Motion subway campaign, using the aesthetic to highlight a poem about cheese attributed to Virgil, supposedly. He tries to explain a bit about how the artist is motivated by the inherent contradictions of the steampunk aesthetic, but I’m too distracted by the headgear.

Everything is distracting, in fact. I keep running into people who say they recognize me from my Instagram, which doesn’t even feel like a Black Mirror episode anymore. Over at Yours Mine & Ours, an animatronic, emaciated martian (by Jeremy Couillard) sits at a desk, slapping his thin fingers on a laptop keyboard. “Those two paintings behind the alien are mine,” the artist Siebren Versteeg says to a friend. “I made them with computers!” The alien’s computer has a bumper sticker on it that reads GLOWINGLY EXTRACTED. His fingers aren’t really hitting specific keys, but a pre-programmed script has him “typing” lines like “I had a dream last night that I was France.” What gives? Gallerist RJ Supa explains: the NADA extraterrestrial is in communication with a second alien, who is hanging out at their downtown New York brick-and-mortar location. These two anorexic spacemen just relax all day, e-chatting each other stoner koans. At the main space on Eldridge Street, Couillard is showing a first-person shooter video game that he programmed. There’s a couch, and a bong, and all of that is sounding really good. “It’s BYOWeed,” Supa clarifies. Take that, Jeff Sessions!

Over by the Kickstarter stage, a bevy of suitably fierce drag queens are queueing up for a song-and-dance revue. I can’t justify a redux of Gavin Brown’s overpriced sloppy-seconds Modelo. “Less catching up, and a little more looking,” advised an only-half-serious Ellie Rines, who runs 56 Henry, a bit earlier in the evening. Amen! But my eyes and social graces are both exhausted. Who will buy the sexually confused hot dog, the verbose Martian, the lactose poesy? Let’s not worry about that. If the art world sometimes seems like a cabal of the undeserving rich lustily slurping the blood of the creative class, from NADA’s vantage point in 2017 it looks more like an energetic mob of friends trying their plucky best to amuse and astound each other. In these dark American days, that’s achievement enough. 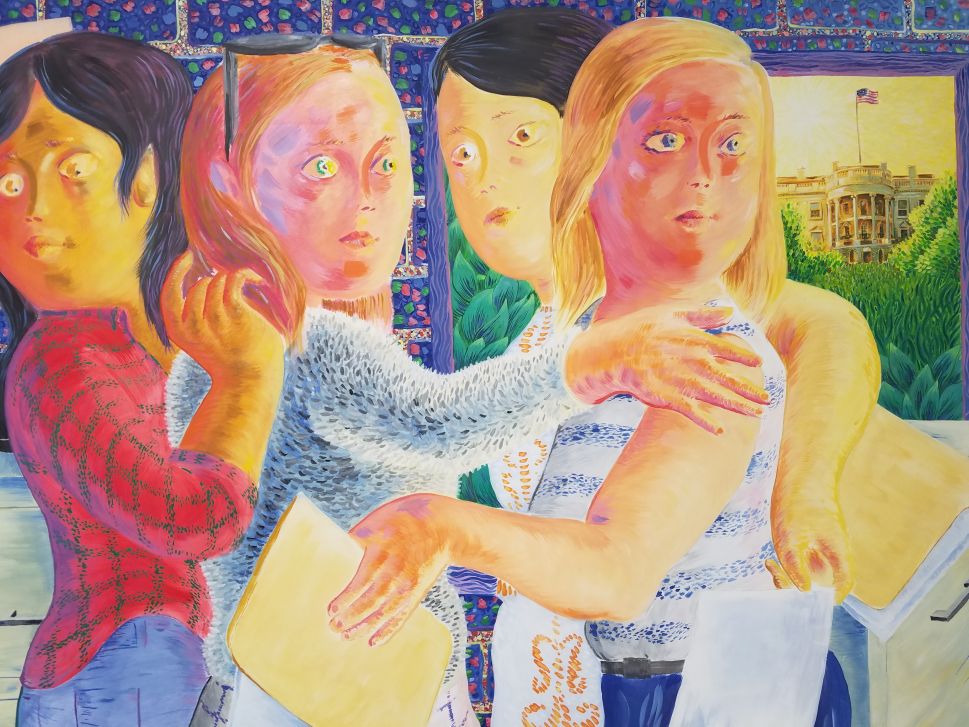