Listen, I get it. There is so much TV to watch these days and so little time to do so, much less decide what’s worth your tube attention in the first place. Do you want a lighthearted romp like The Good Place? A deeper drama-thriller like The Americans? A superhero mind-bender like Legion? A more nuanced, timely comedy like Black-ish? Well, friends, I’m here with an answer and that answer is a hard no. You don’t want any of that. What you want–what you’ve needed until this very moment–is a story in which a celebrated science fiction author chases history’s most notorious serial killer in a time machine. If you’re lost, and you’ve looked but still need TV: 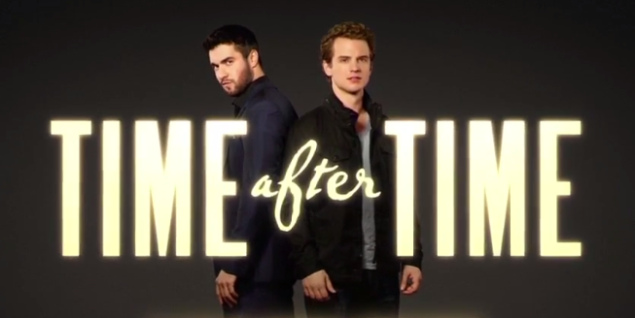 Recently, I sang the praises of The Flash‘s “Gorilla City” storyline as an example of pure, undiluted dumb-fun. ABC’s Time After Time, from The Following creator Marcos Siega, is both more fun and more dumb, and I love it with a passion usually reserved for 8-foot-tall CGI gorillas. Time After Time is beautiful in its ineptitude, spellbinding in its clunkiness, exhilarating in the same way falling out of your office chair is exhilarating. Watching the pilot of Time After Time is like watching a puppy learn to walk, only that puppy is wearing an adorable old-timey suit and chasing another puppy that just murdered a bunch of prostitutes. It makes no sense. It is incredible, in every way.

The protagonist of this remarkable work of art is the Nobel Prize winning author H.G. Wells., played by unReal‘s Freddie Stroma. Stroma’s take on the character asks you to imagine if H.G. Wells wrote The Time Machine, The Island of Doctor Moreau and War of the Worlds, but also totally fucked. 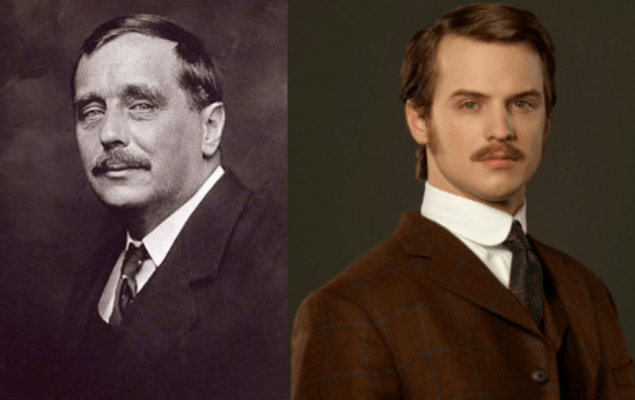 We meet Wells on the cusp of notoriety, in the process of writing The Time Machine. He is in “the research phase,” the author tells an assembly of rich hobble-knobs smoking pipes. What this means is that H.G. Wells built a fully operational time machine in his basement. The great thing, the amazing thing, is that he doesn’t even plan to use it. Homeboy Wells delved into the fabric of space and time so that he could write more descriptive paragraphs. That’s like if John Green cured cancer before writing The Fault in Our Stars but only told Shailene Woodley.

Luckily, Wells’ best friend, noted surgeon John Stevenson, is far more adventurous and pushes the author to expand past his comfort zone/current century. Super unluckily, though, John Stevenson is also the famously-uncaught serial killer Jack the Ripper. Revenge‘s Josh Bowman plays the character as if Jack the Ripper slaughtered five prostitutes in the Whitechapel district of London in 1888, but also totally fucked. 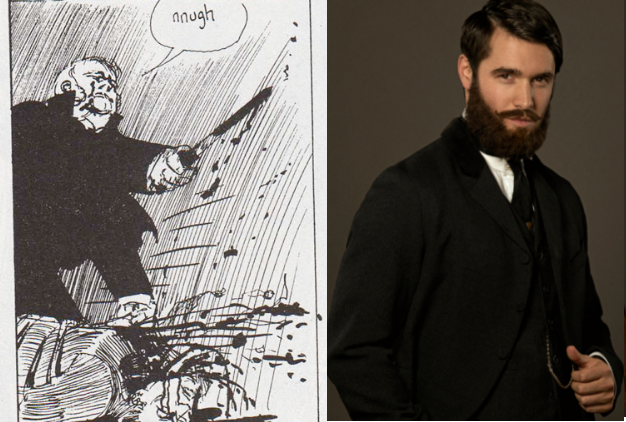 Time After Time begins at a dinner party hosted by Wells and attended by Dr. Stevenson, who stopped on the way for a quick murder. Because this show doesn’t really do Deep Thoughts, Jack the Ripper’s compulsion to kill is treated like a nicotine habit. Gotta pop outside real quick, haven’t stabbed a prostitute in ages. Either way, the dinner party is broken up by Scotland Yard’s finest, who find a murder weapon in Stevenson’s bag. In the best sentence I will ever write, Jack the Ripper escapes by hopping into H.G. Wells’ time machine and traveling to modern day New York City.

[Question Break #1: Is it not hilarious that Jack the Ripper didn’t, like, look for a window or something to escape first? Up to this point, there is zero proof that “time machine” isn’t just a fancily painted furnace. In fact, at least through two episodes, Time After Time doesn’t seem too concerned with how the time machine works at all. It just does. Which works out like gangbusters for Jack the Ripper, because the alternative would be going down in history as the serial killer that got caught in H.G. Wells’ elaborate basement porta-potty]

After a few moments of the soul-searching one does after finding out one’s best friend stabs ladies in alleyways as a hobby, Wells follows the Ripper into the future (the Time Machine returns to its original spot unless you have The Key. Wells has The Key. There is no non-plot-related reason The Key would exist, but Wells has The Key).

The Time Machine lands, where else, in the middle of an H.G. Wells exhibit at the Museum of Natural History. The World’s Most Overreactive Security Guard slams Wells to the ground for touching the exhibit and the author is brought to museum curator Jane Walker. And, straight up, in Time After Time‘s first episode Jane Walker is a terrible character, and I genuinely feel for charming-as-hell Genesis Rodriguez. She is the Female Role from Every Marvel Movie Ever, who blushes and ignores the insane man that falls from the sky wearing a ridiculous costume because dude has a six pack.

[Question Break #2: In what world did H.G. Wells have a six pack? Did anyone have a six-pack purely for aesthetic purposes before, say, 1936? When were crunches invented? I will give $100 to anyone who sends me a picture of anyone in the 19th century with a six-pack that wasn’t in the military. Or Abraham Lincoln. Everyone knows Lincoln was swole AF.]

Jane releases Wells on the (fair) assumption he’s an actor from the East Village, much like she did with Jack the Ripper a couple hours prior. “I liked this one,” she says. “He’s cute.”

Well, hold on to your curator socks, Jane. The first order of business for both Jack the Ripper and H.G. Wells–after initially being overwhelmed by taxi cabs, Starbucks, black people, etc–is to shave and become Modern Day Hot.

Here’s the thing from this point on: Time After Time, bless its heart, tries so hard to punch above its time-travelling weight and delve into *The Issues*. Jack the Ripper sits in front of a wall of TVs blaring the 24-hour news cycle–the highlight is a voice screaming “ISIS is the WORST”–and decides 2017 is his kind of scene, man. “I belong here completely,” newly sexy Jack the Ripper tells Wells. “Today I’m an amateur. These people encourage it.”

On one hand…well, yeah. But on the other, Time After Time tackles social commentary the way that security guard tackled H.G. Wells. It is this ridiculous, time-travelling romp BLAM “guns are bad and it’s easy to buy them now!” fun time-travelling romp BLAM “but ARE race relations better now than in 1883?” It’s honestly admirable, and does add some sort of layers to a show that basically asks “what if H.G. Wells, but would bang?” But man, something needs to be done about Jane Walker.

Speaking of! Jane Walker invites H.G. Wells to stay at her apartment after he goes through what every first time New Yorker must go through (he gets hit by a taxi). They bond, immediately, because Jane is into old-fashioned romance and H.G. Wells is technically 126 years old. “I don’t trust anyone, ever,” Jane says, as she shaves the strange, seemingly homeless man she met yesterday. Eventually, Wells must break the news he has traveled through time to catch Jack the Ripper. To prove it, he brings Jane three days into the future.

[Question Break #3: THREE DAYS? SHOW HER A DINOSAUR, H.G. WELLS. YOU HAVE A TIME MACHINE]

After traversing across the vast landscape of 72 hours, our duo learns the Ripper has been busy. He’s already committed three modern day murders, and the third victim is…Jane Walker. 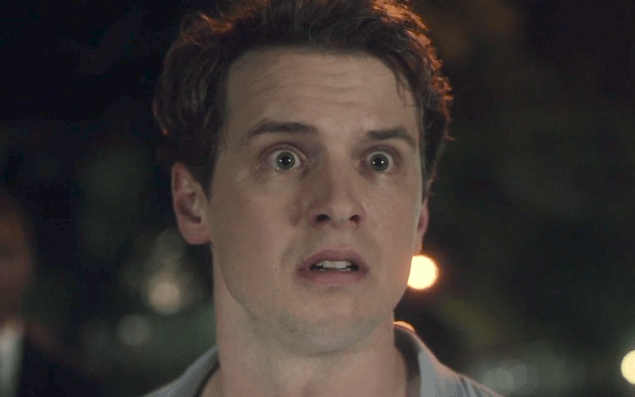 Instead of, like, traveling back 150 years and punting baby Jack the Ripper into a ravine, Wells and Jane go back a single day, save the second victim in TV history’s lamest standoff (“You don’t belong in this time, OR ANY TIME”), which…somehow?…means Jane is off the hook. I don’t know. This show, which is 100 percent about time travel, cares about the logic of time travel as much as it cares about that first murder victim that Wells totally could have saved, too. Oh, well.

The pilot ends with the Ripper abducting Jane and offering Wells a choice: give him The Key, and he’ll return Jane unharmed. Doubt it, tbh, but Wells still runs willy-nilly into the street, where he’s confronted by a mysterious woman. “Do I know you?” Wells asks.

“No, but you will,” she says. “I’m Vanessa. I’m your great great granddaughter.”

Time After Time, you beautiful, wonderful disaster. Please, meet me back here in ONE HOUR (or, now, if you have a time machine) for Part 2 of Time After Time‘s premiere which, IF YOU CAN BELIEVE IT, only gets better. I will be waiting. 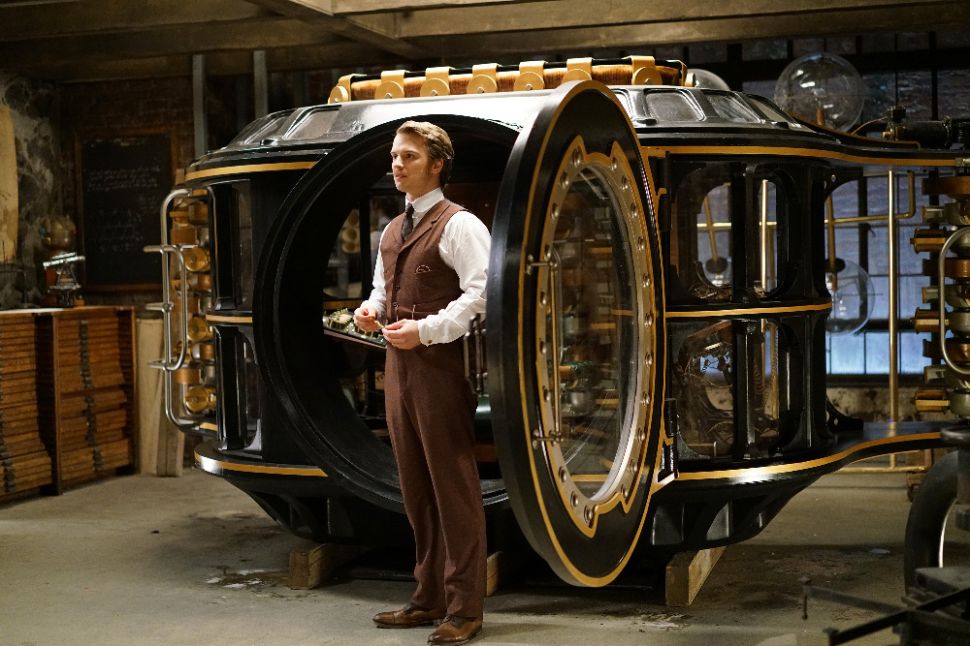