Welcome back, AfterTimers (I’m working on that). If the first half of Time After Time‘s two-hour premiere worked to set up the totally plausible, tbh probably even true story of H.G. Wells chasing his former best friend Jack the Ripper into the future, then “I Will Catch You” tried its darndest to explain everything. Or, at the very least, justify some truly gaping wrinkles in time. And oh boy, let me tell you, it does a pretty terrible job. Time After Time trying to explain the time machine is like me trying to explain The Time Machine. Ya can’t give the Sparknotes version, Time After Time. Either way, if your brain cogs were working overtime to apply some logic to this wonderful clusterbutt of a show before, bust out the oil because they’re about to taking a dang beating.

“How can I possibly be related to you if I’ve never met you before in my life?” H.G. Wells says to Vanessa (Nicole Ari Parker), as if this motherf*cker didn’t just invent time travel like two weeks ago. As if H.G. Wells isn’t standing in the urban metropolis of his wildest dreams hundreds of years into his own future. H.G. Wells, who just found out his best friend is Jack the damn Ripper can’t possibly comprehend this latest development. “Oh goodness, oh my stars and garters,” says actual inventor of time travel H.G. Wells.

But Vanessa is fine, right? Remember how she strode, confidently, from her SUV flanked by guards to tell Wells she’s his great, great granddaughter? Her poise, her obvious, panther-like strength, it was clear this new, intriguing character was going to clear things up for good. But, actually, the opposite of that. Turns out Vanessa doesn’t know what’s happening either. “I was hoping you might have some answers,” she says to Wells, who has less answers than an unplugged telephone. “I traced my genealogy. I can’t find a genetic connection.”

O…kay? She definitely has an explanation, though, right? Something to explain why she is so sure she’s a descendant of a time-traveling H.G. Wells? Let her tell the story:

My freshman year of college I was walking on campus. You ran up to me, out of breath, in a hurry, and said that you were H.G. Wells. I thought you were crazy. But then you said you were my great, great grandfather. It was insane. You were rambling. You told me about the time machine. Jack the Ripper. You spoke of the key and a woman in danger…then you handed me a letter.

[Question Break #1: At what point did Vanessa STOP thinking this dude was insane? Her story literally ends with “then the crazy mustachioed homeless man handed me a letter and ran away.” When, in the time between then and now, in which she searched and found no family connection, did Vanessa decide “dammit I think that crack addict from my freshman year of college was telling the truth!”]

Meanwhile, Jack the Ripper has Jane Walker holed up in the apartment of a woman named Jules (as in Verne. I can’t wait until he murders a woman named Phoebe K. Dick). Once again, Time After Time takes a genuine swing at some social commentary, and handled with more grace it could have given some much needed depth to Jane Walker. Unfortunately, this show’s Deep Dives never feel like character moments, they feel like Woke Mad Libs. Nothing feels genuine here. The writers are so ham-handed I am shocked, genuinely shocked, that Jane didn’t look directly at the camera to say “and that is a relevant issue in 2017″ and then, like, do the finger-kiss thing like the Swedish Chef in The Muppets. “I do not allow women to speak to me that way,” Jack the Ripper says.

“Then when you get in that time machine make sure to go backward. It won’t get better for you in the future as far as women are concerned,” Jane responds. Before “Fight Song” could start playing the Ripper, in a frighteningly relatable move, gets distracted by Wikipedia. Like most Johns on Earth, John Stevenson is pissed he’s only known as Jack, and isn’t even getting credit for his super sweet series of brutal 19th-century murders.

This, of course, comes after an Attempted Escape Scene so frustrating it’s like someone put every Scream movie in a blender. Jane straight brains Jack the Ripper unconscious with a candy dish–yes, Jane, yes–unties Jules in an act both selfless and heroic–yes, Jane, yes–and then proceeds to leave the apartment at roughly the same pace as our president taking on a slight incline. No, Jane, noooo. Jack, having been given about 2 and a half hours to recover, catches up to Jane and Jules to thwart their escape.

[Question Break #2: Wow but can Jack the Ripper teleport, though? I mean, yeah, Jane was crawling down that apartment building hallway but that was still a lot of ground to cover in that amount of time. I buy it. I buy that in the universe of Time After Time Jack the Ripper, in addition to being a blood-thirsty serial killer, has teleportation powers. He can fly, too. Why not?]

While Jack the Ripper furiously searches his own name on Reddit, Wells is working double-time. 1) He’s explaining why he can’t simply take the time machine and push a 12-year-old Jack the Ripper off a cliff, and B) Coming up with a plan to save Jane. Let’s start with the explanation. Apparently, when you use Wells’ time machine, you “prick the fabric of time,” so, naturally, “If you go too close to the same period repeatedly, it can cause a hole in time.”

Sure. Sure sure sure. Time is fine with Jack the Ripper hitting up the dance floor at a New York nightclub, just don’t do it more than once, naughty boy. Sure. This is fine. I accept this as the completely logical explanation, despite the overwhelming lack of…anything?…even if it means we will never, not even once, get to see Jack the Ripper riding a stegosaurus in Time After Time season, I don’t know, season 12.

As for that rescue plan…my goodness. If you look up the word “bungled” in the dictionary there’s a tiny sketch of H.G. Wells going “wait, waaaaaait” while three grown men fail to incapacitate one dude with a tiny knife. It doesn’t go (H.G.) well, is what I’m saying.

Wells, angry that Vanessa and her vast network of wealth interfered in whatever his actual plan was, storms off. “[Jane] was one the one person who showed me kindness. He will kill her just to get back at me. I know him,” Wells huffs like he wasn’t unaware this dude was a serial killer for several years. Yeah, you know him.

[Question Break #3: By the end of this episode, Jack the Ripper lets Verne go without stabbing her to death. Are we, going forward, looking at a story where JACK THE RIPPER does his best to become a better guy? And, way more importantly, would this…is this show going to do a love triangle where one point of that triangle is history’s most infamous serial killer? Do I…do I want that?]

Everything comes to a head back inside the H.G. Wells exhibit, where the time machine still sits dormant. And, once again, the scene is resolved after a Natural History Museum security guard turns into a damn Navy SEAL. This guy tasers Jack the Ripper and we don’t even know his name. He dies like a second later, because this show’s Jack the Ripper can not only teleport but has Wolverine-ass healing powers, but still. So, Jack escapes, but Wells still has The Key. Here is Jane, dear Jane, describing the harrowing experience of being trapped with an insane knife-wielding murderer who is using her as human bait:

“I’m not gonna lie, I was pretty scared.”

So, we leave off with two revelations. One: Vanessa checked again and wouldn’t you know it, she IS related to H.G. Wells after all. She wasn’t before, but now she is. In totally unrelated news: Wells and Jane totally gonna’ have a baby, y’all, who will also be related to Vanessa. The magic of procreation/time travel at work.

Also, a mysterious, ginger-haired man is following Jack the Ripper, taking covert iPhone photos, and constructing a Charlie Day conspiracy closet that connects all things Wells/Ripper/Time Machine. Because this show is already pulled directly from my dreams, I’ll go ahead and assume this character is actually James Franco from 11.22.63. 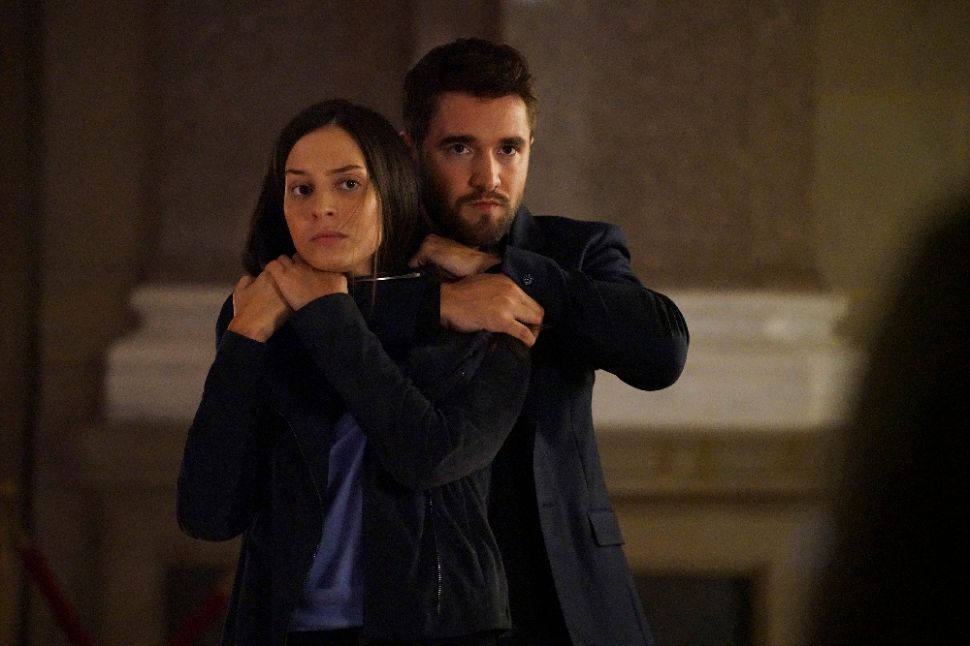