Last week, young conservative firebrand Tomi Lahren engaged in a spirited debate with the ladies of The View in which she outed herself as being pro-choice while implying that pro-life conservatives are hypocrites. “I can’t sit here and be a hypocrite,” Lahren explained, “and say I’m for limited government but I think the government should decide what women do with their bodies.” In the wake of this disclosure, the conservative community responded with outrage, and Lahren is currently embroiled in a very public war with her boss, Glenn Beck—whose network TheBlaze is home to her television show that is not airing this week.

During her interview on The View, when asked about her appeal and massive social media following, Lahren responded:

“I think in large part I represent Middle America. So you’ve got the two coasts, and those individuals seem to kind of just talk to each other. And then you’ve got all of Middle America right there that’s dying to have a voice. They don’t really feel like they have one—they’re not represented, you know, beyond their communities—so I think they watch me and they say, ‘Oh well you know she speaks like I do, she thinks like I do, she seems to maybe get it like I do’ and I think that’s why it’s resonated. And also, I think something very different. There’s not a whole lot of young, conservative women out there, and so I provide that for a lot of young women, they don’t have that.”

In the interest of dispensing with this uncomfortable truth, let’s be frank: Tomi Lahren has 4.2 million followers on Facebook because she’s young and she’s hot.

Sure, Lahren has some poise, and speaks with the same unfiltered nature possessed by that one friend you shouldn’t bring to a Muslim-majority town—and that’s unusual and refreshing. But she’s 24 and she’s conventionally, obviously hot, and that’s why she’s become such a media sensation. If we were talking about “Tommy,” a portly 24-year-old former College Republican with a YouTube channel who proudly wears his Capitol Hill intern badge on the Metro—and who has exactly the same non-physical traits—he would not have 4.2 million Facebook followers.

This isn’t to say Lahren’s goal was to get famous by being hot; I don’t know her, and I’m sure she’s a terrific, nice, ambitious young woman with substance. It’s clear she came into all of this with the genuine desire to pay her dues like every other young political nobody. Lahren interned at Congresswoman Kristi Noem’s office in her home state of South Dakota before joining One America News—an outlet to which she had originally applied, looking for work as an intern, but was gifted her own show after telling the CEO of OAN that she “would literally ‘do whatever’” at the network. Let’s be honest: if anybody other than a gorgeous then-21-year-old blonde had said that in a job interview, they’d have been shown the door and shamed in the office-wide email for months.

Her show On Point with Tomi Lahren—a clear nod to millennial vernacular—debuted the same month as her 22nd birthday. In the months and years that followed, Lahren had a number of video rants go viral, and in late 2015 she joined TheBlaze. She punctuated this work with a handful of high-profile hits on Fox News and The Daily Show with Trevor Noah, before making her big splash on The View.

Everything about Lahren exudes the trendy qualities of millennial culture that political media has become obsessed with in the decade following the great Obama sweep of young voters. The profile photo on Lahren’s Facebook and Twitter pages could not be more perfectly curated: power pose, tastefully dressed but still sexy; obviously gorgeous, yet serious. Both wallpapers feature sans serif quotes, reminiscent of the inspirational words of wisdom that flood our social newsfeeds.

But if there are any lessons to be learned from artificially accelerating a young person’s career because they are hot and fit a demographic that political media is desperately trying to court, it is this: with youth comes volatility.

The Daily Caller has reported that Lahren is suspended “for at least one week.” Glenn Beck fired back on this controversy, noting that TheBlaze has employed openly pro-choice hosts and saying that, “if you’re pro-choice, you can have a job at TheBlaze” before deconstructing her argument based on his read of Constitutional history. Beck has also taken to Twitter to call into question Lahren’s ideological consistency and intellectual honesty.

Wait, libertarian views? Help me out on Trumpcare, stimulus, and executive orders. Trump is anything but libertarian. #intellectualhonesty https://t.co/jlt5sFvQMP

Beck isn’t the only one questioning Lahren’s motives—she’s been called an opportunist. Tweets contradicting her pro-choice stance have been collated, and a three-month-old video of one of her “Final Thoughts” rants about “Lena Freaking Dunham out there wishing she could have murdered a fetus” has found a second life.

Ultimately, what we are watching is the natural, if not predictable, outcome of giving a very young person a very big platform for which they are not adequately prepared. We saw this just over a year ago when a well-known teenage conservative switched political affiliation; Bethany Mandel smartly wrote for The Federalist that “Conservatives aren’t good at hip. We latch onto C-list stars with half-baked political opinions and lavish them with our affections. They have tens or hundreds of thousands of Twitter followers, so we put them on our television and radio shows.” While the person she was referencing was a child, Mandel’s words strike at the heart of what went wrong with the rise and seeming fall of Tomi Lahren as a conservative wunderkind.

This isn’t to say that young people don’t deserve a chance or a break; there are so many cases in which this works out, perhaps most notably with Facebook, the very platform that helped propel Lahren to star status. However, it’s important—for ambitious young people and executives looking for the next big thing alike—to remember that political media’s Hollywood-like obsession with youth and beauty can prove complicating when it comes to maintaining the consistency of a brand or a message. We live in an age of “me and my brand,” not “we and our brand.”

In my adopted home-metro of Washington, DC—aka Hollywood for Ugly People—it’s a poorly-hidden secret that your value in politics and media are inextricably tied to what you do, who you know, how many TV hits you get, and your next book deal. Major scoops are built on fat, balding, upper mid-level political operatives in their forties wanting to sleep with young reporters while their wives and kids are away. Chock full of 30 under 30 lists, 40 under 40 lists, and The Hill’s 50 Most Beautiful, for industries that pride themselves on seriousness and intellectual superiority over “regular Americans,” the unavoidable fact is that politics and media are prone to the same shallow whims as the industries they look upon with disdain.

So perhaps it’s fair to say that the conservative political media deserved what they got with Tomi Lahren. They are all too happy to upbraid celebrities every time they express liberal opinions, as if it’s somehow surprising that celebrities protected by some of the most powerful unions in the world might be liberal. Meanwhile, when a 24-year-old woman who they didn’t bother to properly vet for her willingness to conform to their preferred level ideological consistency comes out as pro-choice, everybody gasps and clutches their pearls. Ultimately, had they recognized that while Lahren is articulate, blunt, and telegenic (a feat whose difficulty I am reminded of every time I accidentally open the front-facing camera on my iPhone), she is still young and lacking the kind of dedication and maturity to pick, stick to, and properly defend a message—a very big liability when you make somebody the face of your brand. 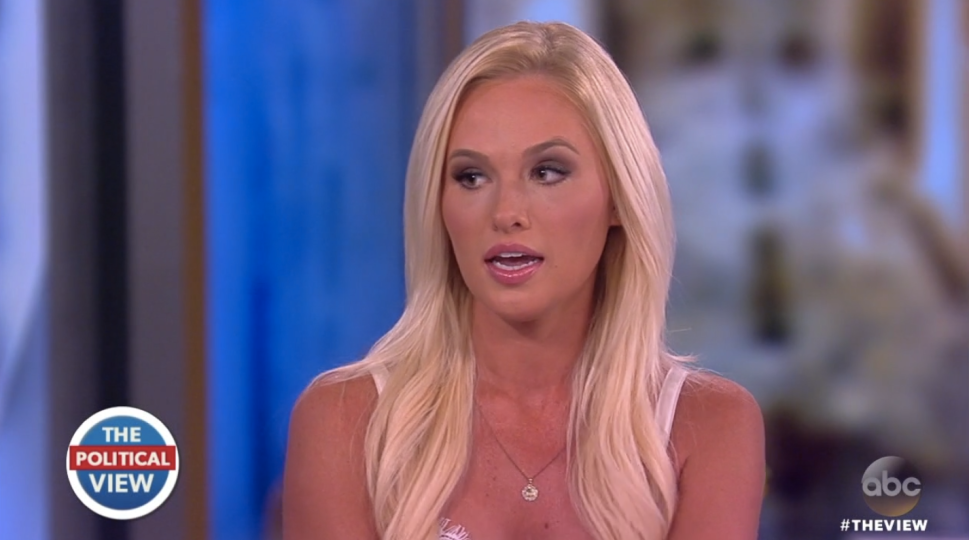