New York City pols rallied outside Immigration and Customs Enforcement’s New York City office ahead of a prominent Trinidadian-born immigrant activist’s annual check-in—a meeting in which he feared, but ultimately escaped, getting deported to his native land.

Dozens of advocates and elected officials joined Ravi Ragbir, an organizer for the New Sanctuary Coalition of NYC—a an interfaith organization that helps undocumented individuals fight detention and deportation—near the Jacob K. Javits Federal Building in Lower Manhattan before his yearly conference with authorities. Ragbir came to the U.S. on a visitor’s visa in 1991 and obtained a green card in 1994—but was convicted of wire fraud in 2001, served five years in prison and was ordered deported in 2006.

Ragbir received a stay-of-removal in 2011 and has since been subject to prosecutorial discretion, which permits an agency or officer to decide how to pursue individual cases on a year-to-year basis—and which spared him from expulsion again today.

“You would think that I would be happy coming back out and I am happy to be back here with my family, to sit with you, to sing with you, to talk to you—yes, I am,” an emotional Ragbir, whose wife and daughter are U.S. citizens, said afterward. “But I have to go through this again.”

Addressing reporters after the post-appointment press conference in Foley Square, Ragbir said that this check-in differed from last year’s, as ICE did not allow his wife or ministers to sit in on the appointment.

Ragbir’s lawyer, Alina Das, said her client would have to go back in one month and in order to attempt to secure a travel document.

“To see the tears streaming down her [Ragbir’s wife] face as we exited to know what it means—both that Ravi was able to come out but that he has to go right back in again in one month just demonstrates how horrific the system can be,” Das said. “And that we still hope that people will do the right thing, that people will be given discretion, that there will be due process and that people like Ravi will be allowed to remain with us.”

Ragbir said the election of President Donald Trump indicated the worst is to come for immigrants and said that if nothing was changing for him, then he “shouldn’t be checking in next month.” He voiced sympathy for less prominent immigrants who might face deportation under the new administration’s aggressive enforcement agenda.

“I have support, I have you guys, I met you guys, I have been with you guys,” he said. “But imagine those who do not.”

Ragbir’s wife, Anna Gottlieb thanked Das and other lawyers—and vowed she and her husband would “take back control” of their lives.

Activists in attendance voiced outrage that Ragbir and his family should fear his deportation.

“It is a travesty of justice and we as the New York Immigration Coalition are committed to doing everything that we can to stop the detaining and deportation of people like Ravi Ragbir and we will commit to do that,” Steve Choi, executive director of the New York Immigration Coalition, said. “To fighting back against all of the deportations that are tearing families apart, that are ripping our communities apart.”

Several politicians entered the center with Ragbir, while protesters marched around the building through the hour-long appointment, carrying signs bearing slogans such as “Refugees are welcome!,” “This Rabbi Rallies With Immigrants” and “Not one more deportation.”

Following Ravi’s appointment, Bronx State Senator Gustavo Rivera described the other people who sat in the center awaiting their yearly meeting. He argued the demonstrations made the difference for Ragbir, but others were less fortunate.

“Part of the reason why Ravi is standing with us today is because all of you are here, because they saw this and they know that this is not something,” Rivera said. “Sadly, sadly there are dozens of people up there right now and hundreds are walking through every day who don’t have that capacity to bring these folks out so we have to make sure that we remember all of them.” 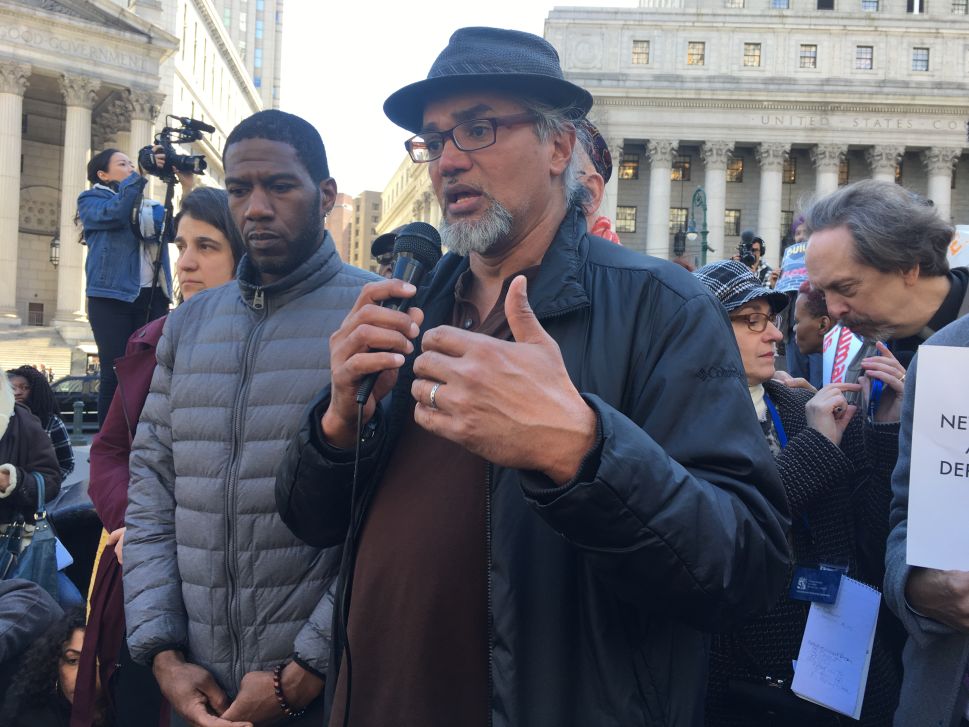