Rachel Maddow was mocked last night for her shocking scoop about Donald Trump’s 2005 tax return, which revealed that he made a ton of money ($150 million) and paid a ton in taxes ($38 million). In journalism, that’s called a “dog bites man” story. Here’s another of that ilk: New president replaces the U.S. Attorneys his administration has inherited.

Every President in modern history has replaced all – or nearly all—the U.S. Attorneys appointed by his predecessor. The same is true for Cabinet and Sub-Cabinet appointees: some 7,000 slots to be filled by Presidential loyalists and detailed in the Plum Book. (The Clinton-era Travel Office scandal was outside these Schedule C appointments.)

Sure, we’re as intrigued as anyone by why President Trump apparently reversed himself and asked for Preet Bharara’s resignation, along with 45 other U.S. Attorneys. The media is rife with speculation: was Preet about to launch an investigation into something touching Trump specifically? Was it political payback? Our favorite – for its Rube Goldberg attempt to connect the pieces – is Bharara’s reported investigation into News Corp’s allegedly inadequate disclosure to shareholders about legal settlements involving sexual harassment claims. (We dare you to parse that one.)

In fact, the obsession with Preet Bharara in the face of its silence over the other 45 US Attorneys reveals more about the media’s myopia than it does about the Trump White House. All those other states with right-angle borders in flyover countries don’t really count, but how dare you take our US Attorney from us?

Now for the truly shocking news, at least according to Obama appointee Matthew Axelrod who was interviewed in the National Law Journal about the Trump “purge.”  According to Axelrod, the former Principal Associate Deputy Attorney General – how is that for a title? – who worked for Sally Yates (who was herself fired for refusing to implement the President’s travel restriction Executive Order), the outrage was that Attorney General Jeff Sessions gave the 46 U.S. Attorneys only a day to clean out their desks.

Except that Mr. Axelrod forgot to mention one salient fact: there are 94 U.S. Attorneys. 48 other Obama appointed seemed to get the message about political tradition and had already voluntarily departed.

Our favorite non-denial denial explanation for Mr. Bharara’s firing comes from Senator Charles Schumer, who dismissed rumors that the President fired Mr. Bharara as political payback aimed at the New York Senator. Before being appointed to the U.S. Attorney position by President Obama, Mr. Bharara was a top aide to Senator Schumer.

The New York Times, which assigned five reporters to do three stories on the Bharara firing on Monday alone—not including an editorial and letters-to-the-editor—will probably milk this a bit longer. By then they will have discovered—or manufactured—the next Trumpian non-scandal.

Until then, The Times and other outraged media outlets might put their energies into something more useful. Like encouraging Mr. Bharara to move his family to the City and run for office. We actually like the sound of Mayor Bharara. 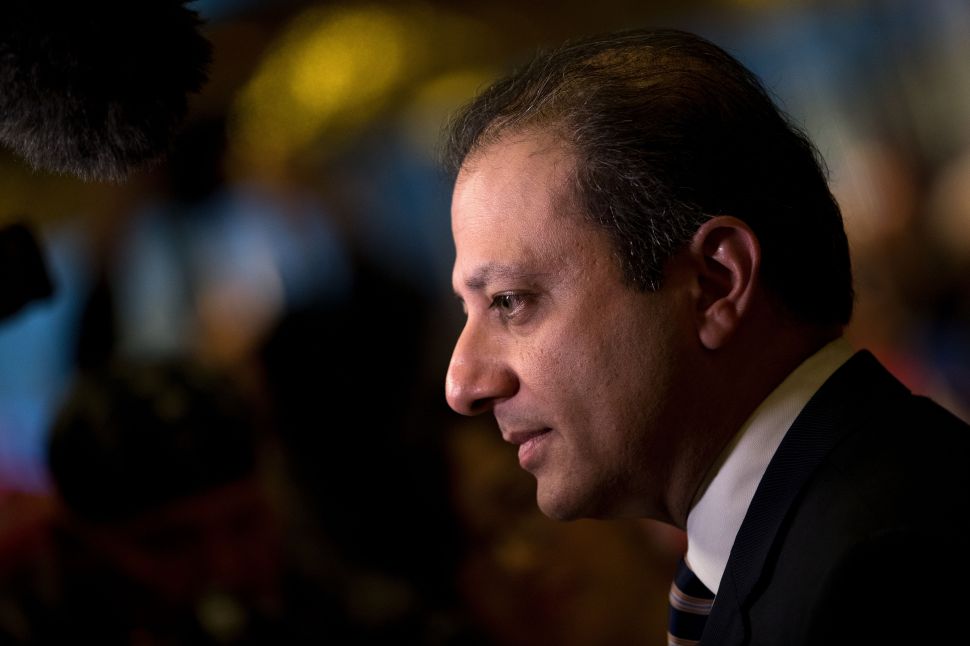