Yesterday, the Dow Jones Industrial Average dropped for the eighth day in a row. For the venerable index, this is its longest losing streak since 2011. The Dow is currently on pace for its worst month since January 2016.

So does this portend bad times? Has President Trump finally pushed the economy off the cliff?

Doubtful. Instead of witnessing a new bear market, what we’re really seeing is the implosion of the “Trump Trade.” This was the furious—and largely unexpected—rally that took hold of the U.S. market after President Trump’s surprise victory. It was the unexpected outcome of a still-less expected event.

Turn back the clocks to election night where, at one point, the Dow futures were down 862 points. That’s how much global markets freaked out over a Trump administration. But Doomsday Day, alas, was a no-show. Cooler heads prevailed and in the following day’s trading, stocks rallied. The Dow closed higher by 257 points. From there, the Dow went on to add more than 2,500 points in less than four months.

All of Wall Street was in love with the Trump Trade. It was unforeseen, highly doubted and nearly invincible—and now it’s dead. Prudent investors need to understand what happened and what to expect now.

Here’s the key: The Trump Trade wasn’t just that stocks were going up, it was the kind of stocks going up that grabbed Wall Street’s attention. The big winners of the Trump trade were small-cap stocks, cyclical stocks like industrials, and financial stocks. These moves were mirrored by a downturn in the long-end of the bond market.

The link that holds these pieces together is the belief in a resurgent economy. President Trump, it was held, would work with a GOP Congress to enact a major stimulus effort. By extension, this would lead to higher prices. “Reflation” became the buzzword on Wall Street, and everyone wanted in.

Questionable? Maybe, but once the Trump Trade took hold, it was hard to stop. In November, for example, the small-cap Russell 2000 jumped more than 16 percent in just over three weeks. Small business owners were clearly pleased: shortly after the election, small business optimism recorded its largest jump since 1980.

With the rally in financial stocks, one of the biggest beneficiaries of the Trump Trade was Goldman Sachs. Their stock catapulted after the election. At one point, Goldman alone made up one-fourth of the Dow’s entire post-election gain. This is noteworthy since Goldman CEO Lloyd Blankfein’s image appeared in a Trump ad about the dangers of the political establishment. Thanks to the Trump Trade, Blankein’s stake in Goldman increased by $140 million in a little more than one month. That’s not a bad gig if you can get it. Trump followed up by stocking his cabinet with plenty of Goldmanites.

Not only did the Trump Trade launch stocks higher, but it was a very tame market as well. Historically so. The S&P 500 ran off 109 days in a row without a daily decline of more than 1 percent. Not too long ago, a 1 percent drop was barely a scratch. In 2008, it happened 75 times. The S&P 500 has been within 5 percent of its all-time high for 185 days in a row. According to LPL Financial, that’s one of the longest streaks on record.

And it wasn’t just the U.S. market that rallied. Markets in countries that had no plans for tax cuts or deregulation rallied, too. But why is the market now pulling back? Well, if the Trump Rally was predicted on his ability to work with Congress, the recent healthcare episode shows us that’s not so smooth. Conveniently enough, healthcare was the top-performing sector on Monday. The president’s critics point out that his self-touted negotiating skills failed him—and that will doom his next effort, tax reform.

Everything that made up the Trump Trade is now running in reverse. Small-cap stocks are lagging the broader markets. The small-cap Russell 2000 Index is now flat for the year. Financial stocks have been going nowhere. The poor souls at Goldman Sachs have seen their shares lose 10 percent of their value in the last three weeks. (Allow me to reassure you not to feel to bad for them.) Plus, the long-term bonds have been working their way higher.

The stock market struck its last all-time high the day after President Trump’s address to Congress, which was (mostly) warmly received. At 6:00 a.m. the following morning, the president took to his favorite medium to tweet, “Since November 8th, Election Day, the Stock Market has posted $3.2 trillion in GAINS and consumer confidence is at a 15 year high. Jobs!”

The Trump Trade survived four North Korea missile launches, two Fed hikes, and the president himself. But the story here may be the Federal Reserve. Janet Yellen and her pals at the FOMC raised interest in December and again in two weeks ago. The Fed members had projected two more rate increases this year, but traders are starting to doubt that.

Going by the futures market, we can see that traders now think there’s a 48.5 percent chance that the Fed will raise rates again in June. That’s down from 54 percent on Friday. In fact, the futures prices narrowly infer that there will only be one more rate increase this entire year. Remember that resurgent economy? It may not be surging after all.

Here’s where we get to what unraveled the Trump Trade: Despite OPEC’s best efforts, there’s a glut of oil. As a result, the price of crude has been falling. It’s hard for the Fed to say rates need to go higher to ward off inflation while the price of oil can’t stay above $48 per barrel.

There’s even a stealth bear market that’s quietly hidden beneath the surface. Consider that one-third of the stocks in the S&P 500 are already down more than 10 percent off their 52-week high. On Monday, the Dow briefly slipped below its 50-day moving average, which is often a bearish indicator. The Trump Trade has given way to the Trump Fade.

For now, investors can expect growing volatility, lower oil and a further unraveling of the Trump Trade. Don’t worry, the market as a whole is still quite healthy. Investors who in November thought they found nirvana, found instead, a fleeting mirage. 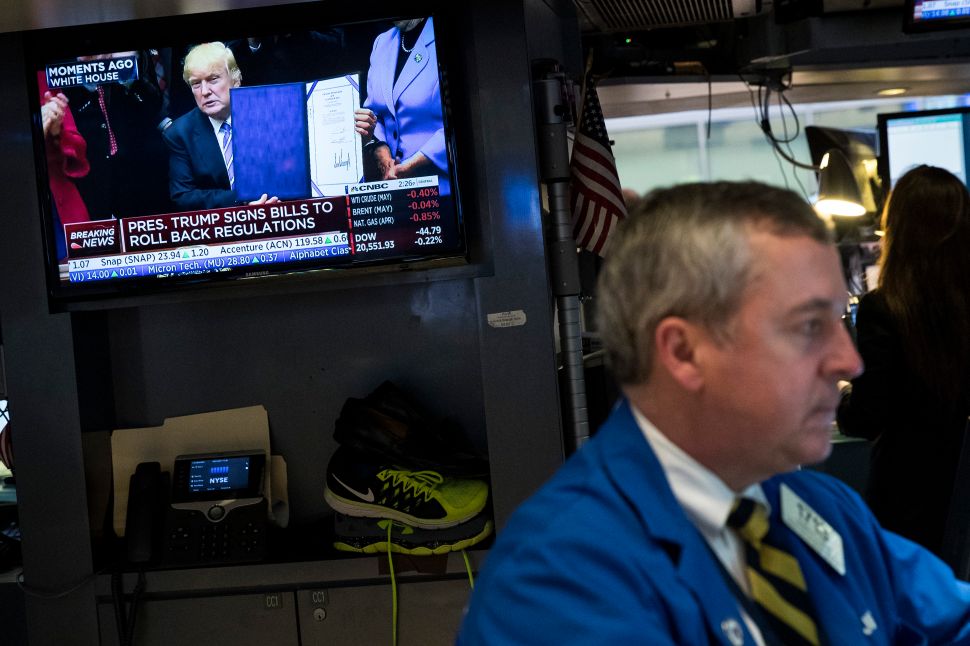