After a chaotic, Four Loko-soaked trip to New Orleans, the Vanderpump Rules gang comes crawling back to Los Angeles. To our detriment, things are much better for them there, but we had to hit upon a “just OK” episode eventually.

30-something server and lame tattoo-haver Katie has taken on the role of Lisa Vanderpump’s personal assistant this season. She’s also getting married, which has led to an unfortunate amount of screen time. Her charming, cowardly fiancé Tom “Schwartz” Schwartz does not work, allegedly due to his crippling anxiety but actually just because he’s lazy and the couple can’t disclose how much they make from being on a TV show. Despite being unable to work for Lisa – she’s the only person on the show that calls him on his bullshit – Schwartz is frequently exposed to (and partially in love with) her. This, and Katie’s perceived closeness to Lisa, has encouraged the delusional couple to request that she marry them. Yes: Our bride- and groom-to-be are still reeling from the joint bachelor and bachelorette party that saw their wicked verbal abuse captured on camera. So in what universe is the next logical move ask Lisa Vanderpump to officiate their impending nuptials? Like, a week and a half before the ceremony, too. Good one.

For all her business savvy, Lisa has a soft spot for her employees and their associates. Too soft. It’s like she thinks they’re all her delicate baby-children. Jax Taylor, for instance, is goddamn unemployable by any standards, except for maybe in the role of escort. That’s not even a firm maybe. But I digress. Instead of pulling Lisa aside to ask her to shoulder this enormous burden of personal responsibility, Katie and Schwartz hire a fake English butler to herald their arrival and pose the question for them. It’s just the type of mature, grounded approach that speaks to the elegant Vanderpump. Of course, we can’t be sure that this wasn’t all a performance; the sitcom-worthy hijinks may have been just for the camera. But it’s hard to be optimistic when Schwartz and Katie are involved. Plus, Lisa’s unnerved reaction seems pretty genuine.

Does that conversation go the way we expect it to? No, actually – it turns out even worse. After all, Lisa’s been around, in some form, over the course of their relationship. Katie and Schwartz are past their expiration date, and she knows it; Lisa may be lenient, but she’s not dense. It wouldn’t be appropriate to rubber-stamp a marriage she’s not comfortable with. So she gently, politely, says no. Also, Katie cries. Lisa tears up too – or so it would seem, as she’s fairly Botoxed-out by now. She offers a message of hope, though: Spend time together! Be present in each other’s lives! Connect again – fall back in love. Katie, “disappointed” in the relationship, thinks they can do it. Watching the women cry wigs out Schwartz. Previews have shown us that Lisa does ordain the woodsy wedding, so something is going to change.

Next up, we follow the gang to a beach afternoon, where Schwartz and Katie express some actual warmth to their friends and each other. Lisa’s unexpected No has gotten under their skin. Hey, maybe there’s life in them yet! Meanwhile, pal Stassi dishes on her dating life; after dating a parade of unworthy idiots for a decade, she’s ready to try the casual thing. We don’t get to see the first guy, who must have responded positively to her dating profile (interests include wine, brunch, ghosts, murder, her dogs, aliens, and ranch). Instead, we witness her blind date. The dude is sweet and bland, and Old Stassi would have torn him apart. Shame.

Stassi provides, temporarily, an actual peek into modern dating. She pre-approves of her blind date’s travel photos and applauds the lack of gym selfies. At dinner, she’s tense and doesn’t ask him enough questions. She’s turned on her Location Setting for her phone in case the dude is a murderer, which she then makes the mistake of explaining, and expertly maneuvers away when it looks like he may kiss her at the end of the night. Her friends are a few years older than she is and have been coupled up for some time, so Stassi the only cast member we can watch Actually Date. Except, she’s on a Bravo reality show in Los Angeles, and therefore barely tethered to reality at all (for instance, one of Stassi’s podcasts is a 3-hour odyssey through getting drunk and reenacting Titanic). She’s oddly likable this season, though — best of luck, bb.

And just like that, it’s time for the annual SUR photo shoot! Doesn’t every restaurant gig involve doing a partially clothed photoshoot with your coworkers? Wait. Posing near a ten-foot-long, plastic roasted pig while butt ass naked isn’t a regular hazard of bartending? I don’t believe you. Plus, Lisa has dubbed this year’s theme “Indulgence.” You may already be thinking, “Isn’t that a club from the Stefon universe?” and before your brain even completes the sentence, Lady Vanderpump will promise you the aesthetic is 100% “Salivatingly salacious.” Incredible.

The infamous calendar shoot has been home to some of Vanderpump Rules’ most spectacular fight scenes, but it looks like this year may be an exception. We’re at SUR for this one, though, and not Lisa’s sprawling manse. Putting everyone on home turf has reduced the likelihood of conflict. Damn. In between shoots, Jax says some douchey stuff to Brittany, and Sandoval offers needlessly descriptive and erection-centric modeling tips to the audience. Katie and Scheana have another brief, tear-filled conversation. Disappointingly, it’s all par for the course. Sometime after the shoot, Lisa treats Katie and Schwartz to lunch at PUMP. It is there that she reveals – dun dun dun – that she’s agreed to ordain the Maloney-Schwartz wedding after all! Life truly is a Shakespearean comedy.

Still to come this season: The return of Lala Kent! Katie and Schwartz’s wedding (it happens)! James is back, for some reason! (Is there a word for the opposite of compelling?) In all seriousness, though, this show needs an explosive element to keep it at all interesting. This week may have been filler, and that makes sense; after the New Orleans triad, it needs time to bounce back. Plus, the cast has to be tired of fighting – but the resulting introspective realness was kind of a downer. After all, when a reality show looks too real, it just becomes life. Life’s enough of a bummer. We don’t watch Vanderpump Rules for the normalcy. 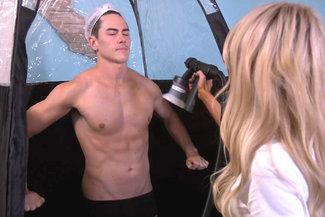