It’s considered one of the world’s oldest Christian populations—now it’s poised to become the most recent driven to extinction. So says Canon Andrew White, a prominent churchman known as the “vicar of Baghdad,” about Iraqi Christians.

Reverend White led St. George’s Church in Baghdad, the only Anglican church in Iraq, until the Archbishop of Canterbury ordered him to leave in November 2014 as the Islamic State threat grew. He thus became part of an exodus during which the country’s Christian population has dwindled from approximately 1.4 million three decades ago, to about one million after Saddam Hussein’s ouster, to a mere 250,000 today.

Noting where this trajectory leads, White told Fox News this week, “The time has come where it is over, no Christians will be left. Some stay Christians should stay to maintain the historical presence, but it has become very difficult. The future for the community is very limited.”

The reverend continued, “The Christians coming out of Iraq and ISIS areas in the Middle East all say the same thing, there is no way they are ever going back. They have had enough.”

Why is no mystery. As Catholic Online reported in 2014, “The Islamic State has warned Christians, possibly for the last time, saying ‘there is nothing to give them but the sword.’ Across Northern Iraq, Christians are huddled in refugee camps, trapped in the desert, or trapped in their homes, waiting for death.”

Yet even this doesn’t capture the barbarity, as the Islamic State will stop at nothing to purge the lands it holds of those it considers “infidels.” There was a 2015 report of its jihadis beating a young boy and cutting off his fingers to compel him, his father and two others to renounce Christianity; all four were later crucified.

Then there are the women publicly raped and beheaded for refusing to leave the faith, children and adults burned alive, people drowned in cages, and a shocking 2016 report of Islamic State sadists roasting victims in a bakery oven and feeding 250 children into an industrial dough kneader.

No one is more aware of the Islamic State’s true nature than Rev. White. Following Jesus’ example of breaking bread with sinners, he once invited ISIS to dinner only to be told, “Yes, we’ll come, but we’ll chop off your head.” After relating the story last year, he quipped, “Rather kind of them to warn me.”

Though once kidnapped in Baghdad, now uprooted, and suffering from multiple sclerosis, the UK-born White has maintained not only his sense of humor but also his will to fight. He tends to his displaced flock in Jordan and aids those fleeing IS persecution via two organizations he founded, the Canon Andrew White Reconciliation Ministries in Amman, Jordan and “Jerusalem Merit” in Israel. He also has adopted six children and has given away all his money, according to the Telegraph.

Of course, white isn’t alone in sounding the alarm about the threat to Mideast Christianity. In 2015, Italian Bishops Conference head Cardinal Angelo Bagnasco noted that the “‘cull of Christians continues’ in the Middle East and Africa where it ‘seems somebody has decided to uproot them to cleanse the territory,’” reported ANSA news.

Patriarch of the Syriac Catholic Church of Antioch, Ignatius Joseph III Younan, was a bit more specific in laying the blame. He warned last year that the “totalitarianism based on Islamic creed is the worst among all systems of government” and that “the very survival of Christians in the cradle of Christianity is quite in danger.”

Yet this may just be the last chapter in what’s a very old story. Unbeknownst to many, Christianity was the dominant religion in the Mideast and North Africa (which at the time had more Christians than Europe) by the 400s A.D. After Islam’s birth in 622, however, Muslim armies quickly conquered the old Christian lands.

In fact, these Muslim forces moved into Europe in 711 and by 732 were within 125 miles of Paris, where they were finally halted at the Battle of Poitier. Later in history, they would threaten Europe from the East, which inspired the misunderstood, defensive wars known as the Crusades.

Despite the history and, more significantly, the current events, critics note that the West has largely ignored Mideast Christians’ plight. Ignatius Joseph III Younan accused Western leaders of being “naïve and complicit” in the Christians’ destruction. Melkite Greek Catholic Patriarch Gregorios III lamented, “I do not understand why the world does not raise its voice against such acts of brutality.” And Jean-Clément Jeanbart, the Melkite Greek Catholic Archbishop of Aleppo, stated that the European media “have not ceased to suppress the daily news of those who are suffering in Syria….”

Archbishop Jeanbart observed that the problem is “political correctness.” This involves the usual prejudices, well exemplified by Barack Obama’s policies. While at the United Nations last year he likened a refusal to accept Muslims migrants to the “turning away [of] Jews fleeing Nazi Germany” and said it would be a “stain” on our conscience, he himself has turned away persecuted Christians.

In fact, Christians are (were?) 10 percent of Syria’s population, yet only one half of one percent of Obama’s Syrian migrants were Christian—this translated into just 56 out of 10,801 refugees.

So it appears that, today, stained consciences just may be in style. 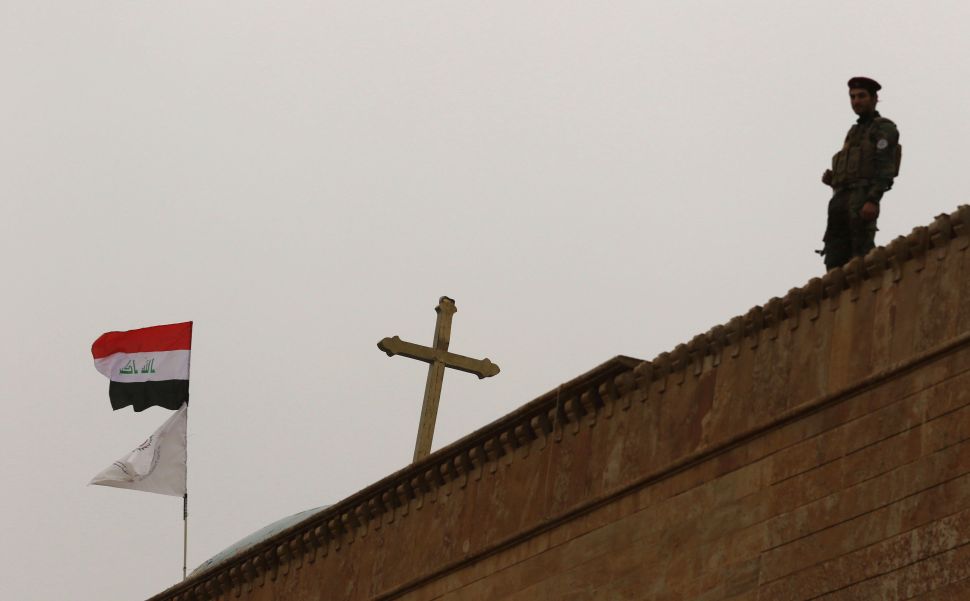