Let’s put the whitewashing controversy to bed: yes, busty beauty Scarlett Johansson plays Major, the melancholy protagonist of the beloved Japanese anime – and, despite a very thin black wig framing her milky face, she is not Asian like the heroine of the Japanese media franchise that began as a seinen manga. Johansson told The Independent that “I certainly would never presume to play another race of a person,” or in this case “yellowface.” But rather than see this as a pathetic act of cultural appropriation – which it is – the casting of Johansson reflects something more insidious: global corporate appropriation of an emotionally rich literary artifact that puts Johansson in the role because she is the biggest female action star that they could cast who could carry a film estimated to be budgeted at $110M. It’s a kind of big-money sensory blindness that sees the bottom line and, in an effort to create an international cash cow, misses the point entirely. Raising the question: why can’t they just move up the standalone Black Widow/Natasha Romanoff comic-book movie that would employ the actress’s dangerous curves in a surefire Marvel money-maker?

For those new to Ghost in the Shell, it’s the dystopic adventure of a Japanese AI corporation named Hank Precision Instruments that has hit some speed bumps on the way to perfecting Man 2.0, a being that marries a human brain to an entirely robotic body. Major is the latest model, a weaponized brain-bot with ballistic boobs whose mission is to seek and destroy threats to the company and the government, whose interests are entwined like Goldman Sachs and the White House.

As an effort in world-building, the 3-D film is dazzling, in a candy-colored Blade Runner way. Director Rupert Sanders, who imparts little personal voice to this corporate exercise, fills the screen with a futuristic urban mixing bowl of Macy’s balloon sized holograms and shuffling geisha robots in traditional garb. The viewer is constantly looking for fascinating details in the corners of the frame because the action is so deterministically generic.

Of course Johansson, in a revealing white body suit we already know from every movie she’s ever starred in is considered the ideal by male Hollywood execs, can do the assassination tango with aplomb. She muscularly dives into dangerous corporate meetings, rooting out executive-killing terrorists and lethal geisha-bots with no concern for her physical well-being. Why would she? Her doctor (Juliette Binoche, picking up a large paycheck with a tortured expression of empathy) will simply zip her back together, plug her in and she’ll be as good as new.

And, yet, shout out to a major studio movie that makes room for the great “Beat” Takeshi Kitano, a unique Japanese legend famous for playing tough guys and Yakuza who just doesn’t happen to be the story’s driving chick. The multi-hyphenate — writer, director, actor and comedian — lends an authentic sense of cool as Major’s boss Chief Daisuke Arakaki. He displays the kind of quiet authority, which, if you’ve seen Fireworks, Brother or Kikujiro, you know will explode into extreme and unabashed violence when he finally gets out from behind his desk.

Ultimately what’s missing, along with a sense of narrative drive, is the existential angst at the anime’s heart: the titular ghost in the shell is the soul, the humanity, resident in the surviving human brain planted in an electric Barbie Doll. The themes at the story’s core are parroted without resonance. The script self-consciously asks who are we as humans — our actions; a memory net; our connections and loyalties to our colleagues and intimates? Will AI expand the human condition, or become just another means for big brother to control the individual? What is the nature of the soul, the story should be asking, soulfully. And, yet, this arty actioner is only tangentially about the deeper questions that gave birth to the poached franchise in the first place. Johansson’s Major mouths the words and embarks on a vision quest to discover her identity – but the strongest image is her gymnastic boobs-baring backflip into the stunning Japanese futuristic backdrop. 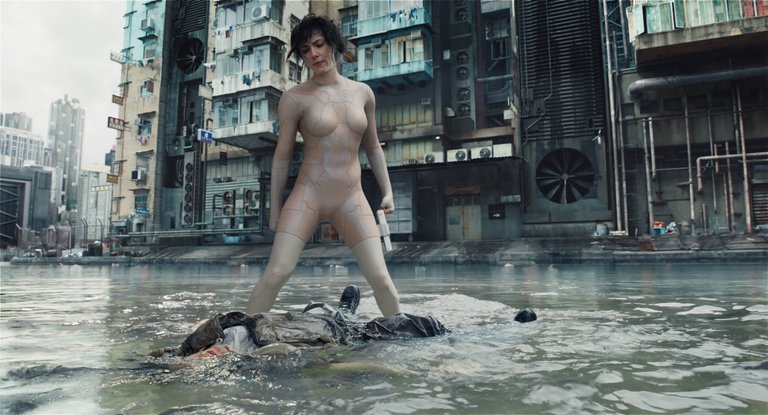