Today’s terror attack at the Palace of Westminster has sent shockwaves through the British political establishment because a knife-wielding terrorist was able to penetrate ‘tough’ security. When I say tough let me clarify what I mean: every gate is guarded by at least ONE UNARMED police officer.

The police constables are sometimes (but not always) assisted by yet more unarmed security guards from the Metropolitan Police P Division (Parliamentary Police). Behind the scenes, Metropolitan Police D Division (Diplomatic Protection) provide firearms support, although a cursory look at the weapons shows some of them aren’t even loaded.

Today the attacker simply had to overpower two unarmed police officers and he was in the heart of British government. Those officers could call for backup—but why weren’t the firearms officers at the gate in the first place?

New Palace Yard is not only home to Big Ben but also the offices of many MPs, including the Prime Minister herself. It is also home to the Press Gallery, which is why there have been so many photos and videos of the incident. This is not the sort of place to be left with such lacks security.

If you are shocked now, you’ll be even more appalled to learn that there is a major entrance to the Palace which has just one unarmed guard. Getting through this gate would be a catastrophe for Parliament, as entering here would give anyone unrestricted access to the offices of hundreds of MPs.

This gate was not the target today because it is not immediately obvious to passers by that it is an entrance to Parliament. Given the seriousness of today’s incident, I won’t explain its location, but I will say that the Palace of Westminster is spread over multiple interconnected buildings, many of which are unknown to the general public.

All this begs the obvious question: given we all knew Parliament was a target why does the practice of unarmed guards continue? The police officer who fended off the knife attacker today was stabbed multiple times before firearms officers got to the scene. Had this been almost any other country in the world this officer would have had a gun, and his tragic death would probably have been prevented.

And there is no point saying we didn’t realize this could happen, because New Palace Yard was the scene of one of the worst security blunders in British history.

Unbelievably in 1979, the INLA smuggled a bomb into the six-story underground car park hidden below it. Margaret Thatcher’s spokesman for Northern Ireland was killed in the resultant blast. That incident led to all cars being checked for bombs—but trust me when I tell you the security isn’t up to much there, either.

Today a series of brave officers tackled an evil murderer, and they ought to be applauded. But to have so few of them, and to leave them mostly unarmed is like tying their hands behind their backs. There is no reason to leave them so vulnerable, and the authorities have a duty to offer our nation’s capital better protection. 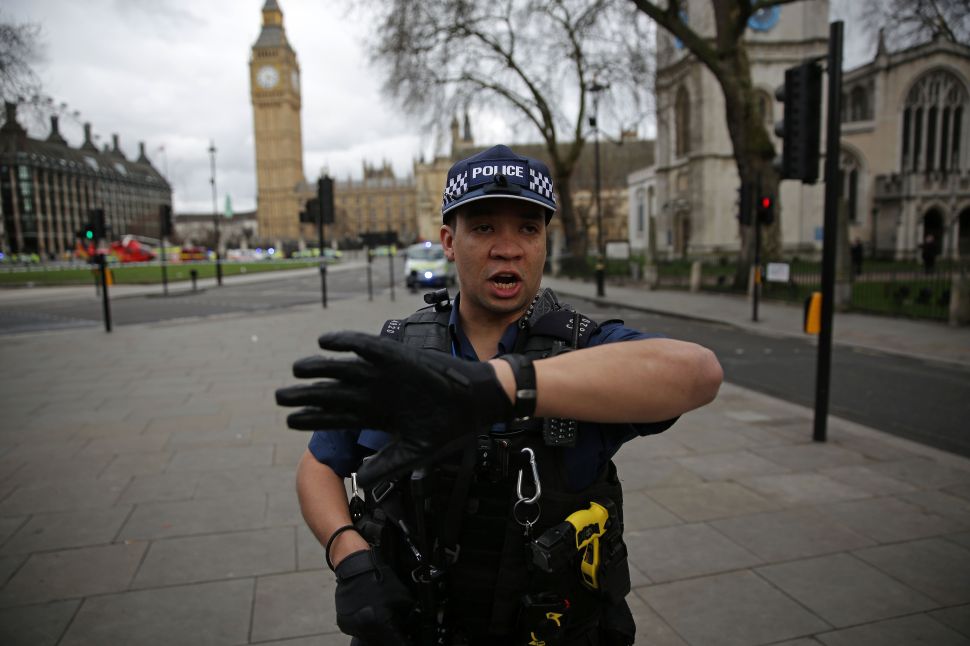