The Declaration of Independence, which incited the birth of the United States, noted that all men are created equal. But in the subsequent 241 years, it has been an ongoing struggle in the United States to attain class, race and gender equality. Since Congress’ declaration in 1987, March has been devoted to elevating women’s history and raising awareness about current women’s issues, as the struggle for women’s rights is often unknown and ignored.

The women’s rights movement in the United States originated at the first women’s rights convention in Seneca Falls, N.Y., in July, 1848. The advocacy efforts that led to the women’s suffrage movement all the way to contemporary issues of women’s equality can trace their roots to this first convention and the 19th century reformers who organized it.

“We are assembled to protest against a form of government existing without the consent of the governed—to declare our right to be free as man is free, to be represented in the government which we are taxed to support, to have such disgraceful laws as give man the power to chastise and imprison his wife, to take the wages which she earns, the property which she inherits, and, in case of separation, the children of her love; laws which make her the mere dependent on his bounty,” Elizabeth Cady Stanton said, addressing the Seneca Falls Convention. Stanton founded the convention with Lucretia Mott after they were barred from the convention floor at the 1840 World Anti-Slavery Convention in London. Both would go on to become two of the most influential historical figures in the fight for women’s rights. “It is to protest against such unjust laws as these that we are assembled today, and to have them, if possible, forever erased from our statute books, deeming them a shame and a disgrace to a Christian republic in the 19th century. We have met to uplift woman’s fallen divinity upon an even pedestal with man’s,” she said. “And, strange as it may seem to many, we now demand our right to vote according to the declaration of the government under which we live.”

Stanton, who became a household name at the time, and others who attended the convention devoted their lives to fighting for women’s rights and women’s right to vote. Though they didn’t live to see the results of their efforts—such as the ratification of the 19th amendment, which gave women the right to vote—they inspired and guided their successors in the women’s movement.

Today, the Women’s Rights National Historical Park in Seneca Falls teaches visitors about the founders of the women’s rights movement and inspires those who fight for women’s rights today. “The site reminds us all that the struggles for civil rights, human rights and equality are global struggles that continue today,” Noemi Ghazala, superintendent of the Women’s Rights National Historical Park, told the Observer in an interview. Ghazala, who was born in Puerto Rico and raised in New York City, was inspired to become a National Park Ranger after visiting Ellis Island in New York City. “My parents were ‘citizen-migrants.’ While they did not enter the United States through Ellis Island, I felt their ‘Island of Tears’ story at as I listened to the ranger program. As Puerto Ricans and American citizens, my parents’ journey to the United States mainland was one of personal courage, determination, and toughness of character as those that entered the country before them similarly demonstrated. The National Park Service’s protection of a site that told the story of the ‘peopling’ of the United States resonated with me.” Ghazala first visited the Women’s Rights National Historical Park during Convention Days, the park’s annual celebration commemorating the July 1848 convention, and was appointed the Park’s superintendent in 2013. Today, she presides over the park’s efforts to highlight relevant national and global issues. She added, “President Obama reaffirmed this fact in his 2013 inaugural address: ‘We, the people, declare today that the most evident of truths—that all of us are created equal—is the star that guides us still; just as it guided our forebears through Seneca Falls, Selma and Stonewall.’ ” 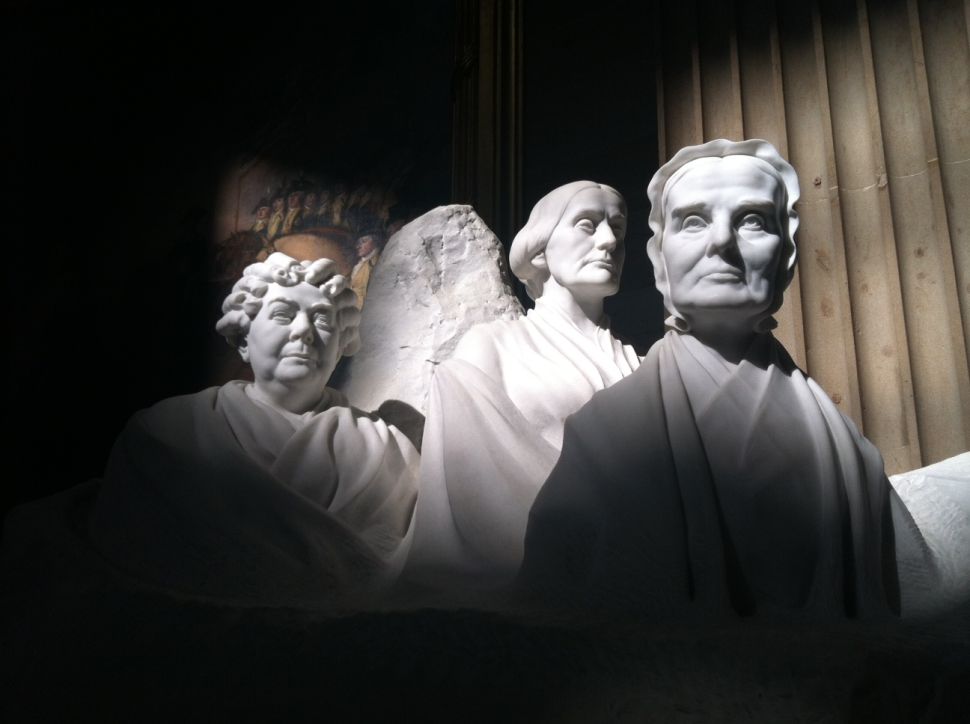