Yassir Lester is a writer and comedian, mostly known for his behind-the-scenes work on series like HBO’S Girls or The Carmichael Show on NBC. So how did he end up starring on a Fox sitcom about time-traveling college professors? To hear him tell it, accidentally.

“It just came through the pipeline,” he says of the opportunity. Comedian Adam Pally, a friend of Lester’s, was already attached to the pilot. One evening last year, Pally shot Lester a text about reading for it. “I was like, ‘The script is funny, thanks,’ but I was already working on Girls and The Carmichael Show simultaneously.” Additionally, notes Lester, “I’m not an actor. I came out to L.A. to do standup, and create a TV show, but never be on one,” he laughs, “Or be in it.”

So how did he get the part? It’s a tale as old as time: He phoned a friend around midnight, made “a super weird audition tape,” and submitted it to the executives “deliriously, at like 2:30am.” How weird is “super weird” to a comedy writer? Lester ordered curly fries, jalapeno poppers, and an Oreo milkshake to his house, and devoured all three on camera as bizarre graphics and “shooting stars” rained down around him. (Headline from the year 2018: Yassir Lester Named Executive Vice President of Development at Adult Swim.) The next morning, he says, everyone in his professional life reached out to him. Managers, agents, booking people, everyone – and it wasn’t to jointly commit him to an assisted living facility because of the tape. As an incredulous Lester describes it, “Everyone said ‘we love it, come in for a network test!’ and I was like, I’m sorry, what?”

Sure enough, he says, he went in for the Fox network test – but still wasn’t convinced it could be real. “I kept asking myself, like, what am I doing here? There are famous, recognizable actors in the waiting room, and I see a singer from one of my favorite bands.” If there’s a verbal equivalent of a headshake, Lester does it here. “So, I just decided to leave.”

The Carmichael Show was across the lot from the Making History audition, so he was going to head back to work. Of course, at that moment, the clouds parted, the sun shone brightly, and a PA called Lester’s name. Hours after a second “crazy weird” audition — this time opposite Pally — the job was his.

Almost a year to the day of the series premiere, Lester flew to Atlanta and shot the pilot. The rest unfolded in a way he still can’t accept. “I moved back to L.A. for, maybe, two days,” Lester says, in disbelief, “Then I had to be in New York for Girls. I was working on that when Making History got picked up by Fox.” He pauses. “I felt like the janitor who invented Flamin’ Hot Cheetos.” Wait, what? “A janitor invented Flamin’ Hot Cheetos! He was just some dude eating them, and someone came along, and was like, hey, this is gonna change your life. That’s how I feel. This pilot was just some weird thing I made, and now it’s going to change my entire life.” You heard it here first: Lester is the self-professed actor equivalent of the janitor who invented Flamin’ Hot Cheetos in the 1970s. To keep this metaphor rolling, that would make Making History the Flamin’ Hots of 2017. (As if viewers needed another reason to tune in.)

Working for Fox, as an actor, has been something of a fever dream for Lester. For example: In February, the network sent Lester and Pally to the Super Bowl just because. It’s now March, and he is yet to recover from the experience. “Going to the Super Bowl because I’m on a network TV show is right up there with enjoying cilantro,” on the official list of Things Yassir Lester Never Thought Would Happen. “I felt like a bastard child that people are being nice to. Or it felt like being the boy in The Blind Side. You’re just living your life, and a savior swoops in.” Even so, the transition from writer to actor hasn’t been entirely without incident. “I see why all actors are weirdos now,” comments Lester, “I’ve only dealt with the network as a writer. This side is a lot of anxiety and panic.”

It’s understandable then that he’s not involved with the Making History writing process – yet. His TV experience thus far was mostly with “heavily creator-driven” shows, and the concept of pulling “double-duty” during his first major acting gig seemed like the wrong challenge to Lester. He did, however, politely encourage the writers’ room to rotate in his brother Isaiah, whose work he deeply admires. “Isaiah is an extremely talented writer – truly one of the best joke writers I know,” Lester declares, “I wanted them to at least interview him, and they hired him!”

Of course, having his little brother write for him isn’t always ideal. Lester can tell that the stranger things his character says and does on the show have to come from Isaiah. And despite Fox News’ heavily conservative leanings, Fox Television is historically…not that way.  Fortunately for all, “Fox Television is all Hollywood. That Rupert Murdoch stuff never crosses over.”

Still, Making History isn’t afraid to be political. “We’re dealing with the founding of the country, and the implications of the set-up of that in modern society,” explains Lester. “I’m sure now, given the political climate, we can’t just be like ‘Our President is the worst person who has ever lived!’ on the show, but a lot of that is there.” A significant portion of the show follows the characters as they attempt to make changes to our nation’s history, too. Without getting too sci-fi jargon-y, if Pally’s and Lester’s Making History characters can do anything in the past to change the look of the future, they’ll try it.

The series draws elements from time-travel classics, so it only seems fair to ask: Who would win a Celebrity Deathmatch between the Making History duo and cult favorites Bill and Ted? “Well, it’s a two-fold answer,” Lester says, thoughtfully. “Pally and I, we’re professors, so we have knowledge on our side. Plus, we’re both in our 30s. As you get older, you start getting old man strength. So, I want to say us.” He pauses. “Bill and Ted, though, are young. They’re virile. Teens don’t care about anything, so they’re willing to die to do what it takes to win.” Is that the final answer? “I want to say we’d win the Deathmatch, but, if we take into account that I’ve seen John Wick 1 and 2 multiple times? If there’s anything of John Wick in Keanu’s character, we’d be screwed.”

Apart from Making History, Lester is working on his stand-up. “When you sign on to do a show, you’re kind of locked in,” he says. “It’s not that my arms are tied behind my back or anything” by Making History, but the series has taken up more time, and perhaps energy, than he’s used to. “Outside of your family, I think the most important thing in the world is being creative. I feel actual guilt when I’m watching something I’m not into, instead of being out there and working on something.”

Even though Lester feels that “in terms of public awareness, there’s literally no difference” between himself and a trashcan, it’s ultimately a good thing for him right now. In his eyes, there’s too much pressure on the artistic community to monetize everything. Lester’s personal philosophy revolves much more around the creative process. If there were an office gig that paid him to realize and/or manifest ideas, and everyone else there left him alone, he’d be perfectly happy. Alas, he’s been cast on a hilarious, inventive television series on a major network. He considers this point for a moment, shouts “MODELBOYZ!” and concludes the interview. Fair enough.

Making History airs Sunday nights on Fox at 8:30pm. If you missed last night’s pilot, you can catch up on demand or online today. 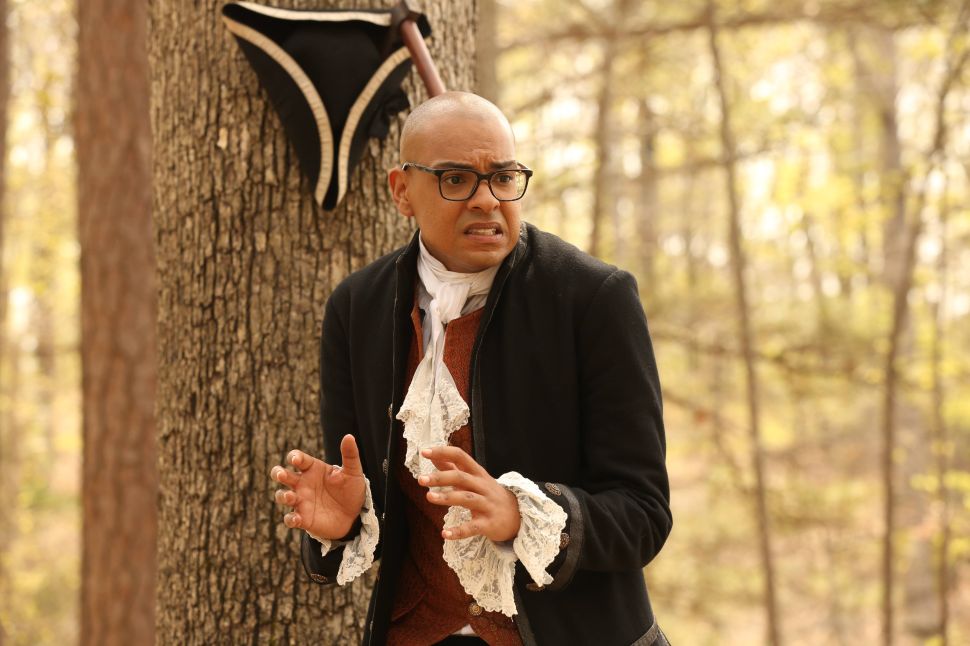