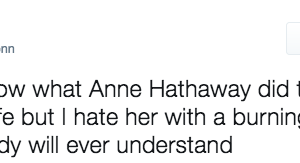 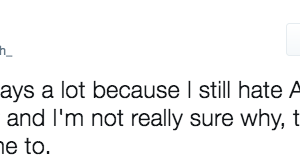 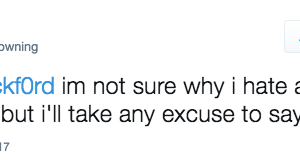 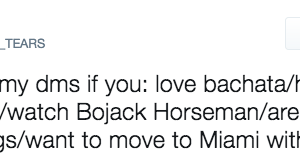 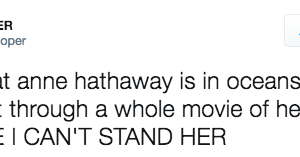 The actress, who had cut off her hair and sang live for the role of Fantaine in Les Miserables, just seemed like she was trying too hard. She’s fake. She’s pretentious. She reminds you of the annoying theater girl you went to high school with. She seems like she would start speaking with an accent after coming back from studying abroad. Or, perhaps the most popular explanation: I don’t know why I hate Anne Hathaway but she just annoys me for some reason.

I met Anne Hathaway last night at the party for her new indie film, COLOSSAL in which she plays an alcoholic Internet writer who discovers she’s controlling a giant monster terrorizing South Korea. “Hi,” she said, extending her hand. “I’m Annie.” She was not pretentious, or standoffish. She was friendly, and funny, and excited to see her friends from college who came out to see her. It was as if the “public” version of her as it’s been portrayed and joked about was in reference to an entirely different person.

But where did that public version of Anne Hathaway even come from? Hathaway isn’t a media-hungry person—seen partying or on red carpets to attract paparazzi attention. She’s a mother of a one-year-old baby whose public appearances are nearly exclusively because she’s promoting a film, or because she’s speaking for the Human Rights Campaign. She’s feminist, and funny, and not afraid to call out her interviewers.

“Are you trying to fit into a catsuit?” she quipped back when a male interviewer fixated her physique and asked about her workout routine for The Dark Knight Rises.

“I’m sorry that we live in a culture that commodifies the sexuality of unwilling participants,” she said to Matt Lauer when he asked about up-skirt photos of hers that had been publically distributed. When Lauer asked about her Les Miserables weight loss, she shot him down: “I don’t want to be seen as trying to glamorize it. Like, I did it to look like I was dying.”

Looking through her roster of films, there’s nothing about her career that indicates that Hathaway is snobby when it comes to her roles: she’s jumped from indies (Rachel Getting Married, One Day) to rom-coms (Bride Wars, Valentine’s Day, Love & Other Drugs) to big budget franchises (Alice in Wonderland, The Dark Knight Rises). Interstellar is a sci-fi film; Colossal is a genre-less, glorious oddity: outside of Les Miserables, there’s nothing about her career that indicates theatre-kid pretentiousness.

There’s something almost sinister in the way the inexplicable hatred for Anne Hathaway resembled the resentment towards Hillary Clinton. “She’s just not likeable enough,” was a near-constant refrain throughout both her 2008 and 2016 runs for the presidency. She was too contrived, too put together. She tried too hard (god forbid a woman try hard).

When Hillary Clinton was Secretary of State, her approval rating was an “eye-popping” 69%. By 2016, when she was running for president, her favorability had dropped to 40%. “America loves women like Hillary Clinton–as long as they’re not asking for a promotion,” a headline from Quartz read. We like successful women, until their success stands to elevate their power in a tangible way—with a presidency, an Oscar, or anything that resembles a woman acknowledging her own success or daring to point out that it might be deserved and rewarded.

After US Weekly revealed that Hathaway “practiced her Oscar speech a lot to try and be more likable,” the response was sneers. “It creates a new reason to be mad at Anne Hathaway. It’s one thing if she’s just being herself; it’s another if she’s trying to be likable and failing,” Gawker wrote.

As it stands, Anne Hathaway is a 34-year-old woman who is very good at her job, a woman who has made a few bad movies, several very good movies, and uses her platform to work as an outspoken advocate for equality around the world. If she just bothers you for a reason you can’t put your finger on, try—just try really hard—to figure out that reason, and see if it doesn’t turn out to be pretty sexist.