Adorable animals in peril, Nazis and Jessica Chastain fearlessly tackling a Polish accent heavy with paprika are the ingredients of the Holocaust drama The Zookeeper’s Wife. They don’t always comfortably congeal into a narrative smooth enough to keep you riveted for more than two hours, but they do deserve an A for effort in bringing to life another footnote from the archives of World War Two about brave resistors of tyranny risking everything to help more than 300 innocent Jews in the Warsaw Ghetto to escape the dangers of German atrocity. It doesn’t burn through the conscience and haunt you forever like Schindler’s List, but in spite of its laid-back reluctance to shock and horrify, it’s never trivial or boring.   After the end of the war in 1945, they rebuilt the Warsaw Zoo, which remains a tourist attraction to this day. The role it played in defeating the Nazis is fascinating. Let’s face it—the details of every true survival story in the worst chapter in the history of the 20th century is worth telling, no matter how many times you tell it.

The Zookeeper’s Wife spans seven years in the heroic lives of Antonina Zabinski (played with an inspired lack of American glamor by Ms. Chastain, who also co-produced) and her husband Jan (stoic Belgian actor Johan Heldenbergh), owners of the Warsaw Zoo. In 1939, when the Nazis invaded Poland, they dedicated themselves to the protection of both their beloved animals and their Jewish friends and neighbors. Angela Workman’s screenplay, based on the 2007 bestselling book by Diane Ackerman, chronicles the effects the war had on the inhabitants of the zoo, animal and human alike. Animal lovers are guaranteed to respond to scenes like trustful lion cubs and screeching monkeys, disoriented and terrified by Hitler’s bombs, and a baby camel lost and running aimlessly through the zoo without its mother. While colorful parrots and enraged tigers flee their cages in the noise and confusion of the advancing tanks, loyal guards who have been employed by the Zabinskis for years try to bury a humongous hippo. Then, by 1940, it’s the people whose lives are in jeopardy. Without a single thought of heroism or courage, the Zabinskis turn their haven for animals into a human sanctuary, turning their cellar into an Anne Frank-like hiding place for the prisoners they rescue from behind the walls of the ghetto, trying simultaneously to keep their endeavor a secret from Lutz Heck (a suavely menacing Daniel Brühl), Hitler’s leading zoologist, who proposes to give the animals shelter and safety in a German zoo until the war is over, naively refusing to think the war might eventually destroy Germany, too. In actuality, to the Zabinskis’ distress, Lutz just wants the remaining animals killed and stuffed by a taxidermist, via the orders of Nazi propaganda minister Josef Goebbels.

From the plight of the animals and near-detection close calls for the “guests” in the cellar, to the zookeeper’s capture and the evacuation of the Warsaw Ghetto, director Niki Caro recreates the final years of the war on the European front with a convincing accuracy that is alarming and deeply touching. Unfortunately, for a role rich with possibilities for emotional fireworks, Ms. Chastain has little to do besides pine for the animals she calls “Sweetheart” and placate the evil Lutz, who pines away for her. Mr. Bruhl does a lot to make Lutz as much a victim of war as well as a cruel Nazi cliché, but his three-dimensional character arc is never fully explored. In the same vein, Ms. Chastain’s most revealing emotional scene has nothing to do with the war at all but involves, instead, saving the life of a baby elephant.   She’s a powerful and dedicated actor but in the end, it’s the animals who conquer the emotions and provide the suspense in The Zookeeper’s Wife. 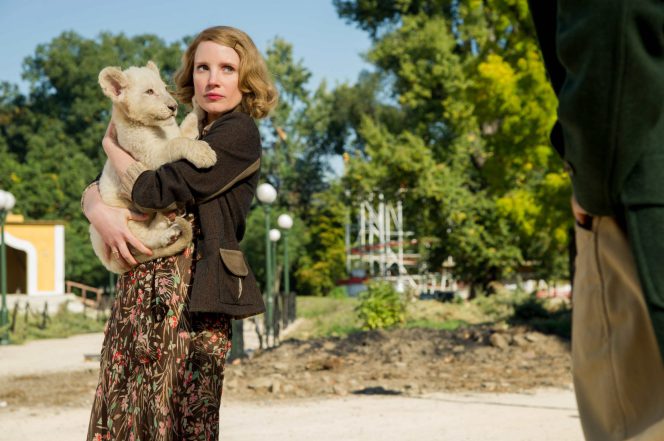