At one point you may have asked yourself, “I wonder what it was like to be in the audience at the 2017 Rock and Roll Hall of Fame Induction Ceremony at Brooklyn’s Barclays Center on Friday night?”

While that’s an oddly specific and mouthful of a question, you’re in luck because I am happy to inform you that this writer, whose very words you are reading right now and are presumably immensely impressed by, was granted access to rock’s most important night this year’s show.

Here are my dispatches from deep inside the Barclays. Ride with me.

As the show is about to begin and I take my seat, I realize that this night will be great no matter what happens considering my table is outfitted with not only wine, but cheese and dessert plates.

The proceedings open with an introduction by Rolling Stone editor Jann Wenner and a tribute to the recently deceased Chuck Berry, one of rock’s founding fathers and a man who would be no doubt puzzled by the fact that ELO was chosen to honor him. (Though to be fair, frontman Jeff Lynne later noted he’d cover Berry songs throughout his career.)

And in case you were wondering how a ceremony devoted to all things rock kicked off musically? With Beethoven’s “Fifth Symphony,” of course. Ah, the sweet sounds of royalty-free melodies.

To ELO’s credit, one of the best performances of the night was their rendition of 1975 hit “Evil Woman,” which sounded exactly like the recording.

Joan Baez gained wide acclaim as one of the faces of the ’60s folk movement and fought her entire life for peace and equality. Naturally, one of the biggest reactions from the audience during her induction speech came when Baez mentioned…Taylor Swift. Apparently Joan’s granddaughter is a fan of Swift and she managed to score backstage passes to one of her shows. It must have been an incredible moment: a true legend and Joan Baez in one room together.

Of course that’s a joke, but thanks to her hipness and message of equality, the audience was super into how “with it” Baez came across, Swift-references and all. She was, as I hear kids say, “woke.”

If the audience was electrified by her pure “wokeness,” well, that came crashing down when she performed an understated acoustic set with the help of the Indigo Girls and Mary Chapin Carpenter, no doubt beautiful and crisp, but out of place considering the audience was in the mood to rock out and not, for lack of a better phrase, folk out.

Speaking of, a classic complaint echoed every year is exactly what kind of artist qualifies as a “rock” artist.

If you were to name the genre that the Baez and fellow inductee Tupac Shakur embodied, would the word “rock” ever cross your mind?

Or is “rock” more of an idea and an attitude, rather than a sound? On second thought, paraphrasing the wise words of Winston Churchill, when it comes to how artists are chosen for induction into the Rock Hall: “It is a riddle, wrapped in a mystery, inside an enigma.” With that said…

At this point two guys from Rush came out to induct the band Yes, the highlight of which, for myself and many in the audience, was the bizarre quirkiness and utter absurdity of keyboardist Rick Wakeman, who, presumably in lieu of 10 p.m. slot at the Comedy Cellar, used the induction opportunity to tell some jokes.

“My father was an Elvis impersonator,” Wakeman said. “But there wasn’t much call for that in 1947.” Rimshot!

But that’s not all. Mentioning that the Barclays is located not far from his “first meaningful sexual experience,” Wakeman also detailed the process of how he learned to play the keyboard. Psych! He actually talked about getting a prostate exam instead: “Whilst I was having my examination, the doctor said to me, ‘Mr. Wakeman, there’s no need to be embarrassed. It’s not unusual to get an erection with this kind of procedure.’ I said, ‘I haven’t got an erection.’ He said, ‘I know, but I have.’ ”

Wakeman actually said that. This is not fake news. But hey, to each their own. If Joan Baez wants to talk about peace and equality, then Rick Wakeman can talk about prostates and erections, dammit!

Cue: Snoop Dogg. The rapper, whose last taste of marginal relevance was for briefly changing his moniker to Snoop Lion for some reason, was there to induct his late friend Tupac Shakur.

Dogg’s speech detailed their friendship (they went parasailing once!) and how Tupac inspired him to pursue acting.

When it came time for the performance portion of Tupac’s induction, the likes of Alicia Keyes and T.I. took the reigns, making for a spirited set. One major disappointment however was the fact that Hologram Tupac was nowhere to be seen. That hologram needs a better agent.

Most nights, the floor of the Barclays is rife with the action of their home team Nets playing a game they’re probably about to lose. Tonight, however, that very court was home to a very different kind of missed shot: having a Steve Perry-less Journey perform with someone who was essentially a Steve Perry impersonator.

Leading up to the show, there were rumors swirling about whether or not Perry would perform, with fans excited by the fact that after exactly 30 years of splitting with his old band, Perry and Journey would once again join forces. Alas, it wasn’t to be.

With Perry giving no explanation, Arnel Pineda (who currently handles vocal duties) stepped in and while he did a great job, Pineda could have handed each member of the audience a chunky stack of hundred dollar bills and people would have still been bummed that Perry didn’t hit the stage. After all, it’s a night tailor-made for unforgettable moments and this one was, well, the opposite of that.

Things did perk up when Pharrell introduced his “Get Lucky” collaborator Nile Rodgers, who wasn’t inducted but rather given something called the Musical Excellence Award. Confused? So was Nile. “I want to be happy, but I’m perplexed at the same time,” he told Rolling Stone.

Clearing up the confusion, Lenny Kravitz took the stage and became the latest in a long line of artists to honor Prince. Dearly beloved, we are gathered here today to get through this thing called “a very long induction ceremony.”

Finally time for the home stretch of the proceedings, a bearded David Letterman (filling in for an ailing Neil Young) appeared to honor Pearl Jam, continuing a long relationship between the rock band and former talk show host that capped off when they played on his final show in May 2015.

Despite rarely making public appearances since, Letterman was his typical sharp and hilarious self, even when showing a picture of his young son Harry nonchalantly holding a cigarette.

When it was time for Eddie Vedder and company to give their speeches and subsequent performance, the audience was rapt with joy.

It was clear just how devoted Pearl Jam fans are: not only did they make the loudest noise throughout the night—they sat through the past five-plus hours to make it to this very moment.

As another induction ceremony wrapped up and the clock vaulted past midnight, I left the Barclays an enlightened person. 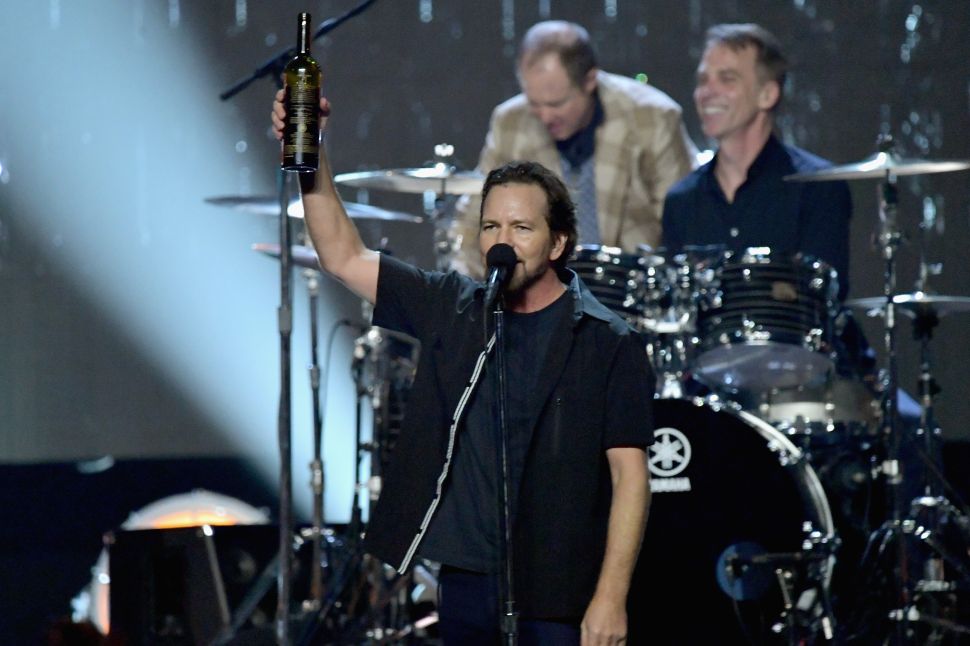