Who would have thought that a show about a lovable bunch of secret agents and superhumans would become one of the most politically charged shows on television? Agents of S.H.I.E.L.D. is basically Marvel’s VEEP. The episode “All The Madame’s Men” starts with a special news report by Sunil Bakshi who I mentioned in my last recap. The news is blaming the resistance for attacking the Hydra “enlightenment center” and also talks about how the Patriot was killed in the incident. It’s a good start to the episode to show you just how effective and misleading controlling the media can be *cough* *cough*. But what you really want to see is what happened with Daisy who ended last episode in the Terrigenesis process. Well she emerges and with a little help from May who is good again kind of I guess, they take out some Hydra agents and go on the run. She realized that if Mace was willing to sacrifice his life for the cause, that maybe she is on the wrong side. There is a great gunfight scene and I don’t know if it felt weird to anyone else but it felt jarringly cinematic. Most of the shootout scenes in Agents of S.H.I.E.L.D. have always just been exchanging fire but this time we have May doing John Wick flips and squibs are popping off all over the place like bottles in the club (I felt so old writing that). The scene comes to a halt though as Madame Hydra herself pops out of the elevator and realizes the agents apparently can’t outrun their true natures. Daisy’s answer to this is to quake her right out the window and Aida’s body falls to the ground below. Savage.

The fall wakes Aida out of the Framework machine and we finally get to see our old pal Anton Ivanov whose name continues to be almost too Russian. He tries to kill May while she is strapped into the Framework after Aida expresses her displeasure with her betrayal but he finds out he cannot pull the trigger. Turns out Aida is still a slave to her programming and she cannot directly harm any of the agents. Since one of her primary objectives is to protect them, she is hoping to use the loophole she used on Radcliffe and if they get in her way and put the Framework at risk, then she can kill them. Unfortunately for Anton, since Aida’s programming won’t allow her to kill anyone, neither will the programming she gave Anton. However, Daisy and Jemma are now considered threats to the Framework and Anton is given the order to hunt them down.

The news about the attack on Madame Hydra makes its way to the S.H.I.E.L.D. agents who are trying to figure out what to do next. Triplett wants to look at the plans he stole from Hydra and Ward wants to go look for Daisy who he now knows escaped and is on the run. We get to learn a bit more about the alternate world version of the agents like Coulson being asked to join S.H.I.E.L.D. years ago but being afraid that it was too much responsibility and Ward coming out of prison and meeting Victoria Hand instead of John Garret (RIP Bill Paxton) and the path to Hydra. While the agents split up, Jemma takes a look at Tipp’s stolen plans and recognizes the blueprints as the matter machine from the Ghost Rider story arc of this season. Not only that, but she believes that she knows where this machine is being built: Anton’s oil rig.

Aida is lying in a bed unconscious with Fitz and his father at her side. The doctors reveal that there is damage to her spine and that she may not be able to walk again. I figured Aida was a sort of God in the Framework so it seems strange that she can actually be hurt in it. Fitz is pissed off about it and his father is riling him up more and more. He even calls Fitz the new head of Hydra. Bakshi visits Fitz in hopes of an interview with Madame Hydra but he won’t allow it. Instead, Fitz wants to make the public afraid and so Bakshi talks about Daisy and May on TV and that it’s the citizens’ civic duty to report anything they see and so the manhunt begins. It all works as people run in fear when they see Daisy and May on the streets. When Aida wakes up, all she tells Fitz to do is to complete the machine and that soon, her body and this world won’t matter.

So Trip and Jemma have taken a jet to check out the oil rig and Ward is out looking for Daisy who has had a slight altercation at a S.H.I.E.L.D. safe house with some Hydra goons. The agents want to go check out the reported safe house but there’s no one left in charge so Coulson steps up and finally gets back into the leadership role and decides to go investigate. May and Daisy still have Hydra agents hunting them down but Mack and Coulson show up just in time. There is some hesitation between Mack and May because of the whole abducting his daughter to entrap an Inhuman thing but Coulson stands up for May and the situation settles down. And unfortunately, the oil rig is a dead end for Jemma and Triplett who discover that it’s completely abandoned. Jemma does realize however that although the machine isn’t being built there in this reality, it’s being built there in the real world and that Aida’s ultimate plan is to somehow use the machine to make herself a real person. Trip does mention that when he was captured, Hydra was only a week from being done but that was a week ago soooooooo that’s not good.

Alistair Fitz (Fitz’s dad, it seriously took me forever to find that on Google after last episode) has to let Fitz know that Daisy and May escaped. This prompts Fitz to lash out against his father who quickly strikes back and you can see that Fitz is till very scared of him. Alistair goes to interrogate Radcliffe after and it ends with Holden getting his face punched like a lot after he says that Fitz’s dad is a disappointment and a drunk in the other world and that he is nothing without his son. We still don’t have much to talk about with Fitz’s dad and honestly I don’t know if I really care to know more about him when Leopold Fitz has been so much more compelling this season. Fitz does finish the machine’s design and his only request to Aida is for her to take him with her when they use it. What does that mean? What would happen? Who knows?

The episode ends on a different note. It isn’t action packed or a big reveal, it’s about hope. Daisy and Ward are reunited but it’s bittersweet as Ward realizes that he won’t be going to the real world and really hopes he can have the Skye he loved back when it’s all over. They also decide that to save the world they will have to fix the world first so they make a visit to Sunil Bakshi (who is hitting on a coworker because why not add one more unsubtle current event reference). They take the station hostage and they record a message from Coulson telling the truth about the recent attacks and denouncing Hydra. Ward stays at the station to guard the signal and to make sure no one interrupts it. He wants to redeem himself in their eyes and doesn’t want to be the Ward that they knew. The footage of Mace being a hero is seen around the world and Coulson’s inspirational speech even has citizens showing up at the news station who want to take back their world from Hydra. It’s the start of a revolution but in the real world, Anton has found the quinjet Jemma and Daisy are on so they are going to have to act fast. Until next time, True Believers! 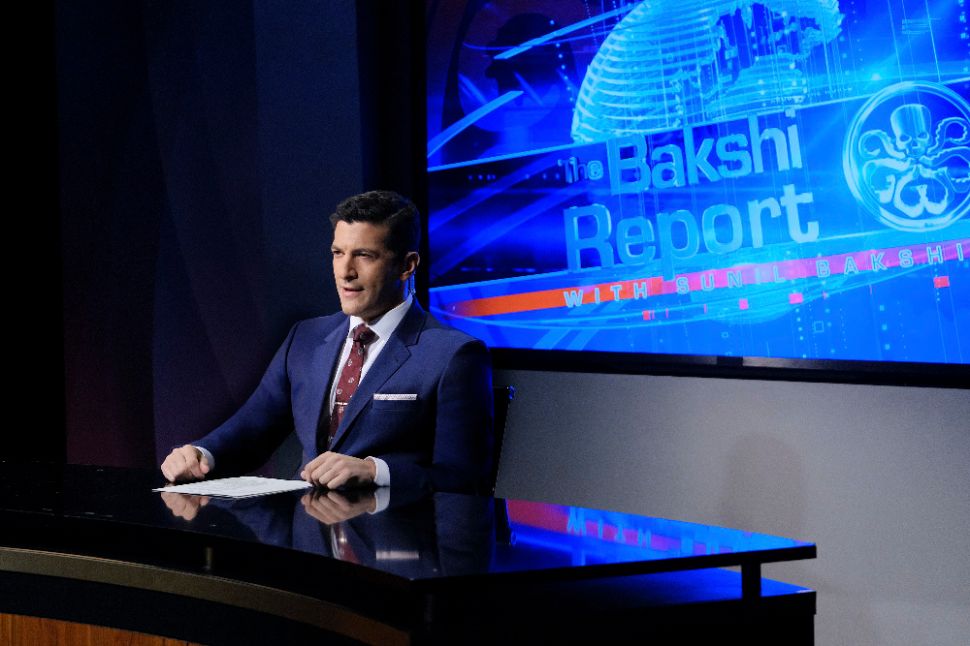