Welcome back, everyone! The last time we spoke, the world seemed like it was falling apart. Up was down and down was up. But luckily Marvel’s Agents of S.H.I.E.L.D. is finally back as an exciting distraction from current events and politics! I’m sure watching the start of the new story arc won’t have any parallels to what’s going on in the world right now! Uh oh. Oh no. Oh my.

The latest episode “What If…” picks up right where the LMD arc left off. Aida had trapped some of the agents in the Framework and it was up to Daisy and Jemma to go in and save the day. Unfortunately, upon entering the Framework they were treated to a nasty surprise: the world was broken. We’ll get into what some of the agents are doing as the episode progresses but let’s deal with Jemma and Daisy first.

Daisy wakes up in a bath to a text message telling her to wake up her boyfriend and come into work. And who is the boyfriend? She thinks it could be Lincoln but instead, it’s GRANT MOTHER F&#%!&@ WARD! HE’S BACK! Not only that, but he’s calling Daisy “Skye” now (great we have to deal with the multiple names again). She has no powers, she has longer hair and they are both Hydra! AH! There is so much going on! We even get the fancy new intro credits to kick off what could very well be the final story Agents of S.H.I.E.L.D. tells, “Agents of Hydra.” Now, what is this world like? The radio talks about an Inhuman child being apprehended at a market before they could “do anything;” A road sign says, “If you suspect it, report it for humanity;” and an Inhuman is getting the crapped kicked out of them by some Hydra guards. Basically, the world is not good.

Skye/Daisy/Quake and Ward drive to the Triskelion which is now Hydra’s main base because why waste good architecture? They even have a nice Hydra sculpture in the main lobby and honestly, no one gives Hydra enough credit for their knack for interior decorating. Ward and Daisy have a little lover’s spat about possibly living together and how Ward isn’t ready to take that step (guess the Framework can’t fix commitment issues am I right?). But Daisy uses this opportunity to look through Hydra’s files to find out that Lincoln died during Inhuman testing some time ago and Jemma had died along with 200 other S.H.I.E.L.D. agents due to a contamination. That’s not good.

But what is good is ZOMBIE JEMMA!!! Just kidding. She does realize that she was actually murdered but now that her consciousness is uploaded into the Framework she’s back, baby. She crawls out of the abandoned S.H.I.E.L.D. academy and manages to flag down a car for help. She’s picked up by Julia (a stranger and honestly you don’t have to remember her name) and although Jemma is still a little shaken up and disheveled, she’s amazed at the level of detail that exists in the Framework. Julia is basically an NPC (Non-Playable Character) in a video game. She isn’t real. She’s merely data that exists to give the player a feeling that they are actually interacting with others. But Julia mentions her dreams and interests and Jemma can barely believe it. They run into trouble when they two of them pull up to a Hydra checkpoint. It seems they do random checks and searches looking for Inhumans. Clearly, there are no parallels here. Let’s move on. Jemma shows her S.H.I.E.L.D. badge but Julia freaks out at the sight of it and kicks Jemma out of her car who is forced to run away.

We had seen May at the end of last episode working for Hydra within the Triskelion but we couldn’t tell much about her role. It does seem she has significant power within the organization but doesn’t seem to be the Director of Hydra. She does have a mission for Ward and Daisy though: Interrogate an Inhuman that they have locked up for potentially smuggling Terrigen gas. Thing is, Daisy recognizes the Inhuman. As she and Ward begin talking to him, Daisy reveals he has a fake ID and is actually none other than Vijay Nadeer, Senator Nadeer’s brother who we last saw at the bottom of the ocean in the real world. And then Grant Ward punches him and knocks him out before we get much more info out of him. It is interesting to note that it is not considered illegal to be Inhuman but it is apparently illegal to lie about it so perhaps there is a system for registration? Who knows. May steps in to stop the interrogation and Vijay brings up the incident in Bahrain upon recognizing May. He even says that it wasn’t Hydra that made people hate Inhumans, it was May that started it. May then orders Vijay to be brought up to “the Doctor.” Who is the Doctor? IT’S EVIL FITZ!

Jemma is still having a bad day. She’s just trying to figure things out. While looking for safety she gets withheld by two Hydra agents for not having an ID. Both sort of look like Paul Scheer if you squint. Not important though. They realize she is supposed to be dead and she takes them both out before they can do anything. Using their equipment she searches for info on Daisy, which offers no results (she would be listed as Skye), looks up Fitz who is considered restricted, but does manage to find Coulson in the system!

Phil Coulson: Teacher. Yup, the former Director of S.H.I.E.L.D. is now a John Oliver-suit-wearing educator. Not only that, but he’s giving a lecture on fake news, media control, and how Hydra brought the world together after an incident with a refugee girl from Bahrain. Oh god, we are at max parallels right now.

One of the students asks about Hydra’s ties to Nazis and brings up that they used to be the Nazi’s science division but Coulson says that’s all just propaganda. Ugh. Also, students are being abducted from the classroom for possible Inhuman questioning. It’s a lot to take in.

Jemma goes to visit Coulson (and stop off to pick up the extraction button they planted last episode? Honestly I forgot all about their exit plan) but Coulson has no memory of Jemma. She tries her best and gives a beautifully passionate speech (Elizabeth Henstridge is killing it this season) but to no avail. I will give Coulson credit; Jemma does a great job of making herself seem crazy. But she does notice Coulson’s hula dancer on his bookshelf and she brings up Tahiti and how “it’s a magical place.” Which seems like it struck a chord with Coulson but he still kicks her out and puts in a call to report a subversive. However, later on, Coulson does open a folder to find a bunch of seemingly unrelated documents he’s collected but upon closer inspection, you will see there is a news story about Felix Blake (former S.H.I.E.L.D. agent that later founded the Watchdogs) who is praised as a Hydra hero. There’s a clipping about a Winslow doctor (Calvin Winslow AKA Calvin Zabo AKA Mr. Hyde AKA Daisy’s father’s veterinary clinic) and an ad for a string quartet mentioning the Cellist (Audrey Nathan AKA Coulson’s former love). There’s also a calendar page with a picture of Coulson’s beloved Chevrolet Corvette, Lola, and some rough sketches of the S.H.I.E.L.D. logo. Finally, there is a postcard from Tahiti and pages with “It’s a magical place” written over and over. Seems Jemma wasn’t so crazy after all.

Let’s get this out of the way: If you like Fitz, it’s going to be a rough story arc for you. Fitz is a dick. And evil. But mostly a dick. He is torturing Vijay Nadeer to find out more about his potential powers and he’s just mean to Daisy and I don’t like it. I mean Iain De Caestecker does a great job but it’s so strange seeing him as a villain now. May comes in to let Fitz know that there was a phone call put in from a Phillip Coulson talking about a subversive and luckily this catches Daisy’s attention. Daisy goes to leave but gets stopped by Ward, who believes she has been acting differently all day. Quick thinking, Daisy just blames Ward rejecting her proposal to move forward and says she needs her space. She does finally make her way to the bench and meet up with Jemma (YAY!) and they are both shocked to find out that one of them is in Hydra and the other died (most likely killed by Hydra). It’s a happy reunion that’s cut short by Grant Ward, who has the two of them at gunpoint.

Grant is yelling at them for answers and just as more Hydra agents start to show up, WARD SHOOTS THE HYDRA AGENTS! HE’S THE RESISTANCE! IN THIS WORLD HE IS A DOUBLE AGENT FOR THE GOOD GUYS! AH, THIS SEASON IS THE BEST!

Ward, Daisy and Jemma all manage to get in a car and escape and after a little car chase scene we find out he was the mole that got Vijay the forged documents and he also was the one that kept Daisy’s Inhuman genes a secret from Hydra. Ward says they will talk again but for now, they split up. May reveals to Fitz that Jemma got away and apparently this info is going straight to the Director of Hydra (oh boy).

Now Jemma and Daisy realize how difficult this is going to be so they decide to use the extraction button to go and grab backup but for some reason, it doesn’t work. It’s almost like someone found out about them and made it so they can’t escape. It’s almost like someone has control over this entire world. It’s almost like that very person could also be the Director of Hydra I mentioned three sentences before I decided to do this dumb build up. AIDA IS THE DIRECTOR OF HYDRA! Not only that, she’s basically taking on the role of Madame Hydra from the comics! And yes she was the one that shut down the loophole for Jemma and Daisy to escape. Fitz visits her and is adamant that he will not allow them to destroy what he and Aida have built and then THEY KISS! AHHHH THIS SHOW! What an ending. It actually goes on a bit longer to show Coulson getting in his car only for Daisy to be hiding in the back seat. She tries to get him to remember and he still has the hardest time but at the very end he looks up and says “Daisy.” AHHHHHHHHHH! ALSO, THERE IS A BILL PAXTON TRIBUTE AHHHHHHHHHHHHHHHHHHHHHHH TOO MANY GOOSEBUMPS. Okay, that’s a good place to stop at. Until next time, True Believers! 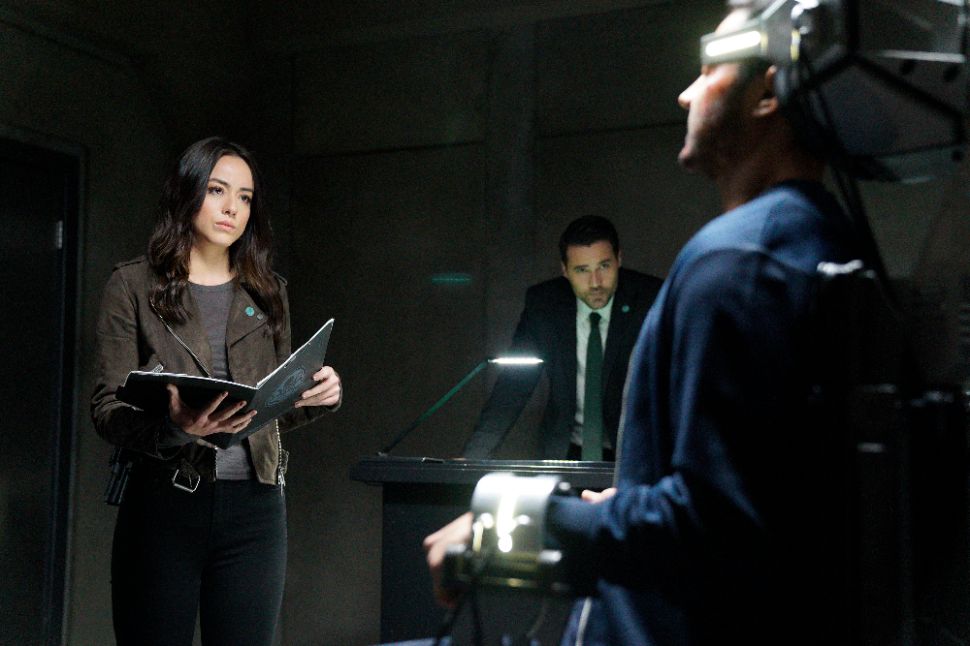