Oh, terrific, another Agents of S.H.I.E.L.D. epis…is what I would sarcastically say a couple seasons ago but now I find myself actually looking forward to each new episode. This week’s episode “No Regrets” didn’t move the plot as fast as some of the more recent episodes but it did pack some great character moments, some exciting action, and built to what I can only imagine will be a hell of an ending.

First of all, if you were curious about the Mace/Patriot power situation well we find out he is strong. Super strong. And it looks like there’s no help from any fake superhuman serum – He’s the real deal. Mace and Coulson are making a fake accident to get a Hydra prison bus to stop and pull over in hopes Daisy and a secret “other passenger” being on it. The bus does show up and Mace takes everyone out but they only find body bags. It’s not a total loss, however, since they are going to get Mack to fix up the bus to potentially sneak into a Hydra prison camp and try another attempt at a rescue.

Daisy hasn’t been moved from her cell and is still getting beat up by Hydra goons. Iain De Caestecker is still killing it as Fitz and it’s a lot of fun to hate the guy while he gets to act like a straight up dick. Fitz wants to know where Mace and Jemma are but she still refuses to tell him. Meanwhile, Aida/Madame Hydra and May/Just May are talking about a weapon that could eliminate the Inhuman threat and whatever it is, May volunteers for it. If there’s one positive about Hydra, they certainly are dependable. Turns out it’s a super strength serum that should be strong enough to defeat Mace. Is it strong enough? I guess you’ll just have to wait a couple paragraphs and find out (please don’t skip ahead. I need you to keep reading. I need this).

There is some distrust brewing between Jemma and Mace and she wants to tell him about why she is really there but Coulson believes he would never accept it because he has no memory fragments like Coulson had. Coulson does ask why he feels an uneasiness when he’s around Ward and Jemma clarifies that they didn’t have the best relationship (the whole crushing his chest and leaving him to die on a planet thing). She does end up telling Mace and Ward everything and as Coulson predicted, they aren’t convinced. Mace gives a beautiful speech about all of the memories and details of his life and how they mattered to him so they couldn’t be fake or for nothing. Ward even asks Jemma if maybe she was in the simulation and now she’s in reality which, to be honest I was like ‘oh damn that’s a good point’ but then my brain started to hurt. Mack steps in later and Jemma gets to meet his daughter, Hope. Hope is probably the one good thing to come out of this virtual world. Now with the bus good to go and Coulson being given some fake Hydra credentials, they are ready to infiltrate.

Aida is asking Fitz about how the interrogation is going and Fitz drops a “nevertheless she persisted” line because this show is about 2017 and not Hydra as a matter of fact. Aida tries to tell Daisy that she didn’t plan this world; that all she did was take away one regret of the people in the Framework and this was the path that it lead to. She even says that if Daisy helps her, she can give her back Lincoln. All Aida wants in return is a world where she has a choice. Which like, is fair, cause if you make something to act like a human, chances are they are going to want to act like a human and not your personal computer. Radcliffe is still throwing a tantrum in the adjacent cell and Daisy has to be the voice of reason. He can’t deal with this world since losing Agnes and I really wish they had used this time to dig into some more emotional themes of losing someone you already lost once and to lose someone that was merely data. It was a vulnerable moment and it would have been nice to dig deeper. But what he does reveal is that he created a backdoor to the program, one that Aida can’t destroy but we won’t find out what that is until next episode.

Coulson successfully sneaks into the Hydra prison camp by hiding Ward and Mace in some spare body bags and they begin to search the compound. There is a great one off comment that Coulson makes about Bakshi news, which you may remember Sunil Bakshi from season 2 was a Hydra contact who by the sounds of it is doing a lot better in this reality. Anyways, Coulson and Mace find people locked up like animals in cages and they let them out and it just so happens one of the prisoners is the mystery man Mace was looking for: AGENT ANTOINE “TRIP” TRIPLETT! Former Agent of S.H.I.E.L.D that died in the ancient Kree city back in season two. One more plus for this world I guess! Trip had taken some photos of the weapon Aida and Fitz are working on using his grandfather’s old Howling Commando’s gear so he has to get them to Mace but Coulson notices one of his old students are being transferred to the quarantine area so the two split up.

Now we’ve gotten to see what some of the Agent’s regrets were: May’s was Bahrain. Mack’s was his daughter. But we don’t know how Fitz ended up this way. Introducing Fitz’s father. He’s actually proud of his son becoming an evil dick bag but when Fitz starts to say he regrets killing Agnes, his father says that’s his mother in him talking. Apparently, because of his newly established relationship with his father, there wasn’t enough room for compassion AND being a monster. Anywho, May approaches Fitz to tell him that there was an unscheduled drop at a prison camp and she figures it must be Mace so she is sent in a Quinjet to investigate. But first Fitz injects her with the super strength serum (which has an hour long life span but for whatever reason they inject her before the flight over to the camp so May is just going to be all jacked up waiting in her seat and whatever this was the first big stretch of logic in a while with this show so I’ll let it slide. At least it’s not a United flight am I right? Haha this recap will age well).

So Triplett delivers the film to Mace who hands it off to Agent Burrows just as May’s jet is coming in. Realizing there is going to be trouble, Triplett and Mace go after Coulson. Ward gets the call that things are going south and is coming in for back up. He’s going to bring Mack but Jemma stops him and volunteers herself because now she knows Mack has a daughter to lose. This plays into the whole is it real if it’s real to them thing Mace brought up and apparently it’s all looking real now to Jemma. Plus she brings up that if something happens to Mack in the Framework, he will be affected outside of it too. Hint hint. On their route to Coulson, Mace gets ambushed by a super powered May and we get a fun little super hero fight and unexpectedly Mace wins but lets May go. She, however, calls Fitz and he orders the Quinjet to bomb the prison site. Meanwhile, Coulson is in the quarantine area only to find a bunch of kids being brainwashed A Clockwork Orange-style. All of the agents show up to try and get the kids out of the building in time but it’s crumbling around them. May runs in to make sure that Mace gets killed in the destruction but is surprised to find kids in the compound. Mace is now supporting the entire building from crushing everyone and we get to see Mace be the hero he always wanted to be. Even May acknowledges his sacrifice with a slight nod as everyone escapes and the building falls upon Mace.

The final scenes show Fitz and his father drinking Champaign in celebration together and real world Aida (not Madame Hydra Aida) walking over to the agents in the Framework machines and approaching Mace’s body only for the vitals to flat line. It’s a bitter note to end on but it’s not without a little hope as May walks into Daisy’s cell and asks if she truly is Inhuman. May reveals a Terrigen crystal and with a dramatic smash, Daisy undergoes Terragenesis. Oh boy. Until next week, True Believers! 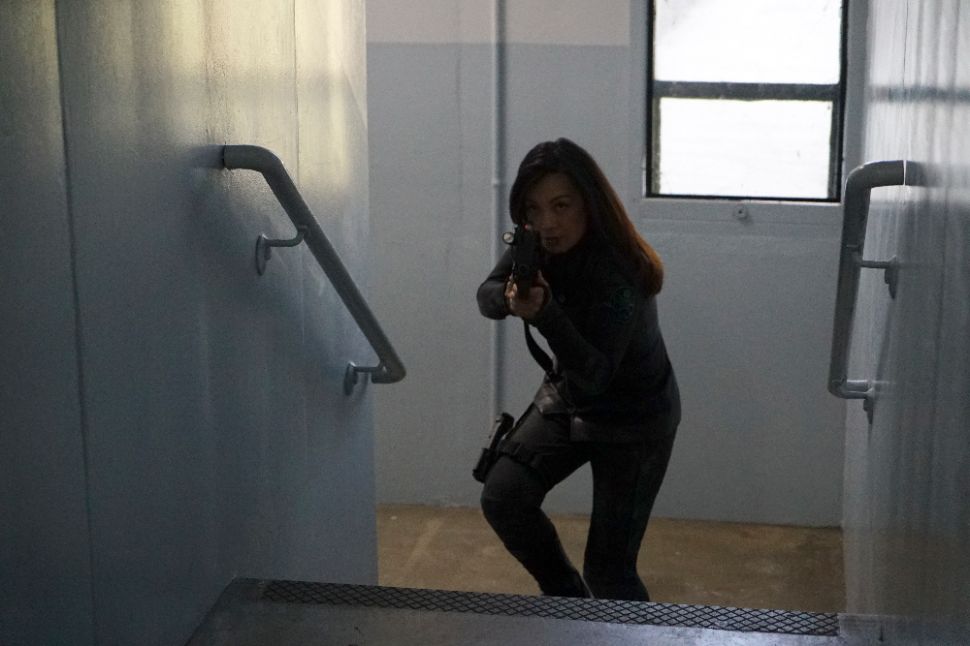