It’s just after 11pm on Easter Sunday and transsexual model/singer/performance artist/nightlife personality/muse and now author Amanda Lepore is almost ready to leave for work. Sheathed in a custom-made skin-tight, sheer dress trimmed with powder blue marabou feathers, her bouncy, balloon-like breasts bulls-eyed with crystal pasties, Lepore’s work look is part Jayne Mansfield, part Jessica Rabbit. It’s as if Russ Meyer and RuPaul had a baby. This evening Ms. Lepore will appear at the club promoter Ladyfag’s weekly party Battle Hymn, and well, she will just be herself. And get paid for it.

Amanda Lepore makes her living simply being Amanda Lepore. The 49-year-old (born on November 21, 1967, she celebrates on Dec. 5 because her real birthday is “way too close to Thanksgiving and too hard to celebrate.”) was famous for the sake of fame well before Kim Kardashian ever made a sex tape or a reality TV show. Her cartoonish Alberto Vargas appearance, the result of numerous plastic surgeries, has made Ms. Lepore a transsexual poster girl, modeling in campaigns for Armani Jeans (alongside actor Ryan Phillippe) and M.A.C. Cosmetics and posing for photographers Steven Klein, Terry Richardson and David LaChapelle who discovered Ms. Lepore in the 90s and made her his muse. Since meeting Mr. LaChapelle, Ms. Lepore has recorded a solo album (2005’s Introducing… Amanda Lepore), made cameos in music videos for Elton John and The Dandy Warhols and appeared in the films Party Monster and Zoolander. Ms. Lepore’s latest project is her most personal and for someone known to arrive at parties completely naked, her most revealing: a memoir. Penned with a ghostwriter, Thomas Flannery Jr., “Doll Parts” charts Ms. Lepore’s path from a feminine boy growing up in suburban New Jersey to a teen bride to her sex change operation at 17 and her move to New York where she toiled as a dominatrix, joined the club kid scene and eventually became who she is today: an internationally known trans-icon that counts Lady Gaga, Pamela Anderson and Christian Louboutin as fans. “I hate everyone but Amanda Lepore,” Miley Cyrus once said.

“I’m not a writer. I was really nervous that it wasn’t going to be good,” Ms. Lepore said, speaking of her memoir as she  reclined cat-like, on a bed in her dressing-room size apartment at Hotel 17 near Stuyvesant Square in Manhattan. Towers of Christian Louboutin shoe boxes (size 38) flank a wall. Leopard pillows are strewn everywhere. A large gilded mirror hangs above her bed. “I didn’t want it to be heavy or depressing. I was worried that it wouldn’t be funny, or fun.”

Ms. Lepore’s memoir is not all champagne and sequins. Her mother, a German-American housewife suffered from schizophrenia and was routinely hospitalized. Her father, an Italian-American chemical engineer abandoned the family when Ms. Lepore was 14. “I have a really good memory and the early part is not all good memories. I didn’t like doing it at first. My mother is always on my mind.” Ms. Lepore paused and straightened a bejeweled half-glove. “I don’t think about the past – especially those years. I live in the moment.”

Born Armand Lepore, at 10 she saw a program on television about gender reassignment surgery and announced to her parents that she wanted a sex change. “I thought I was a girl,” she admitted. At 15, she befriended Bambi, a transsexual stripper, who traded her hormones in exchange for sparkly G-strings and bikini tops that Lepore designed at home. With her disapproving father out of the picture and macho brother never home, she started dressing as a girl. Her mother bought her Revlon lipstick and a padded bra. She dropped the r from Armand, added an a, and became Amanda. “I was always Amanda, even when I went by a different name,” Ms. Lepore writes in “Doll Parts.”

At 16, Ms. Lepore met a man named Michael, who was a decade older, but still lived with his parents. After Michael discovered Amanda was really a boy, his father – who harbored a secret crush on his son’s girlfriend, paid for her sex change. At 17, Ms. Lepore had her gender reassignment surgery in Yonkers, New York. She married Michael a year later. Soon after, Ms. Lepore’s mother died suddenly of cancer. She saw her father and brother for the last time at the funeral. She decided to run away from her husband, who had become controlling and jealous, and move to New York to become a star.

When Ms. Lepore arrived in New York, she found a job as a dominatrix at an S&M club called The Key. “It was ridiculous,” she said. “It’s really acting. I became really good at it. So for David LaChapelle, I was able to model for him better because he’s so demanding and direct so I could get right into it. I think that’s why I was a really good model.” Her ability to act—often as a spaced-out floozy—made her the toast of the club kids, who then hosted debaucheries parties at places like Limelite. “Amanda can be a bit of a ditz, but a lot of times that’s just an act,” observed Michael Musto, who chronicled the nightlife scene for his Village Voice column at the time. “She can actually be quite cunning about manipulating people – or stage time – which is one of many Marilyn Monroe-like things about her. The woman isn’t stupid!”

Ever ambitious, Ms. Lepore is currently recording a second album with the gay rapper Cazwell, who wrote a few of the tracks, including a gangsta rap song. She still goes out clubbing three or four nights a week. It takes her two hours to do her hair and makeup (she is a pro at this point, having once worked at the makeup counter at Patricia Field) but the “prepping – shower and the moisturizer thing” takes just as long or longer. “I probably take longer than drag queens to get ready.” She travels constantly, flying all over the globe from Vienna to Sydney making public appearances. It helps that she doesn’t do drugs and rarely drinks, often sipping ginger ale from a champagne flute because it looks glamorous. “I’m sure if I had done a lot of drugs, I wouldn’t remember stuff. The doctor told me when I first did hormones that if you drink or do drugs the hormones aren’t going to work as much. That always stuck with me. I mean I tried everything, but I was never into it. I could never do coke. My nose would run. It didn’t make me feel good. I never liked being out of control.”

Ms. Lepore confessed that she just had eye surgery to makes her eyes bigger and more “doll-like.” In addition to a nose and boob job, a forehead lift, butt implants and having her lips inflated, Ms. Lepore had her bottom ribs broken in Mexico so she could achieve a smaller waist for a more hourglass figure. At 5ft 2inches, her measurements are 38-22-38. It’s been reported that the total cost of all her cosmetic surgeries is over a million dollars, but she doesn’t have an exact tally. “Fortunately everything was at it’s best when I had it done,” she claims. “I didn’t have to do silicone injections in the boobs and things like that. They had implants by then. In those ways I was lucky. And the sex change was really good. I didn’t have to fix everything.” Susanne Bartsch, the party hostess, recalls going through customs in Dubai with Ms. Lepore. “A group of female Muslim custom agents were gagging over her and wanted to know all about her boobs. They asked permission to touch her body. Amanda totally complied and was giving them beauty lessons. They were in awe, and all the while the men were looking on in envy. Amanda was so in her element.”

Having such an over-the-top, instantly recognizable look makes it near-impossible for Ms. Lepore to ever go unnoticed, even during the day when she treks to yoga class or runs errands in “ballet flats and high-wasted leggings” with no makeup on. Her notoriety and extreme beauty also make it hard to date. “I don’t have relationships for a very long time,” she sighed. “I’m famous so that gets in the way. They either really like the spotlight and having a trophy girlfriend or they will not really be crazy for it.” Lately she’s been using the dating app Tinder. “I got more choosey. I love Tinder because if you don’t like them, you can just un-match.” She tried OK Cupid too, but they deleted her account. “They would have problems with my profile pictures—maybe the cleavage.” Asked if she will ever marry again, she lets out a deep throaty guffaw. “It doesn’t look good. I work at night. It’s harder. Older guys fall asleep.” Recently she’s been face-timing with a 28-year-old Italian man whom she matched with on Tinder during a trip to Milan. They plan to meet for a first date in Rome.

“Doll Parts” also includes tip sheets on how to flirt with men, bleach your hair, do your nails and command a stage (“Visuals are just as important as talent. Generally, even more so.”) In many ways, Ms. Lepore is the exact opposite of Caitlyn Jenner. “I saw [Ms. Jenner’s] series and no one has makeup and they were wearing Birkenstocks. I was like: ‘this is really bad! Why aren’t they enjoying what’s fun about being a girl?’ I didn’t really understand the politics of it. It was weird for me.” She took an exaggeratedly dainty nibble off a gluten-free cookie while chatting. “After seeing the Caitlyn Jenner show, I think my book is an alternative where you can be hyper-feminine and enjoy not being so serious. I’m sure every girl doesn’t want to be a politician and activist and wear Birkenstocks.” She rolled her heavily made-up eyes. “I’m sure they want to have fun and wear high heels and saturate themselves with makeup and perfume and enjoy that part of being a girl.”  Ms. Lepore then stood up and admired herself lovingly in a full-length mirror. She stroked her Monroe style bob. “I like women who transform themselves. It’s what I do. My high is looking fabulous.” 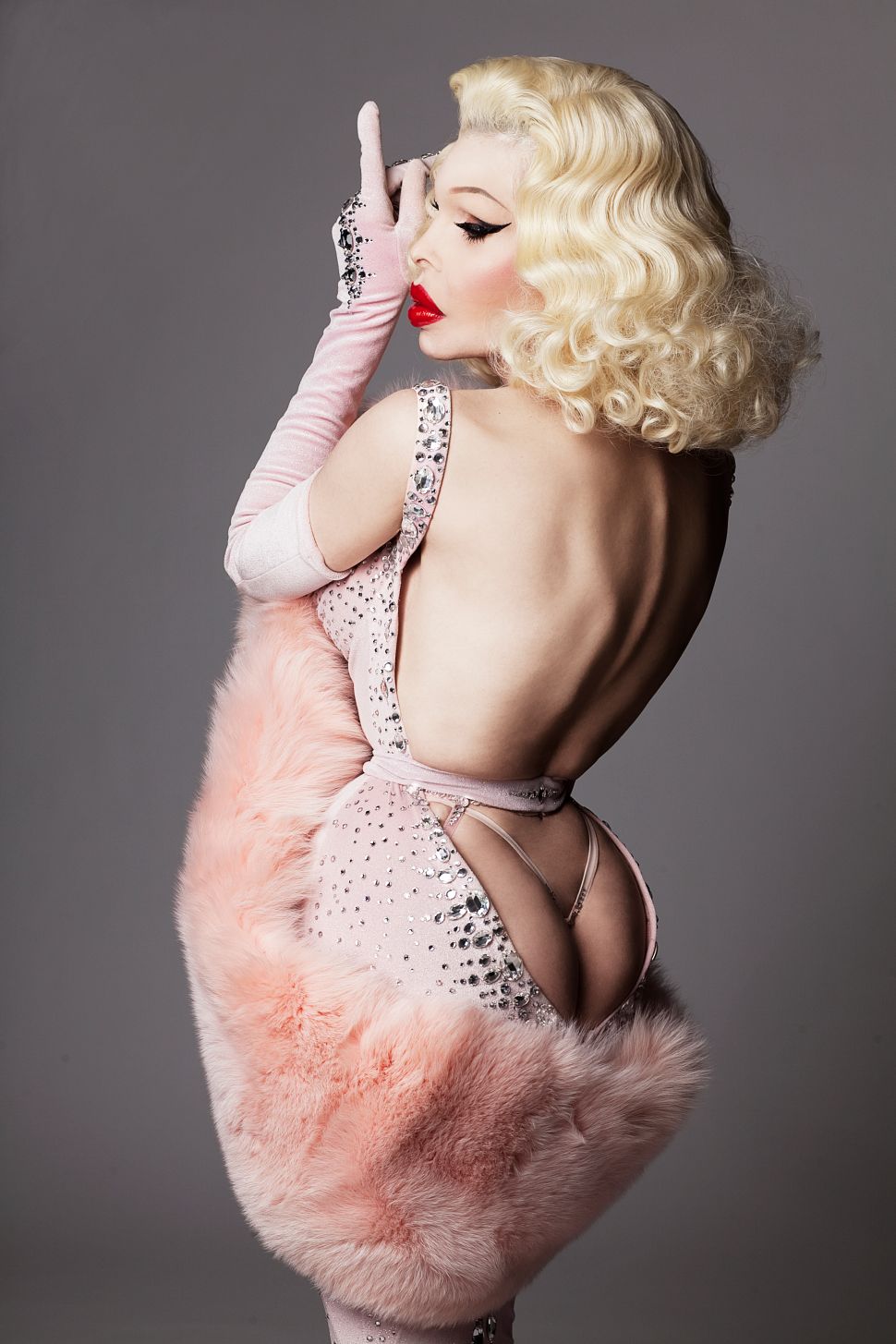