Step aside J-Rod and watch out Selena Gomez and The Weeknd; Amber Heard and Elon Musk are here. And the unlikely duo is a frontrunner for being the couple of the summer.

The tech billionaire and the actress were first spotted together at the Delano South Beach in Miami, back in July 2016. They have since been seen attending movie screenings and partying together, though they originally met in 2013 on the set of Machete Kills. Now is the first time they have publicly acknowledged their coupling.

To do so, Heard and the founder of Tesla and SpaceX took to Instagram to officially announce their relationship, by posting similar snaps, while canoodling and dining at Moo Moo Gold Coast in Australia. The kiss mark on Musk’s cheek, obviously from Heard, just served to solidify their dating status.

Heard, who recently divorced Johnny Depp, is currently in Australia to film for Aquaman. It seems Musk, who divorced Talulah Riley in 2015, is just there to keep his new girlfriend company. Earlier in the weekend the couple were photographed while ziplining at the Currumbin Wildlife Sanctuary, along with two of Musk’s six sons.

Their relationship has already sparked a number of questionable headlines, including one that asked: “Will Elon Musk and Amber Heard Die on Mars Together?” Hopefully the answer to that question is no, but if there was any celebrity couple most likely to take a vacation to Mars, it would probably be these two.

Now that Heard and Musk are officially the couple of the summer, perhaps a cute couple nickname will be bestowed upon them. Whether it’s Ember, Ambon or Am-El, it’s bound to be a good one. 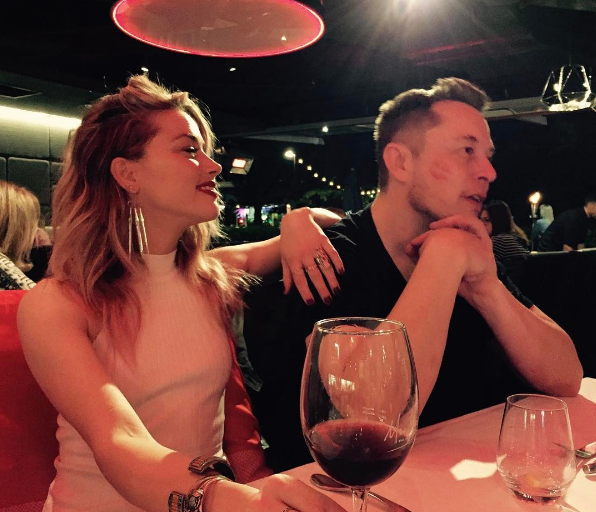