It was truly a week of shock and awe—followed by a day of gleeful “gotcha” by the media.

The world nodded appreciatively as video footage showed cruise missiles rising from the deck of an American warship; images of destroyed Syrian airplanes; and then stock footage of jets being catapulted from the deck of a U.S. Navy aircraft carrier. The message was clear: America was ready and able to defend allies and defeat foes.

Two weeks later, there were snickers when it turned out that the aircraft carrier, the U.S.S. Carl Vinson, was not off the Korean coast but 3,600 miles away. The ship and its strike group were conducting exercises with the Australian Navy and had canceled port visits.

But the media had a momentary orgasm suggesting a screw-up: Either President Trump didn’t know where the carrier was, or the Pentagon had failed to tell him. Sadly, as is all too often the case, the media missed the story. (The New York Times, in its cackle and glee, couldn’t even get right the number of ships accompanying the Vinson: It is three, not four.)

The missed story has two parts: First, even from a great distance American might can be projected from the deck of a carrier. And second, we don’t have enough aircraft carriers to achieve our national strategic goals.

Just hours after the mission against the Syrian air field from which sarin gas attacks were launched, the world saw video footage of streaks of flame and plumes of smoke from missiles blasting off from the decks of American warships. Less than a week later, in response to North Korean dictator Kin Jong-un’s threats to annihilate the West, the video shifted to jet aircraft roaring off the deck of the nuclear aircraft carrier.

American capability—coupled with resolve—has no better messenger than the United States Navy.

Two U.S. Navy guided missile destroyers—the U.S.S. Ross and the U.S.S. Porter—were in the eastern Mediterranean Sea. Just after 3 a.m., and some four hours after President Trump gave Central Command the order to proceed, the Navy fired 60 Tomahawk cruise missiles. Fifty-nine hit their targets; one misfired and fell, aborted into the Mediterranean. (That is already the subject of a rigorous Navy investigation.) A nice twist to the story—unreported except by the ultra-insider Naval Institute—is that the commanding officer of the Porter is a 41-year-old woman, Cdr. Andria Slough.

The missiles destroyed more than 20 Syrian jets—most in hardened shelters—petroleum and logistical storage, ammunition supply bunkers, air defense systems and radars. Claims that up to 16 people were killed during the strike remain unconfirmed. But Pentagon officials did confirm that “U.S. military planners took precautions to minimize risk to Russian or Syrian personnel located at the airfield.” Secretary of State Rex Tillerson made clear, however, that the U.S. “sought no approval from Moscow.”

The U.S.S. Carl Vinson, with its 75-planes and helicopter air wing, and its strike group have the ability to launch offensive missions and shoot down intercontinental ballistic missiles. Its presence comforts allies and sends a clear message to potential foes. It is now on its way to the Korean peninsula, having been patrolling off the Indonesian coast.

Having the ability to launch a long-range mission—with inflight refueling capabilities and without needing the permission of foreign governments for airbase access, flyover rights or staging facilities—underscores the importance of a strong, capable Navy.

Presidents often refer to aircraft carriers as 4.5 acres of sovereign American territory. According to President Bill Clinton, “When word of a crisis breaks out in Washington, it’s no accident that the first question that comes to everyone’s lips is, ‘Where’s the nearest carrier?’ ”

Unfortunately, that capability had been allowed to wither and rust under President Obama. The American fleet shrank to 273 ships, the smallest it has been since 1916. Obama’s inability—or unwillingness—to challenge budget sequestration also reduced training hours for pilots and limited critical maintenance.

Even the Vinson strike group—potentially sailing in harm’s way as it approaches the Korean peninsula—has a smaller-than-usual complement of ships. Only two guided missile destroyers and a cruiser are accompanying the carrier. Additional cruisers, destroyers, submarines, frigates, tankers and supply ships—all vital to the defense of the carrier—usually comprise a strike group. With so few ships in the fleet, “We are running them hard and putting them away wet,” said retired Navy Captain Dick Costello.

Congress has mandated that the Navy maintain 11 nuclear aircraft carriers. We currently have 10, and only four are deployed. The rest are undergoing maintenance, and several are unable to be deployed on short notice. The Navy’s newest carrier, the Gerald Ford, is about to undergo its final acceptance trials, and it won’t be operational till 2020.

President Trump has called for rebuilding the Navy—to 355 ships. That will not be easy to accomplish. There will be opposition from budget hawks on the right and from social activists with competing priorities on the left. Nor, once funding is secured, will the task be accomplished quickly. Building capital ships is difficult and takes time.

But building them is essential. Our security, our national interests, and the safe transit of merchant shipping around the globe depend on a capable, reasonably sized Navy. We have seen—yet again in the last few weeks—that the world is a dangerous, unpredictable and unforgiving place.

At last we now have a president who is willing to meet bellicose foreign challenges with renewed American resolve. So we must as John Paul Jones said in 1778, give the brave men and women who are willing to sail in harm’s way, the fast ships to do so. 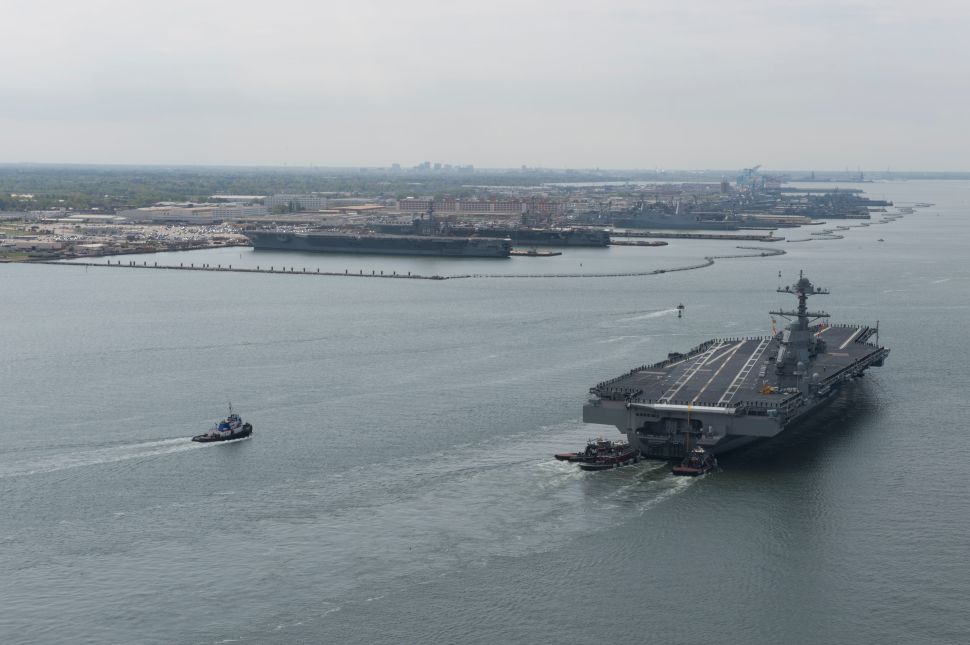