For the third time in as many months, the city of Berkeley has been in the news for violent clashes between members of the right and left.

Extreme leftist protesters, many wearing bandanas to conceal their faces and claiming to be part of a group called Antifa—for “anti-fascists”—showed up to a free speech rally put on by members of the right. While some at the event could be considered part of the “far-right,” many were just free speech advocates who say things the left doesn’t like.

The rally began earlier that morning, around 10 a.m., organized by some on the right in response to the past two instances of violence in Berkeley—which I’ll come back to in a minute.Lauren Southern, an activist and writer, attended the rally, as did members of the Proud Boys, a group founded by provocateur and radio host Gavin McInnes. These two and I may disagree on many things, but I haven’t seen either of them actually call for violence against others.

But in today’s hyper-sensitive, assume-ill-intent culture, words are equated to violence. And, once words are interpreted as violent, physical violence becomes an acceptable response.

Dinkelspiel, who has covered riots in Berkeley for years, said it appeared as though “the far left, the black clad demonstrators, initiated much of the violence.” At least one right-leaning attendee  of the rally, Kyle Chapman (known as Based Stickman), suggested others prepare for violence, advising viewers to bring protective gear and explaining how to create shields and use flag poles as weapons.

Another attendee, identified as Nathan Damigo, was captured on film punching a woman in the face. This video has already become Exhibit 1 in claiming the Right is violent—and to prove that what the Left says about Donald Trump supporters is true.

Make no mistake, disgusting behavior was displayed by both sides, but it so far appears, as Dinkelspiel noted, that the violence was started mostly by the leftists in attendance. The same goes for Berkeley’s other examples of violent clashes over free speech.

On February 1, 2017, free speech advocate and provocateur Milo Yiannopolous was scheduled to speak at the University of California-Berkeley campus. Many students wanted his talk to be cancelled, but university administrators refused. Students showed up to express their First Amendment right to protest. Initially, the protest was peaceful, but once Antifa showed up, Yiannopolous had to be evacuated and his appearance was cancelled.

The black-clad protesters hurled rocks and fireworks at the building where Yiannopolous was supposed to speak. Eyewitnesses suggested these were not students or professors. After setting fires on campus and attacking the building, the rioters then traveled downtown, breaking windows and looting a Starbucks.

On March 4, a free speech rally was scheduled in Berkeley as a response to the riots against Yiannoplous. Antifa again showed up and became violent. This prompted the “Patriot’s Day” rally on Saturday, organized by Rich Black. The rally was held in a public park, where police officers stood back and confiscated weapons before the violence started. Once it did start, however, the police largely stayed out of the fray. They arrested more than 20 demonstrators (some from each side). At least 11 people reported injuries.

Black himself called for supporters not to bring weapons, but once the violence started, those on each side used anything they could find (rocks, sticks, Pepsi cans, even a trash can) as weapons.

Something is wrong in Berkeley, and it’s making peaceful protesters (and the nearly 117,000 people who live in the city) look bad, as they’re forced to watch their town covered in the press due to the riots. Once the beacon of free speech back in the 1960s, Berkeley is now full of free speech advocates battling it out with those wanting to censorship.

The irony of the censorship crowd, as I and others pointed out after the Yiannopolous fiasco, is that the violence gets media coverage that the rally itself wouldn’t have received. The violent actions make Antifa look bad (though perhaps they don’t care). Prior to this weekend, their actions made martyrs of the speakers whose events were being attacked.

Trump supporters face off with protesters at a ‘Patriots Day’ free speech rally on April 15, 2017 in Berkeley, California. More than a dozen people were arrested after fistfights broke out at a park where supporters and opponents of President Trump had gathered.

This weekend also made the rally attendees seem violent when previously their propensity for violence was only suggested by the Left. At the same time, suggesting the attendees simply allow themselves to be attacked doesn’t see like an appropriate response, either.

The violence simply has to stop, but it doesn’t look like it will any time soon. The broader fear here is that riots like this will continue and spread across the country, as those opposed to Trump or right-leaning ideas (extreme or not) increasingly blur the lines between hateful, inciting speech and free speech.

This can already be seen in the response to author Charles Murray, who several decades ago wrote in a book that there may be genetic differences between the races relating to intelligence. Murray was scheduled to talk to Middlebury College in Vermont about his more recent book, published in 2012, which discusses the white working class (a demographic that was ignored, and helped usher in Trump as president as a result). Still, this discussion was shouted down, even though a liberal professor was brought in to ask Murray tough questions. She ended up being injured by protesters.

Murray is well known in conservative circles, but he hardly rises to the level of liberal campus infamy as Yiannopolous or Southern. The left simply deems all speech that doesn’t conform to its worldviews as “bigoted” or “violent,” and insists on censorship.

What’s happening in Berkeley is unlikely to remain confined to Berkeley, and any right-leaning speaker is likely to become a reason for riots. If one wants to see where the breakdown of political discourse is coming from, they can’t blame it all on Trump. 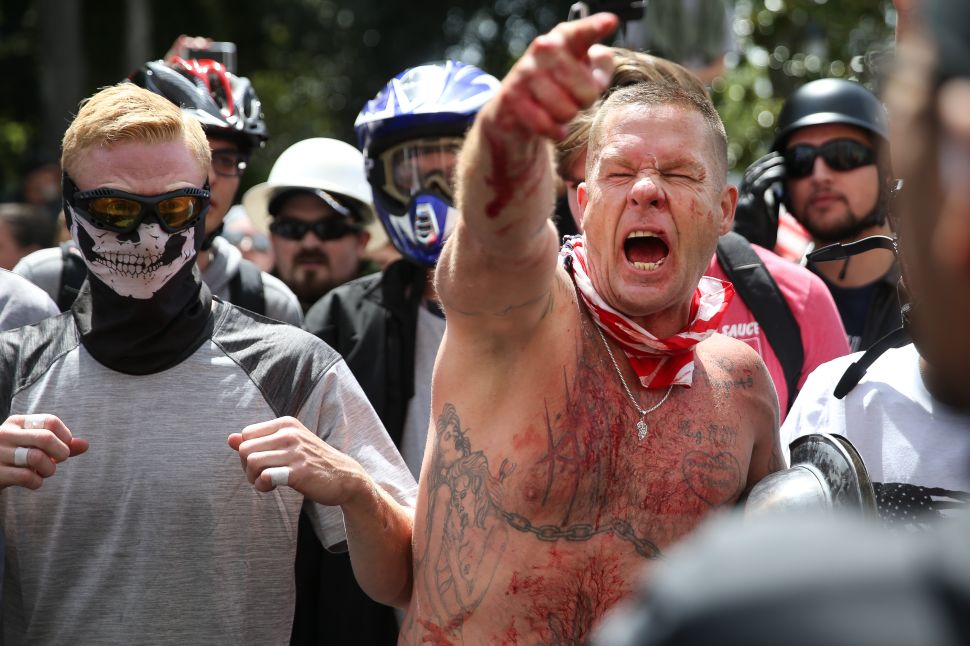