The moment it dawned on me that the Bernie Sanders movement had metastasized into full-blown cult status was the rally where God gave Hillary Clinton the bird.

Remember that one, folks? Saint Bernard—who at that moment, of course, was being martyred by the dastardly Democratic National Committee—was speaking at one of his many rallies one day when a little bird landed on his podium and looked him straight in the eye.

Immediately, #BernieWorld erupted in a collective out-of-body experience. From the social media reaction, and from the signs and bumper stickers that replaced “Bernie” with “Birdie,” it was as if God Herself had sent the bird as an unmistakable sign that Bernie was Her Chosen One. It was an interesting reaction, given that so many people on the left take so much pride in their secularism—but there it was.

And yet, despite the Goddess’s clear, unmistakable sign, the wayward, willful DNC and its acolytes were unmoved. The narrative is clear: their hardened, corrupt hearts of stone could not be melted, and they helped that evil villain Cruella deHill win the nomination—clearly by cheating, of course, because how else could her victory over The Man of The People be explained?

Well, the #FeelTheBern crowd has never gotten over its hero’s defeat and, considering its continued lashing out at Clinton and anyone who supported her, probably never will. The continued, beating-a-dead-horse attacks on Hillary—more than five months after her defeat—are Exhibit A. The ongoing pounding of the DNC is Exhibit B. The die-hards in this movement have long memories and a propensity for vengeance and spite that might make even the most hard-bitten Trump backers tip their “Make America Great Again” caps in grudging respect. They don’t just want to take over the party (even as their hero repeatedly criticizes it, yet still declines to join it); they want to cast out anyone they view as a heretic—that is to say, anybody who supported Hillary and won’t admit they were stupid and/or evil and beg for forgiveness. (As in any other cult, those who won’t recant must be cast out; deviation from orthodoxy will not be tolerated in this movement that pats itself on the back for its open-mindedness and tolerance.)

This would all be irritating but irrelevant if the Democratic Party had not been bending over backward to embrace Bernie and bring him into the fold. But the party is doing just that, as new DNC chair Tom Perez trots out Bernie across the country, which hasn’t stopped Bernie (or his followers) from persistently spitting in the party’s face and dismissing the concerns of the party’s most loyal voters as inconsequential.

The resentment of longtime, loyal Democrats toward Sanders, and Perez’s embrace of him, is boiling over on social media. In sports parlance, Bernie Sanders would be known as a “clubhouse cancer”—a talented but troublesome player whose bad behavior and poor relationships with teammates create disruptions vastly surpassing whatever positive contributions he might make on the field.

Many of Sanders’ supporters also fall into this category. The Bernie crowd and the Trump crowd are a lot more similar than one might realize. They want different things in matters of policy, but their attitudes and inclinations are amazingly similar.

Take, for example, the reaction of both the Berners and the Trumpkins to the aforementioned Hillary Clinton. On some days, it was hard to tell which side vilified her more. Is there really much difference between “Trump That Bitch” and “Bern The Witch”?

Another similar note is the stark, simplistic, black-and-white thinking that characterizes both camps. If we just address the “economic uncertainty” of the (white) working class, then all these other nettlesome problems will magically go away. (And make no mistake: a significant segment of Berners treat the racial divide as a secondary or derivative issue, which is why voters of color aren’t buying what he and his followers have been selling.)

There’s also a shared sense of grievance, which might be understandable from some of the economically maladjusted supporters of either demagogue, but is puzzling coming from Bernie’s college-educated, upwardly mobile young followers, many of whom have never faced a bigger disappointment in life than their hero’s defeat.

And then there’s the failure to employ basic logic. We know about the economically struggling Trump followers who voted for a candidate who pledged to take away their health insurance. But this kind of bad logic can be found on either side of the Donald/Bernie divide. We hear all the time from Bernie backers that Hillary was the worst candidate ever, but #BernieWouldHaveWon. Let’s think about this for three seconds, shall we? If Hillary was a horrible candidate, but she still managed to pound Bernie by about four million votes, doesn’t that give us some indication that perhaps he wasn’t the next Barack Obama, either? It’s not rocket science.

Above all, what the die-hard Trumpkins and Berners share is the idea that the only way to fix all our problems is just to burn it all down and start over. This is why so many Trump backers responded to his empty promise to “drain the swamp,” which he promptly refilled with a fresh batch of Goldman Sachs alumni. In the case of Sanders supporters, the corrupt, evil force that must be torn down and rebuilt is the Democratic Party. Their zeal to purify the left is reminiscent of the infamous Vietnam-era statement that it was necessary to destroy the village in order to save it.

But in this respect, the Berners are clearly bad at arithmetic. Despite their continued insistence that the majority of Americans are progressives, polling continues to show that liberal self-identification accounts for a quarter or less of the public, with conservative self-identification still well ahead, and liberals trailing moderates as well. Progressives simply cannot cast moderates out of the Democratic Party and expect to win. There aren’t enough progressives to win elections on their own. Put down the Kool-Aid and review the numbers. Facts can be your friends, even if you don’t like them very much.

In any functioning democracy, governing requires a coalition, whether you have a two-party state or a multiparty state. Republicans are learning this fact now, as the fact that they have both the White House and majorities in Congress still has not delivered them an unbroken string of legislative victories. The Democratic Party, like the Republican Party, is a diverse coalition in which compromise is necessary to function. If the Berners have their way, and Hillary supporters are purged from the Democratic Party, the next Democratic National Convention could be held at one of those Bernie rallies.

Hey, maybe the Goddess will send the Birdie again. 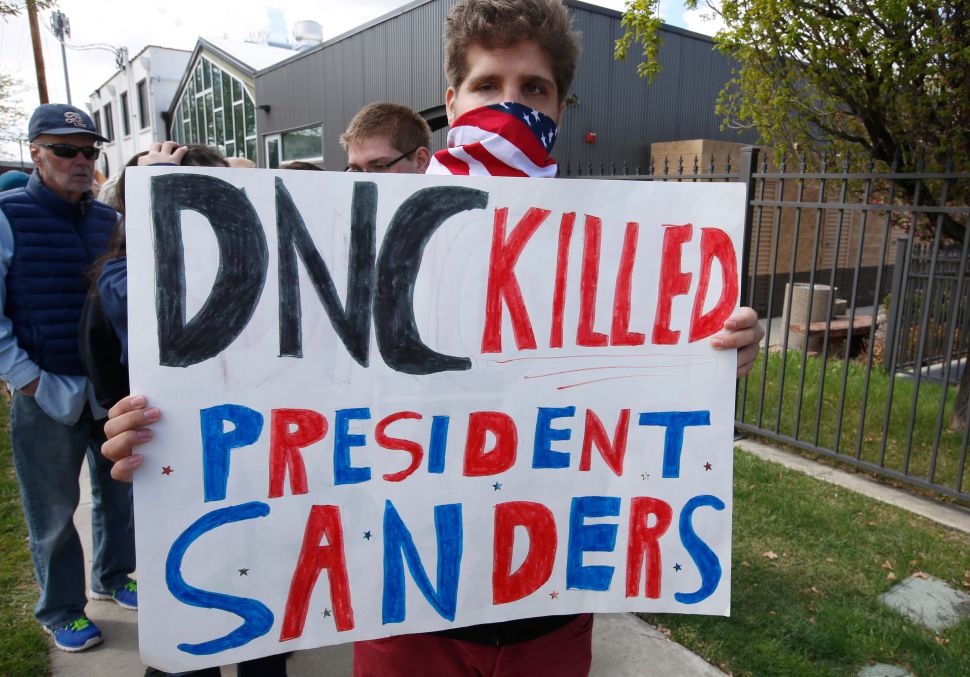