The best shot in this week’s episode of Better Call Saul—and as always, the competition is pretty goddamn stiff—comes close to the end. World-weary ex-cop Mike Ehrmantraut has, over the better part of an hour of television, slowly tracked his way toward the people who’ve been tracking him, and who prevented him from assassinating local drug kingpin Hector Salamanca last season. Or so he thinks. The tracking signal has stopped on a stretch of highway surrounded by nothing for as far as the eye can see. Mike creeps his car up a hill and parks just behind the crest, so that only the roof is visible. We hear his car door open. Then, like a vampire rising up from the surface of the earth itself, his bald head and unsmiling face and sloping black-clad shoulders emerge from the thin strip of illusory nothingness created by the curve of the road and the heat coming off it. He’s really just stepping up and out of the car, but it looks like he’s materializing from another dimension, where dark things dwell. Given where that road leads him—to the discarded tracking device, deliberately planted in the middle of the road with a ringing cellphone attached to it so he can hear his soon-to-be master’s voice, he might as well have.

“Witness” is the episode Better Call Saul viewers have long been waiting for, the one in which Gustavo “Gus” Fring finally makes his debut. Gus was—or is that will be?—the primary antagonist of Breaking Bad, the series to which BCS serves as a sequel. Watching Mike Ehrmantraut and his occasional partner of convenience Jimmy McGill work their way through their relatively petty crimes toward this apex predator’s stalking ground over the course of the past two seasons has been like hearing the longest, most morbid version of “The Aristocrats” ever told.

There was every risk that the introduction of such a massive figure, a mainstay in any list of the greatest villains the medium has ever produced, would throw this relatively quiet show’s careful balance of black comedy and quiet menace out of whack. But as it happens, we needn’t have worried at all. Gus doesn’t make the kind of grand entrance that would overwhelm the show’s dual-narrative structure, in which Jimmy’s love-hate relationship with his more successful but mentally ill brother Chuck slowly drags him into criminality on one half of the ledger while Mike’s natural talent for skullduggery and bloodletting push him deeper into the underworld on the other. Smartly, the show reunites the two characters for Gus’s introduction, sending Jimmy into his restaurant for a failed reconnaissance mission at Mike’s behest. By the time we realize who he is, the Chicken Man has been milling around in the background of the shot for several seconds, sweeping up like the conscientious manager of a fast-food place he pretends to be. As Jimmy sits and looks around for a sign of the man behind Mike’s pursuers, that very man slowly, slowly, slowly draws near to him, almost brushes up against him, and passes him by. His face is always either out of focus or out of frame entirely. The effect is like you’ve gone swimming in deep , and you’re watching a friend float around obliviously as the silver-gray shape of a shark swims right past him.

That the scene manages to be that white-knuckle tense despite our certain foreknowledge that no one involved is going to die speaks to the menace of Gus Fring as established in Breaking Bad, BCS’s forerunner. Indeed, our first real sign that this episode is The Big One comes not in the form of Gus himself—who eventually pops up to help Jimmy, whom he’s obviously made as a spy, look for his “lost watch” in the restaurant’s trash bin—is a literal sign. When Mike first tracks the men spying on him back to Gus’s headquarters, the show slowly pans up to reveal the parking-lot marquee for Los Pollos Hermanos, Fring’s legitimate fast-food front business, like The Texas Chain Saw Massacre revealing a sculpture made of human bones. Perhaps it’s a cheat to coast on the fuel provided by the previous show, but I ultimately don’t think so. The yellow lighting that coats so many of Mike’s scenes, the almost confrontational quiet and slowness with which the scenes of his spycraft pass—these are qualities all BCS’s own. The show has more than earned the presence of its new cast member.

It does so, in fact, in this very episode, which ends with a totally unrelated scene that proves the series’ mettle. Throughout the episode, writer Thomas Schnauz and director/co-creator Vince Gilligan have alternated Mike’s attempt to discover Gus’s identity with your usual Jimmy shenanigans—his inability to respect his business partner and girlfriend Kim’s professional boundaries, his genuine skill and charm with his elderly clients, and so on. But it’s also leveled up his brother Chuck, who now peers through windows like a man besieged while a hired security goon plays solitaire on his torchlit table. By the time his incredibly white-collar partner Howard Hamlin starts hopping over fences and walls to come visit him, we’re really left wondering what’s going on.

We don’t have to wonder for long. Chuck knows that the tape he made of Jimmy’s confession to tampering with his case files is useless in court. He also knows that by leaking the existence of the tape to their mutual friend Ernesto, word will get back to Jimmy. Finally, he knows that Jimmy will come calling to steal the tape and destroy it. The only thing he doesn’t count on is that Jimmy will be so hurt and so angered about being tape recorded by his own brother that he’ll bash down the door in broad daylight, break his way into Chuck’s desk with a poker from the fireplace, and crush the tape with his bare hands, screaming with pain and rage the whole time. “You taped me, you asshole!” he shouts as the handheld camera shakes and rattles while attempting to keep up. “You pulled that heartstrings conjob on me, you piece of shit!” He brings up Chuck’s departed wife: “No wonder Rebecca left you! What took her so long?” His voice shrill to the point of hysteria (this is Bob Odenkirk’s best work in the role yet), he shrieks in Chuck’s face, “For this you destroyed our family? Are you happy now? For what? For nothing!” Then in come Howard and the security guy, and Chuck asks them if they witnessed the crime Jimmy just committed, and they affirm that they have. Chuck stares at his brother with a look of unbearable disappointment on his face, and Jimmy stares back, stunned and undone. Gus is great, for sure. But so is Better Call Saul, with or without him. 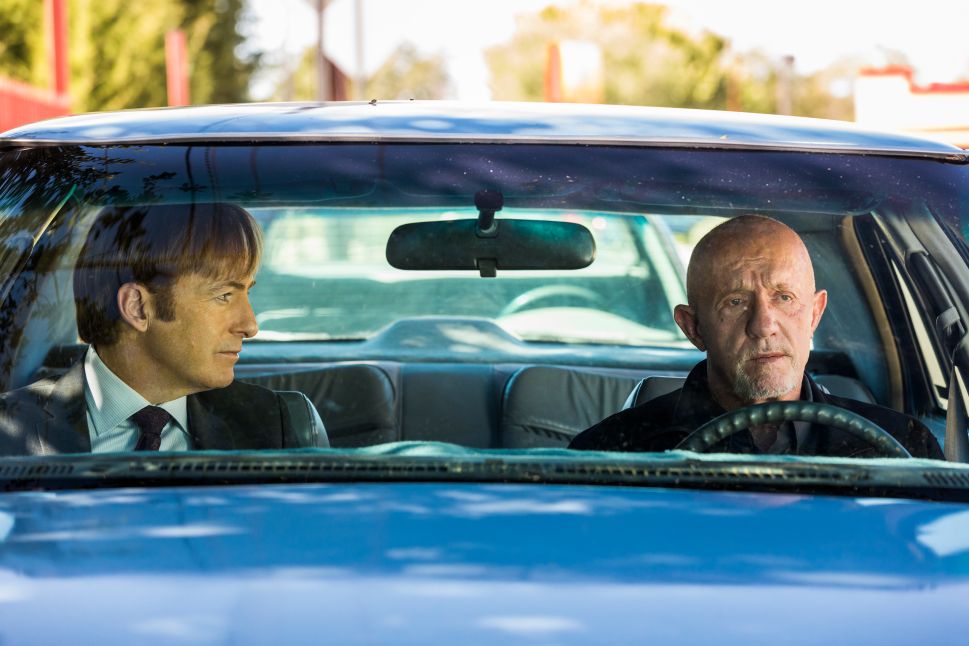