Better Call Saul has truly gone Bad. “Sunk Costs,” this week’s episode, witnesses the return of many of Breaking Bad’s visual signatures. The hazy yellow desert coloring. The vistas of flat lands and big sky. The low-angle shots of dangerous men with the cloud-strewn blue above them. The episode-opening close-ups of various damaged objects—most notably shoes dangling from a wire until, worn down by the elements, they drop to the ground near a bullethole-ridden Spanish-language stop sign—the significance of which will not be made clear until the end of the hour (if then). Mike’s tense conversation with Gus in the middle of the empty highway, with future Head Goons in Charge Victor and Tyrus standing by, is straight out of the Walter White saga, with actors Giancarlo Esposito and Jonathan Banks exchanging terse just-so statements and queries in their own very different no-nonsense ways. BB’s style was, and is, so distinctive that its successors can switch it on at will, like a regional accent if not a whole second language.

This is still Better Call Saul, though, and even the BB-esque Mike half of the episode maintains the current series’ unique rhythms. By now the laconic pacing of Ehrmantraut’s tradecraft is the most talked-about aspect of the show, and likely the most frequently mocked as well: because I’m a good-natured sort I enjoyed Chapo Trap House podcaster Matt Christman’s joke that on next week’s episode, “Mike spends 40 real-time minutes putting a ship in a bottle.” Indeed, the show keeps the camera trained on him as he tosses a pair of sneakers into the air to catch on a power line a grand total of three times until they catch on the final throw. It’s just daring you to groan with impatience.

But watching a stone-cold operator like Mike methodically make his way through the world—in this case helping Gus sabotage their mutual enemy Hector Salamanca’s drug trafficking route by sprinkling contraband onto one of his trucks via a sniper bullet through the aforementioned drug-packed shoes—forces you to sit with sangfroid, effort, and ingenuity involved in carrying out violent, venal acts. It’s also an excuse to soak into the southwestern landscapes, the local homes and businesses, and the face of actor Jonathan Banks. It’s an experiential and ethical pacing choice, if there’s such a thing. Complaining that it’s not a pulse-pounding thrill ride is like watching Tarkovsky’s Stalker and yelling “Get on with it!”

A lot more happens on Jimmy’s side of the ledger this week, beginning with one of those moments of emotional cruelty the show casually tosses in once in a while to keep us aware of the moral stakes. The first time we see Jimmy in the episode, he’s on the phone with his new receptionist, canceling his appointments as he prepares to be arrested for breaking into his brother Chuck’s house. Chuck comes out to the curb where Jimmy sits smoking and begins to lecture him about how this is all for his own good, how he’ll come out the other side of being charged with these crimes to make him a better man, to show him “you have to make a change before it’s too late—before you destroy yourself, or someone else.”

Michael McKean is a marvel in this role not just  because he makes it impossible to tell at any given moment what Chuck really means when he says things, but he makes it feel like Chuck himself couldn’t tell you either. Is his concern a bullshit cover story cloak for revenge? If it is bullshit, could he be selling it to himself as much as to Jimmy, in order to mask the terrible thing he knows he’s done to the guy? Does the fact that he’s right—that Jimmy will eventually help destroy a lot of people, including himself—make Chuck’s smarm more or less intolerable? Was that smarm, and all the meddling and scheming that’s gone with it, precisely the thing that set Jimmy on the road to ruin in the first place? Whether he’s talking to Jimmy himself, or alternately defending his brother’s core character while plotting to have him disbarred during a conversation with the prosecutor later in the episode, these questions are fascinating to bat around and unravel in your brain, like a cat with a ball of yarn.

But Jimmy himself has no patience for it whatsoever. His days of trying to understand, care for, or even care about his big brother are over. “Here’s how it’s gonna go,” he deadpans back at Chuck in mocking imitation of the man’s own just-the-facts monologue. He then rattles off a disturbingly plausible narrative in which Chuck will once again get so sick from his psychosomatic sensitivity to electromagnetism that he’ll have to be brought back to the hospital—only this time, the stress of being around all those lights and machines will be too much. “And you will die there alone,” he concludes, the passionless meanness of the declaration shocking even Chuck. Then the cops pull up and Jimmy jokes “Here’s my ride!” and that’s that. It’s a psychological jaw.

Much of what follows is, to be honest, a bit of wheel-spinning. We watch Jimmy get booked, searched, locked up, and arraigned; he talks to an acquaintance with the prosecutors, he refuses to let Kim represent him, he shamefacedly makes excuses both to the surprisingly kind judge and to Kim herself. Whether on other cop/legal shows on the procedural end or on BCS itself in the character-to-character department, we’ve seen all this stuff before. The lively, zoom-laden musical montage that accompanies Kim getting cleaned up and dressed for work the morning she finds out about the arrest takes such an unusual approach—who does zooms on TV drama anymore, besides The Young Pope?—is time better spent.

But I suppose we need it all to get to the gorgeous final scene, which is so ostentatious in its beauty that it really does feel like something The Young Pope would have done. Heck, between the conversational rhythms, the sharing of confidences, the smoking of cigarettes, and the use of close-ups, if you put Jimmy and Kim in a pope’s gown and a nun’s habit respectively they could pass for Lenny Belardo and Sister Mary in a pinch. But the main attraction here is the U-shaped wall of glass bricks outside their office, and the rich amber light (remember, yellow means caution on this show) that alternately illuminates their faces and casts their bodies into silhouette as Kim convinces Jimmy to let her take his case. The end the episode making a pact to shove the whole affair “right up Chuck’s ass.” What was it Chuck had said? “Before you destroy yourself, or someone else.” 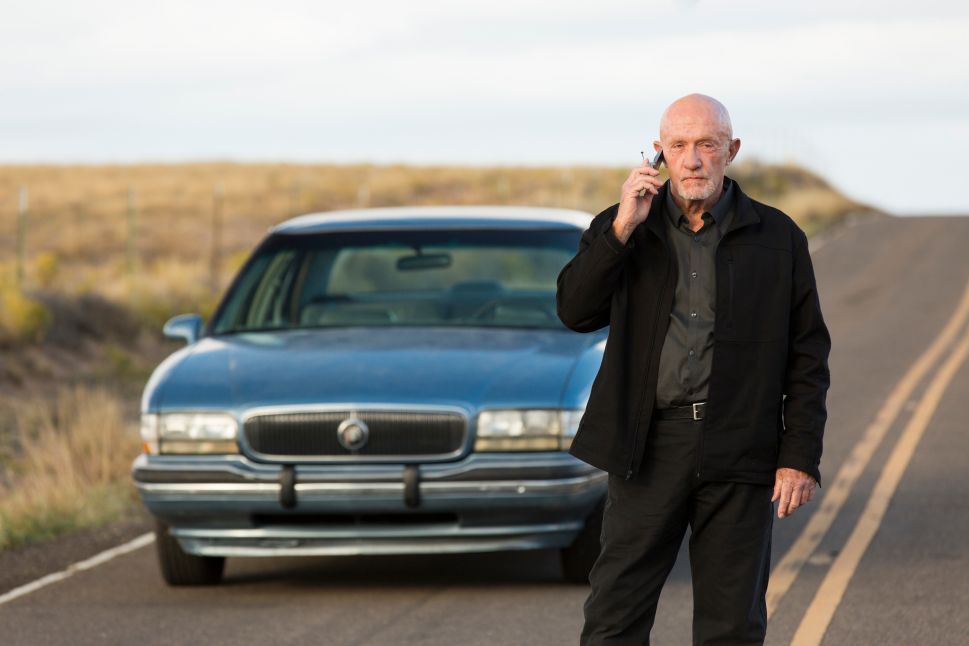