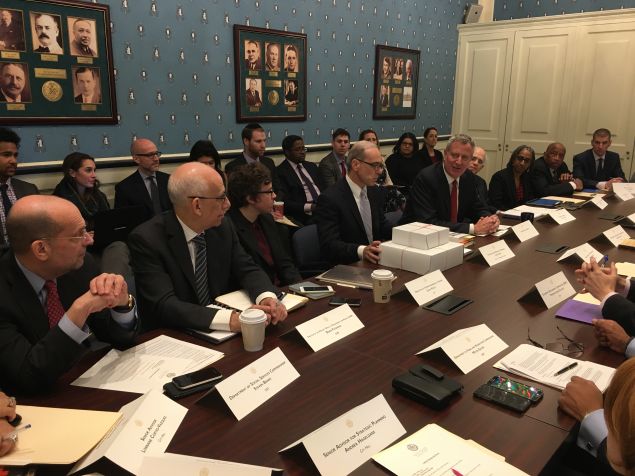 Mayor Bill de Blasio kicked off his “City Hall in Your Borough” week on Staten Island in an effort to “better” serve constituents in the GOP-leaning borough—the only one he lost in the 2013 election.

The liberal Democratic mayor said he would use the week-long visit, which kicked off today and concludes Thursday, to meet with residents and members of the administration working at Staten Island Borough Hall. De Blasio will also hold a town hall, visit a house of worship and participate in various events across the island.

The mayor said that the “City Hall in Your Borough” series—which will see him take similar tours through Brooklyn, Queens and the Bronx—grants a chance for him and his administration to speak with community leaders and residents who might otherwise go unheard.

“It’s also a chance to hear concerns and learn better how we can serve and this kind of focused energy for a whole week on one borough, I think, makes a real difference in terms of all these leaders of our government,” de Blasio said at a presser at Staten Island Borough Hall. “We have key members of the government here from all different wings of City Hall and key agencies. It’s a chance for them to focus their energies for a week on this borough.”

Staten Island Borough President James Oddo—a Republican who enjoys a warm relationship with de Blasio—said that he is sometimes “frustrated by lower levels of the agencies” under the mayor’s control when he has sought assistance for his constituents. But he asserted that he had not allowed the mayor’s unpopularity among Staten Islanders to influence their relationship.

“When I’m frustrated, I wanna make it clear but please don’t take that as a sign of anything other than I just wanna improve my home community and it’s not a shock—and I don’t think the mayor minds me saying this in front of the media—the mayor’s numbers on Staten Island aren’t great,” Oddo said. “I think the mayor himself has always appreciated the last three-plus years that I have not kind of gone with the flow and taken cheap shots.”

Oddo presented the mayor with a portrait of the two of them from 2002, when they both served on the City Council. The borough president also brought cannoli.

De Blasio said that they “gained mutual respect” when they both served on the City Council and he said that he has found over the past 15 years that “when he says something, I find it to be important to pay attention to it.” The mayor added that Oddo has “creative ideas and demands that government serve people.”

“So that’s why he will call me, he will text me and it will lead to those late night emails because I have found that he has a great knack for identifying something that we have to work on or we have to be better at and I think this week will be another opportunity to do that,” he said.

Still, protesters standing across the street from Staten Island Borough Hall held posters with the slogan, “Please Save Skylight Center,” referring to the Staten Island-based not-for-profit psychosocial rehab program for people who have a mental illness.

De Blasio, who rode the Staten Island Ferry this morning, is scheduled to make an announcement about neighborhood policing and neighborhood coordination officers at 12 pm. He will also join a road repaving crew on an overnight shift repaving streets on Staten Island at 10 pm. 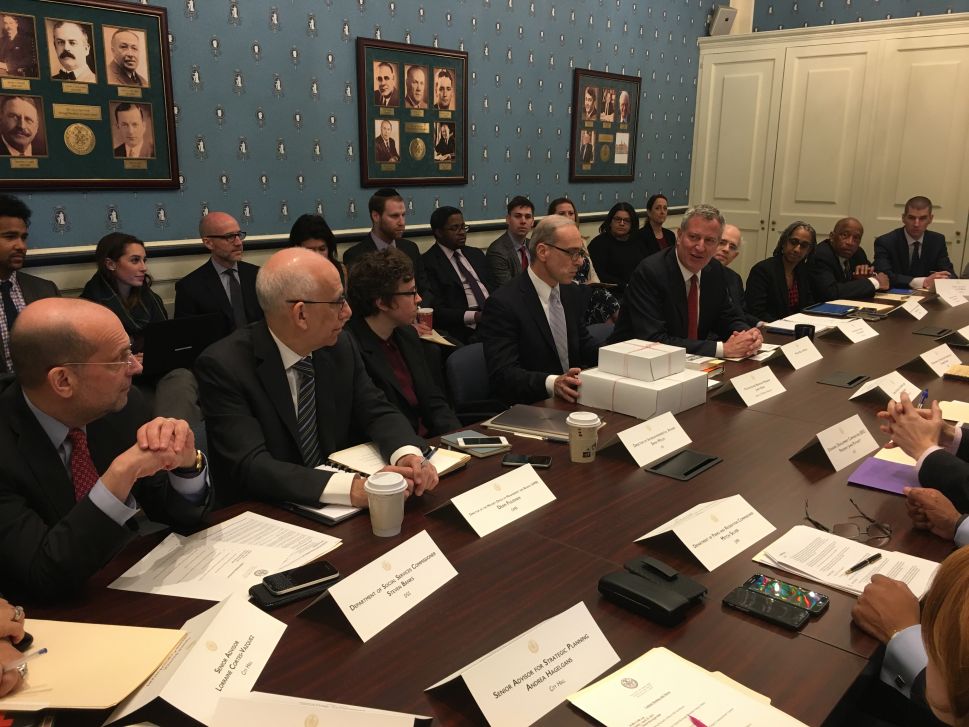