I spent the bulk of tonight’s Billions believing I’d gotten it all wrong.

A couple of weeks ago, you see, Chuck Rhoades learned that his nemesis, Bobby Axelrod, had snapped up every single copy of the first-edition Winston Churchill books that Chuck had been forced to sell to stay afloat following his separation from wife Wendy. After briefly blowing up, he almost immediately grabbed the prospectus for Ice Juice, the drink company his pal Ira was preparing to launch, and rang up his old man to encourage him to back the project financially. Despite earlier misgivings, Chuck Jr. stuck by his advice even when it became clear his dad would have to tap into his money, via the blind trust Chuck Sr. controls while Junior’s a public servant, to make it happen. “If that’s what it takes,” he says—before pausing and uhhhing and only then adding “to help you and Ira.” The pause is everything. The pause says the person he really wants to help is himself, by hurting Axelrod, even if it hurts two of the people closest to him in the process.

Most of “Golden Frog Time,” tonight’s exceptional episode, is predicated on the idea that no, that’s not what he was up to, that his interest in Ice Juice was totally sincere. And by god, it managed to convince me—despite two weeks of believing the opposite. I mean, Chuck tells Wendy he’s only felt the kind of clarity he felt about Ice Juice’s IPO twice before in his life: the first time he tried a case, and the first time he met Wendy. He tells her this in the bedroom they’re secretly sharing as they patch their marriage back up, for crying out loud. Later on, he risks tearing that rapprochement to shreds by blowing up at her when, having learned that Bobby’s out to destroy Ice Juice to punish Chuck and his dad, she advises him to pull his money from the stock. He has financial software specially installed in the morning when the stock’s looking up, and removed when it’s looking so down it’s depressing to watch. Maybe he’s a little weird when he encourages Ira and his dad to stay the course when word starts getting out that the juice is making people sick, but hey, he was weird when he made the investment two weeks ago to begin with. Would he have done all this stuff—especially lying to Wendy and then yelling at her when she warns him to bail—as a ruse? Maybe Bobby’s great Churchill swindle inspired him not to strike back directly, but to beat him at his own game by backing a killer stock play. Maybe he really thought Ice Juice was a winner. Maybe his devastation when he learns that it got wiped out, and that all the money from his blind trust got wiped out with it, is legit. Maybe that’s why he gets back to his room at the Yale Club (no conjugal visit with Wendy tonight, that’s for sure) and sits with his back to the camera and…

In a dazzling display of plot-mechanic pyrotechnics, the final minutes of the episode reveal that everything you thought you knew was wrong was actually right all along. Deftly playing with the “TWO WEEKS AGO / TWO DAYS AGO / EARLIER TODAY / NOW” time-jumping that the show’s done on and off all season, co-creators and co-writers David Levien and Brian Koppelman peel back the various schemes and double-crosses like an onion—only to reapply the shit they peeled back and then peel it back again to reveal what’s really going on. In short, this is Billions at its best.

We were right, of course, to believe Bobby and Wags would see the red flag Chuck Jr. was waving in their faces and go charging right for it. The nature of the charge was surprising, however, since this was no mere matter of playing the stock short or messing with the suppliers or distributors or what have you. No—using their chief dirty-deed doer Hall and a small army of proxies and catspaws, ranging from ex-employees getting back in Bobby’s good graces to Lara’s Irish gangster pals from the neighborhood, they fucking poisoned the juice, using patsies to make themselves sick and bribing a factory employee to spread trace amounts of the bacteria in the bottling center itself. This is above and beyond the usual white-collar shit Axe is used to. Shaken by the Sandicot casino debacle (Chuck’s doing) and his wobblier than usual marriage, he got back in the saddle with good old-fashioned sabotage.

Which Chuck was counting on! In our third set of “TWO WEEKS AGO” title card arrays, we discover that Chuck was behind the tip about Ice Juice that Bobby received from incarcerated i-bank titan Lawrence Boyd. We learn that Chuck had the Attorney General hire his one-time pursuer Oliver Dake to take over the Eastern District, just so he’d be able to sick a relentless (and righteous) attack dog on Axe at the first opportunity. We learn that Dake’s FBI operatives have been surveilling everyone involved in the entire poisoning scheme. In the annals of human history it’s hard to think of someone who’s been caught with redder hands than Bobby Axelrod’s about to be. No wonder Chuck’s laughing!

And all it cost him was his best friend’s dreams, and his father’s faith, and all of his money, and possibly his marriage. But hey, you can’t make an omelet, yadda yadda yadda.

Before long you find yourself thinking with the same manic blend of seven-dimensional chess and pure paranoia that must be how both Bobby and Chuck see the world. Like, Chuck couldn’t possibly have meant for his dad to empty out his blind trust to buy more of the stock, right? Unless that’s exactly what he meant to happen, since who could suspect him of engineering the whole thing if it dealt him so grievous a blow in the process? It’s the perfect cover-up! But wait—isn’t dipping in to the blind trust illegal? So wouldn’t that information have to stay secret one way or the other? And since Bobby and Wags figured out that Chuck Jr. helped bankroll Chuck Sr.’s investment, does that knowledge give them additional leverage? Or are they just so screwed by the FBI’s surveillance that it doesn’t matter? Or is Chuck screwed by it, since it was directed by Oliver Dake, who’s too straight-and-narrow a character to overlook Chuck’s misdeeds just because he owes the man his new job? And what about Wendy’s big bet against the stock after her and Chuck’s big fight—who will that come back to bite?

It’s worth pointing out that there’s a b-plot going on amid all this, and that, miraculously, it only adds to the intensity of the main event. As the new head analyst, it’s up to Taylor to fire a low-performing employee, and they’re uncomfortable with the responsibility—not with the morality of it, necessarily, despite a bad family history with unemployment, but with the mechanics of figuring out who to fire and how to fire them. This adds that electric after-lunch atmosphere anyone who’s worked in an office on a layoff day is familiar with: the relieved faces of people who’ve dodged a bullet, the flopsweat on the brows of those who don’t know if they have or haven’t yet, the camaraderie of workers wondering after the fate of their fellows (there’s a gorgeously silly bit where everyone chants “Rudy! Rudy! Rudy! Rudy!” for a lovable loser who managed to keep his job). It makes a full fledged villain out of Taylor, whose fine features and streamlined haircut (courtesy of actor Asia Kate Dillon, remarkable as always) are so naturally villainous, like someone out of the Empire’s officer corps, though their endearingly awkward demeanor has obscured the fact until now. By the time they’re accepting bags of cash in the parking lot from Dollar Bill Stearn in a game-recognize-game moment, it’s like they’ve been doing so all their life.

In the end, Bryan Connerty’s seemingly genuine concern for Taylor’s soul goes unheeded. “What I do believe in are actions, purpose, purity of vocation, and the challenges that come along with those things—the things that make me feel alive,” Taylor says. “Axe Capital gives me all of that and more. So you worry about my soul, and I’ll just keep doing my job.” Behold: a shark is born. But as Chuck’s actions in this episode prove once and for all, there are even more dangerous predators in the sea. 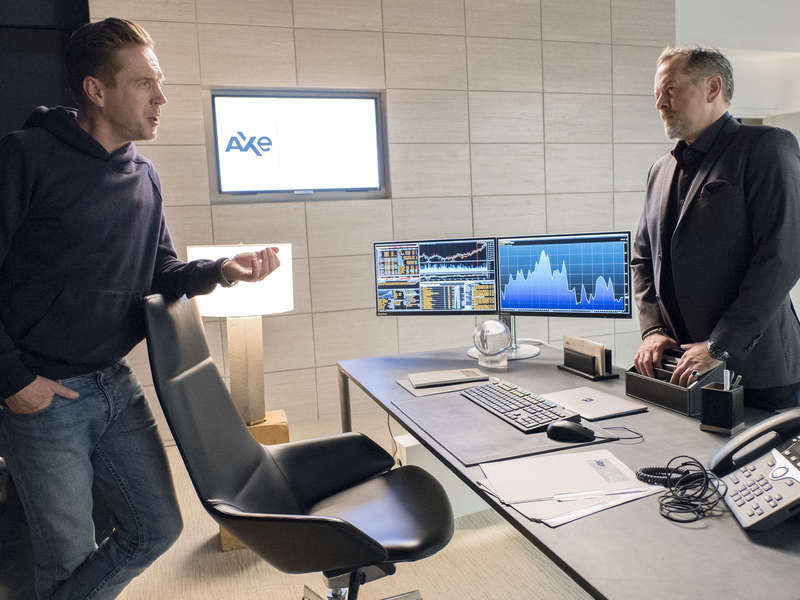