Before we really get into this, I want us to take a moment—you and me, just us two—to talk about David Costabile and Mike “Wags” Wagner.” I want you to think about the way his face crinkles with joy when he learns his boss Bobby Axelrod wants to take on Black Jack Foley, the most powerful man in New York. “Rough him up?” he says, beaming like a kid on Christmas morning. “I’m all for it!” I want you to consider how, when his underling Maffee razzes him for his pathological partying, he not only verbally menaces the guy but raises his leg and puts his foot on his desk while he does it, like a dog about to mark his territory. I want you to savor the way he turns to the brokerage goons who are courting Axe Cap’s business, insists on ditching their boring business dinner for something more…exciting, and fucking says “Fire walk with me” like a David Lynch demon. I want us, you and me, to treasure this man, this character, this performance. He is a delight undeserved, and yet here he is.

That’s more or less the way I feel about Billions in toto. How this show became one of the tightest, smartest, and most entertaining series on television this year is a mystery I don’t think I’ll ever get to the bottom of, but I’m not about to look a gift horse in the mouth. As of “The Kingmaker,” this week’s episode, Billions is serving up a type of tight, aphoristic writing we haven’t seen since Mad Men. It’s not looking to tear your guts out the way Matt Weiner’s classic drama was, (though as we’ll see, it may occasionally do so anyway), but that’s fine. We could all use an unimpeachably written drama about the evil that capitalist men do right about now, don’t you think?

And while it’s mostly individual bits of dialogue that blew me away, it’s important to note how skillful the plotting is, too. For example, take a look at this episode through the lens of old money versus new money. Weird, isn’t it, how old money somehow comes across as more virtuous—heroic, even? In one corner, you have the Chucks Rhoades, Senior and Junior, dressing up in white tie and sitting in the Yale Club and smoking impeccably aged cigars and waxing nostalgic for a time when people did things the Right Way: hand-engraving their invitations, “running out ground balls to first, knowing that ‘martinis’ mean ‘gin’.” Their ally, the titular ‘kingmaker’ Black Jack Foley, lurks in a wood-paneled stateroom as intimidating as anything in which Vito or Michael Corleone held court, and thanks to actor David Strathairn he more than owns the space; as he himself explains of one of his tactics, which could easily stand in for his whole persona, “It’s not supposed to be stylish, it’s supposed to make you feel a little bit ill, like an out-of-season oyster.”

And who opposes these scions of privilege? Bobby Axelrod, a nouveau riche scumbag who’s looting a working-class community upstate, and “Buffalo Bob” Sweeney (Matt Servitto, The Sopranos’ Agent Harris), a salt-of-the-earth type who sent his gay son to a conversion camp before such things were considered gauche. In a fight between these power players, the side we’re meant to take is clear, right down to the final Hold Stead–soundtracked shot of the Chucks strolling arm in arm in triumph over their rivals. Foley’s flirtation with Sweeney’s candidacy, which occupies much of the episode, turns out to have been an elaborate ruse to test Chuck’s mettle, and in threatening to destroy the man’s reputation by exposing his cruelty to his son Chuck passed that test with flying colors. Meanwhile, Axe is…well, thanks to his plan to loot the town of Sandicot just to prevent his company from having a down quarter, we know what Axe is now, don’t we? Every bit the barbarian he seems when he bursts into the Yale Club in his affected biker-dude gear, shouting obscenities and bragging about “drinking that town’s milkshake.”

(As an aside, the show has gotten really smart with its constant movie-quoting. Note that Axe gets the There Will Be Blood reference correct, just as Wags nails the Twin Peaks quote. As you’d expect: Paul Thomas Anderson and David Lynch are in the film-dude canon. However Wags misquotes Ang Lee’s Brokeback Mountain “play it again, Sam”–style, bobbling the famous “I wish I knew how to quit you” line the way countless bros who see it as a joke rather than a declaration of desperation have done. Yep, sounds like Wags.)

So yeah, when the Chucks sneer at this breach of decorum—razzing him for “losing your religion in the Yale Club,” chortlingly asking “Did Morgan at the front desk not offer you a courtesy blazer?”—you instinctively root for them against the interloper. The show makes this even easier by eschewing what it might have done last season and dropping the expected fight between Junior and Senior over the elder man’s meddling with Axe’s Sandicot casino, which he’d done without consulting his son; after all, intentional or not, the fallout has given the younger Chuck the issue he needs to build up his polling numbers upstate, positioning himself as a defender of the people against vulture capital. “Maybe, in the end, you’re the one guy that does get to fuck ‘em all!” Chuck Sr. exclaims admiringly as they share celebratory cigars; there’s context here involving an old joke about two bulls on a mountaintop and a valley full of cows, but you don’t need it to appreciate the gleeful vulgarity of the sentiment.

But is there any way to interpret this clash other than as a warning about the corrupting influence of capital? After all, what turned working-class kid Bobby Axelrod into an ostentatiously motorcycle-riding maniac who can’t bear to lose? What gave Foley the power to make or break men on a whim? Axe is just the new face of a very old racket, one he’s never really had to do battle against until now. Whether he wins or loses is immaterial. The problem is the game.

In the episode’s most emotionally grueling moments, it’s Wendy Rhoades who appears to recognize this. During a brief conversation with Chuck as they do their routine custody swap, she apologizes for their fight the other night, in which they angrily asserted their right to see other people. Chuck returns the apology, and more, he comes clean about a date and a kiss with that woman in his jiu-jitsu class that director Oliver Hirschbiegel elegantly reveals in wordless flashbacks. That’s a great way to communicate the ephemerality of the date: How much could it mean to him if we’re not seeing it until after the fact? But Wendy’s mirrored flashbacks to her one-night stand with the Elon Musk manqué played by James Wolk are a different story. We saw that story unfold in all its sensual glory at the time. Watching her remember it, watching her struggle with whether or not to reveal it, watching her ultimately opt to keep it a secret and simply tell Chuck how good he looks in his tux—it makes your stomach ache with the effectiveness of its portrayal of the reasons why we lie.

So later that night, tears in here eyes and wine in her system, she calls Taylor, the hotshot young analyst who’s rapidly eclipsing their mentor Maffee at Axe Cap. Taylor had been concerned not just that this relatively decent guy, who’s gone out of his way to give them credit for their own ideas instead of stealing them for himself, is clearly slipping just as his former protégé is on the rise. But more to the point, they wanted to know if these feelings of guilt and concern had any practical use. The answer, according to Wendy, is yes. “Don’t forget ‘I don’t like to lie,’” Wendy warns Taylor, referring to the latter’s refusal to sugarcoat Maffee’s poor performance. “If you start to feel yourself not feeling, do what you did the other day and come find me, before it’s too late, for both of us.” Taylor, no dummy, understands this call is about more than just Maffee, But even so, the advice is sound…not to mention an echo of similar coaching the great Dr. Gus gave them earlier in the season, insisting that when things feel sour, Taylor should beat a strategic retreat to the aspect of the situation that feels right and good. For his part, Dr. Gus resurfaces along with fired chief-of-staff Stef Reed as disgruntled ex-Axe Cap employees making common cause with Bryan Connerty and Kate Sacker to take the boss down. See? The pieces fit perfectly on this show these days. You can connect a heartfelt hidden confession like the one Wendy makes to Taylor with a screwball macho plot grenade like Bryan bonding with Gus over the bushido code. This show gets to fuck ‘em all. 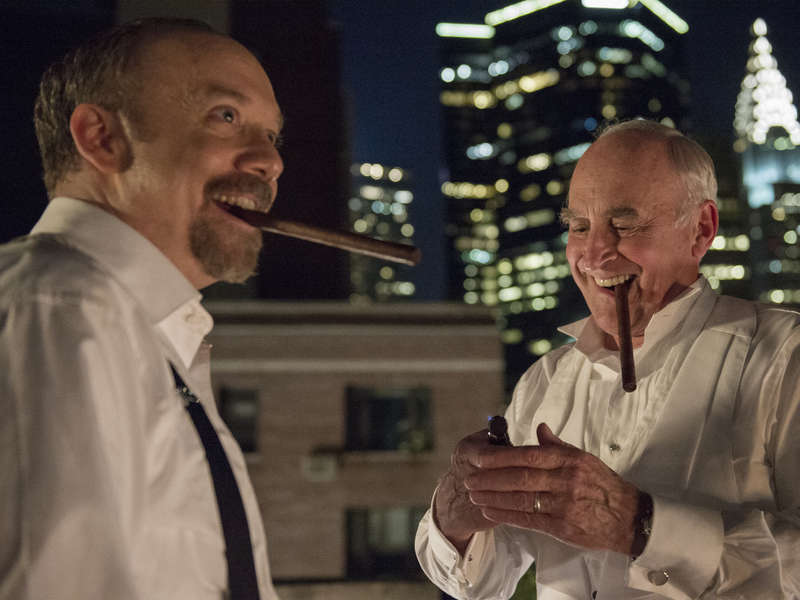