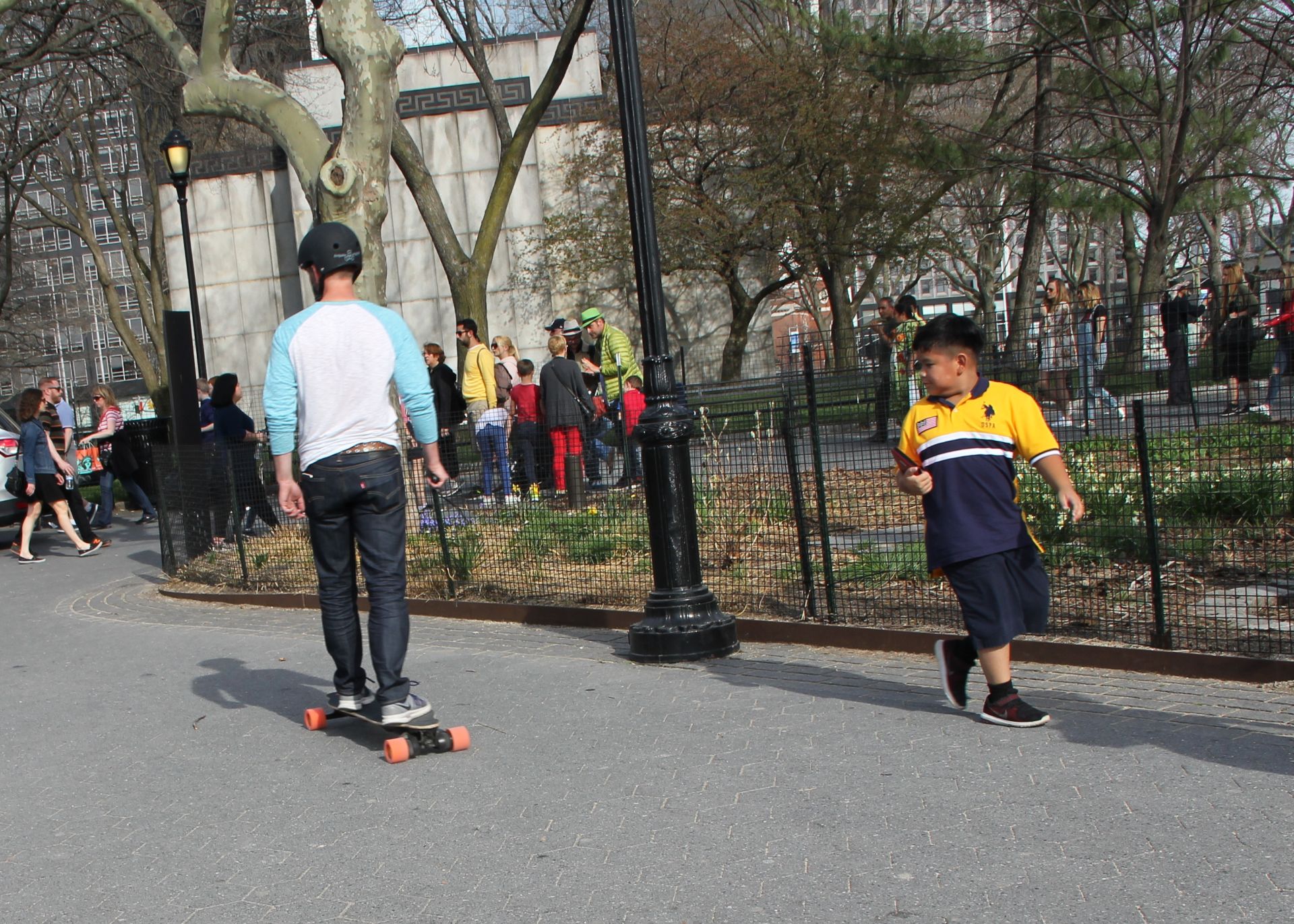 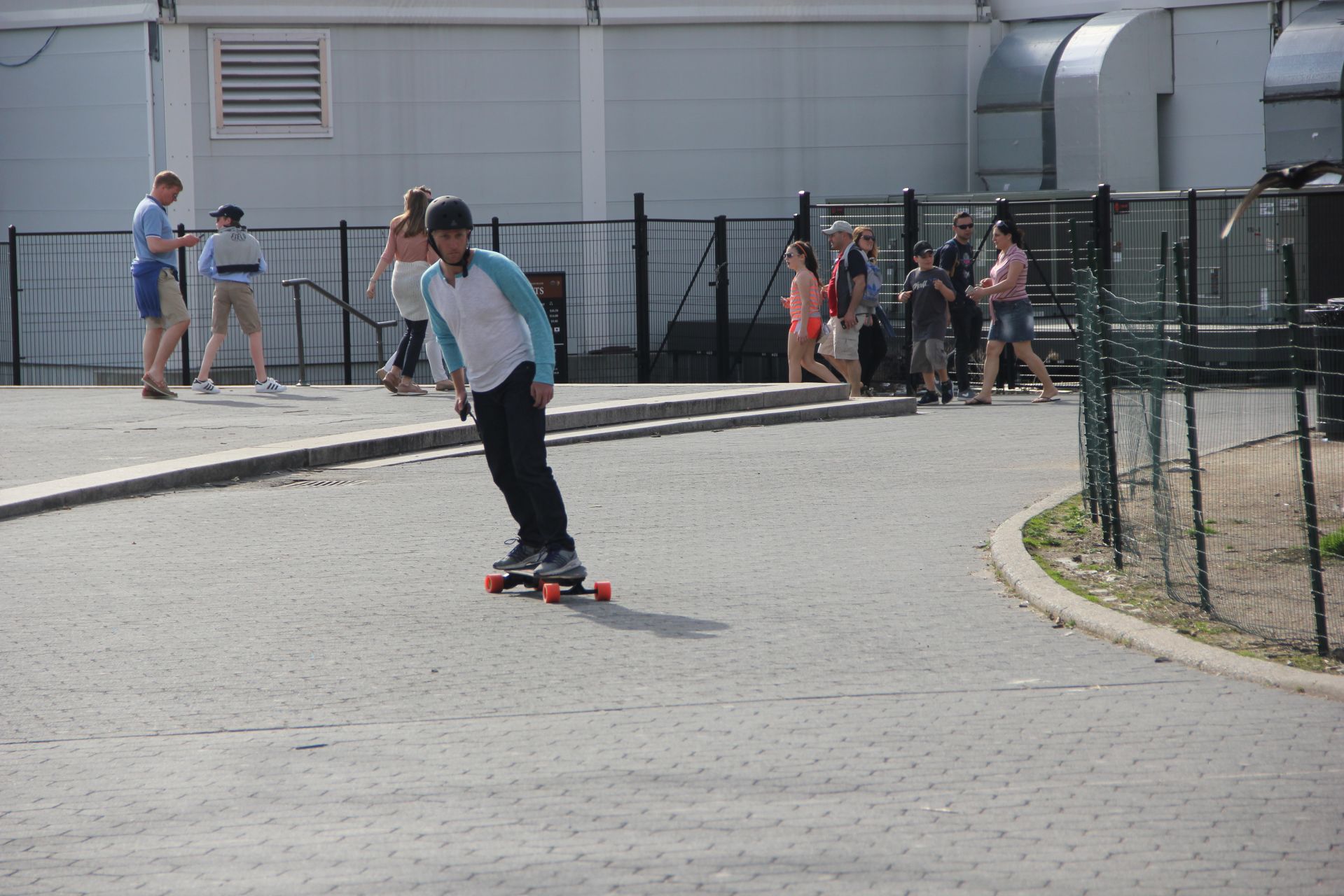 Pivoting out of a turn.
Brady Dale for Observer 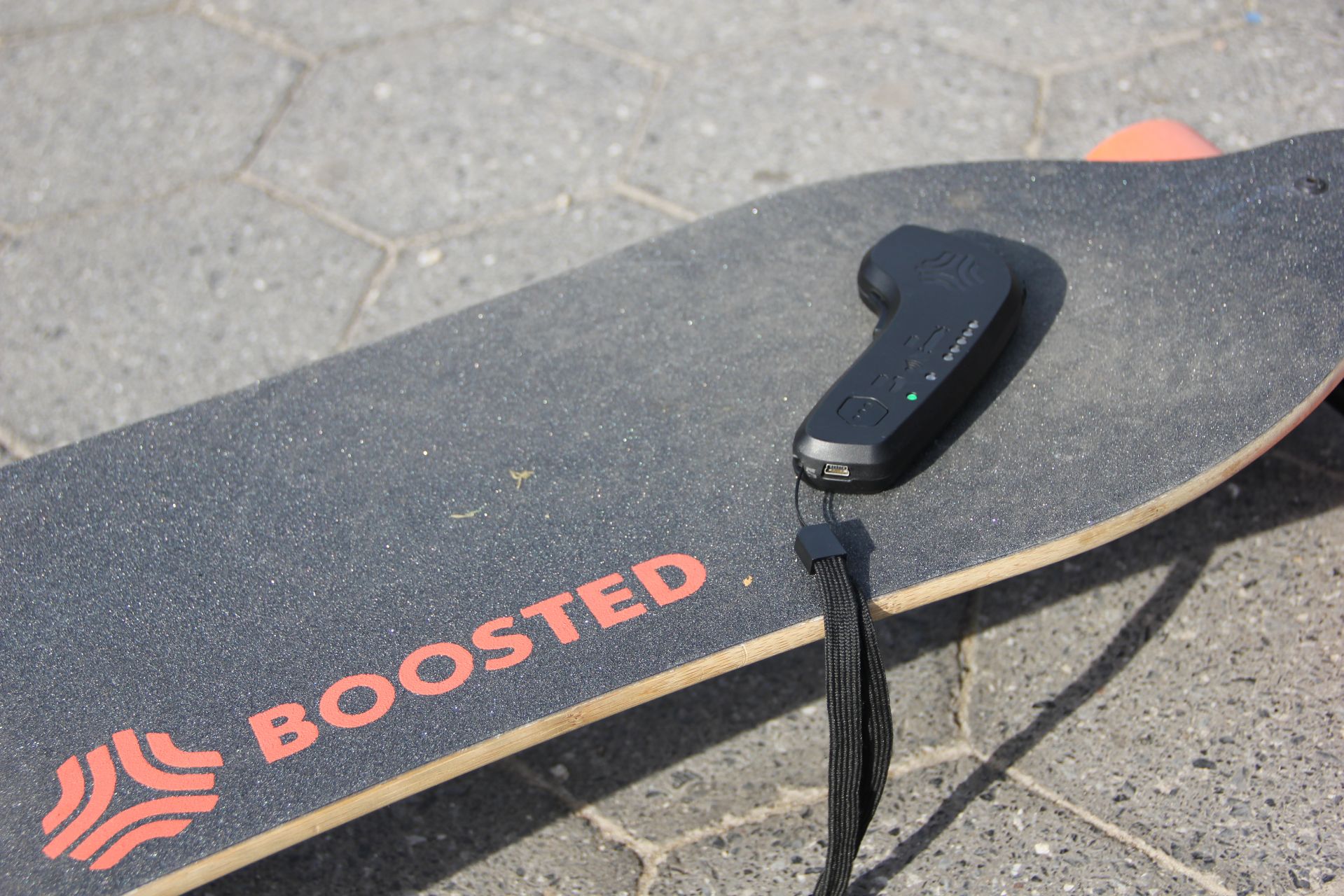 The handheld controller, shown with the board. It comes with four modes depending on how aggressive a person wants to ride.
Brady Dale for Observer 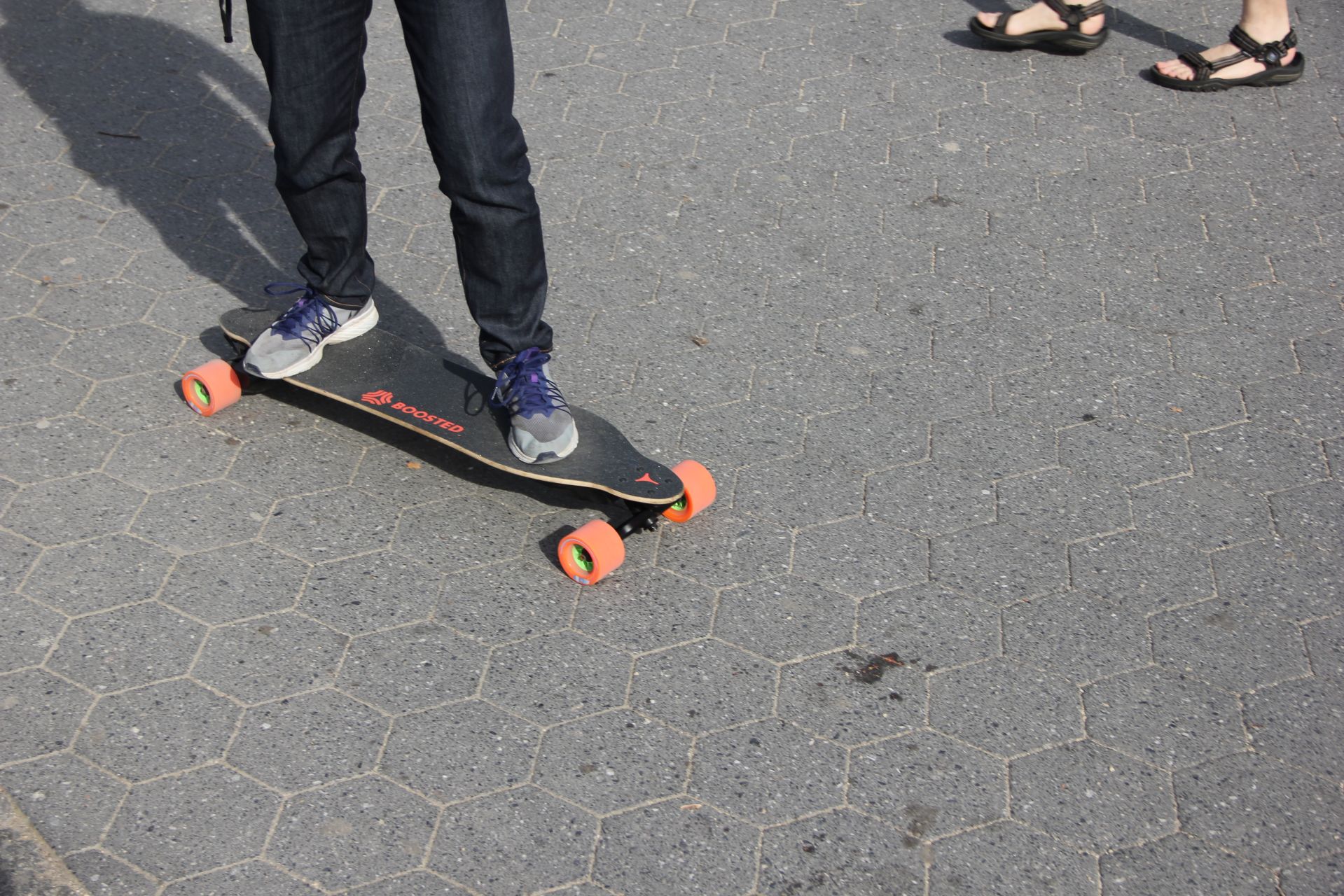 The Dual+ has a slightly more gripping tape on top than the slightly less powerful Dual.
Brady Dale for Observer
Advertisement 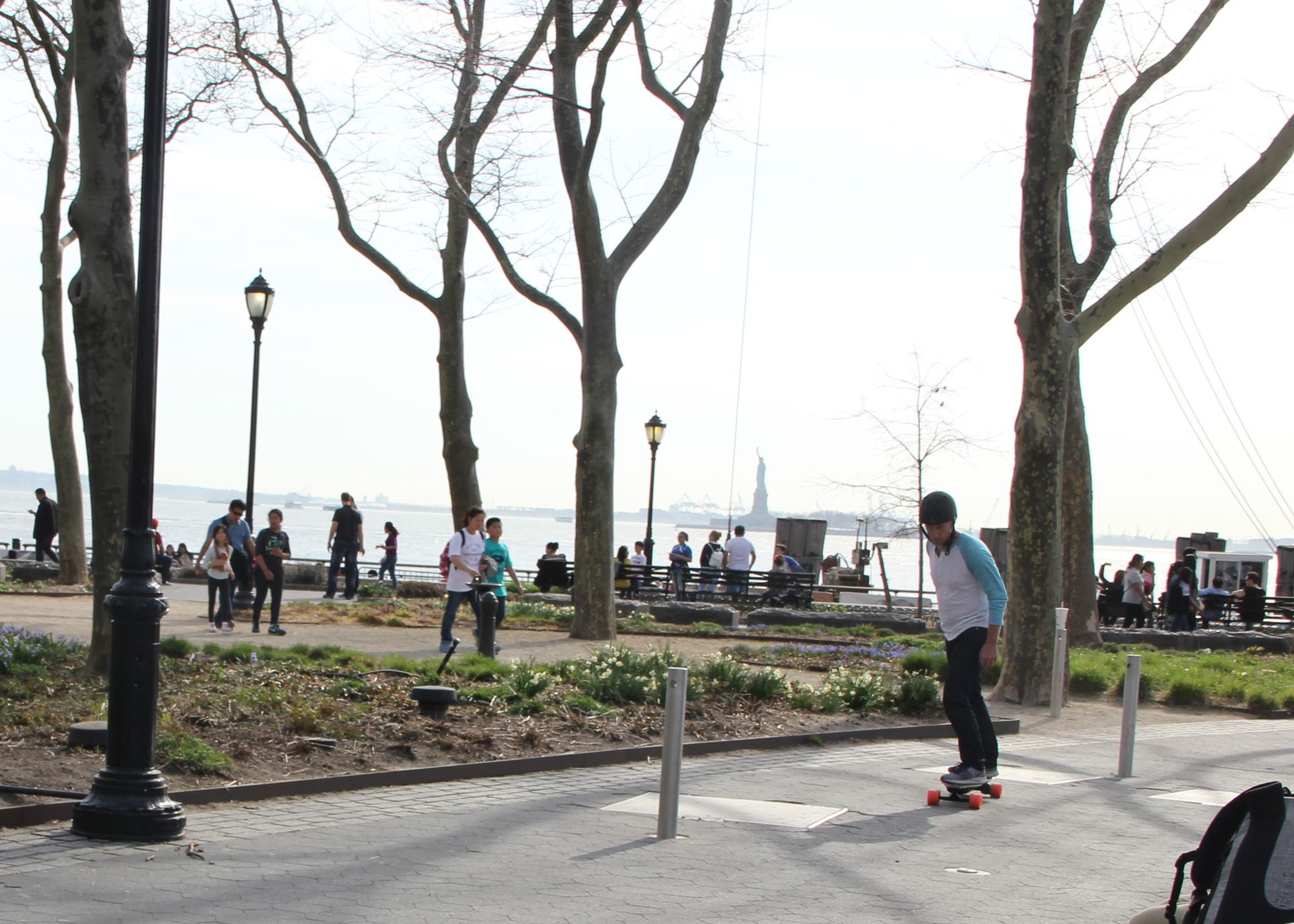 Electric skateboards are about liberty.
Brady Dale for Observer 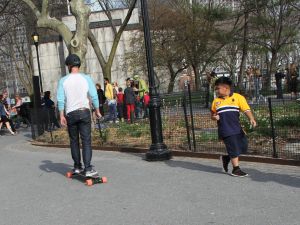 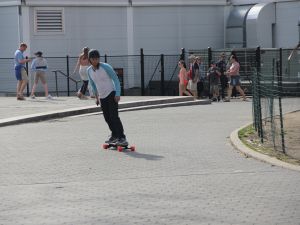 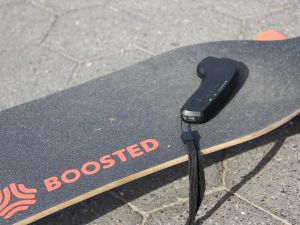 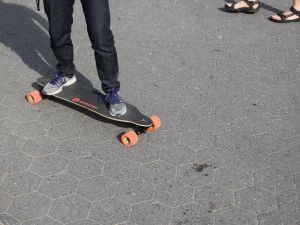 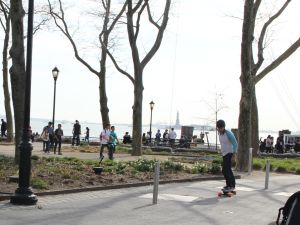 As soon as I arrived at SXSW this year, I started seeing guys tooling around Austin on electric skateboards. If you see it in Austin, it could be the next Twitter or it could be the next Meerkat. It’s tough to say, but it was a sign that the early adopters have begun trying out the new mode of transportation.

When last we spoke about electric skateboards, we discussed the boards from Acton, which makes hub-powered boards (that is, the motors are inside the wheels). Most electric skateboards’ power comes from a belt-driven system, run by a motor outside the wheels. So in order to offer a more complete perspective, here’s our take on that other paradigm.

The key disadvantage of a belt driven board is that if the battery runs out and the rider needs to kick to cover that last little bit of their ride, the belt puts up a tiny bit of resistance. It’s just a little bit, though, according to Bobby Dunn, Boosted’s marketing guy who gave us our run with with one of their board’s in Battery Park. In fact, he’d just come back from a long run in Brooklyn and ran out of power in the last few minutes. He was able to kick his way through the last little bit of his ride.

(I watched him demo kicking but didn’t try it myself because it’s been a long time since I properly skated.)

On the other hand, Dunn said that the upside of a belt drive is added stopping power. Their Dual+ model, the one we tried, gets up to 22-mph according to its website, and Dunn said on an open road under urban conditions, he’s not afraid to get up a good head of steam because he knows the board has emergency stopping power if he needs it.

The board’s deck is one of Boosted’s big selling points. Rather than the four-year-old Mountain View-based company making its deck in-house, they turned to Loaded Boards, a company that has been making skateboard decks since 2002. The attached battery and the engine are by the trucks at each end of the board, so that there’s nothing but deck in the center. This allows the bamboo board to have a springy bow shape that smooths riding over bumpy, rocky city streets. Intriguingly, the wires connecting the two are laminated into the deck itself.

“It’s got lots of bounce on it,” Dunn said, demonstrating by hopping up and down on the board and showing off its trampoline-like play. Many electric boards are stiff because they build some of their technology into the board, which takes away that cushion, so “your body just kind of hurts after a while,” Dunn said.

Like Acton’s boards, Boosted’s is not one piece of equipment, but two. Riders control the board with a handheld remote control. Boosted’s has a trigger on it that has to be engaged in order to the board to respond, then its power and brakes are controlled with a dial under the thumb. “One thing we’re kind of known for is how smooth this is,” Dunn said, as he demo’ed the controller. In my very inexpert opinion, it was quite good. Set on the beginner mode for my test ride, I didn’t really need to lean into it as the board started in order to prevent losing balance. It started off gently enough that it felt fine.

Once again, I was amazed by how much easier riding a board is when you don’t have to kick. I’m not saying it’s effortless or that there aren’t moments in which I didn’t feel a bit off kilter, but it’s so much better than learning a traditional skateboard. It wouldn’t take long to get the hang of a board well enough that a person could easily bop around the area within a few miles of home.

Dunn said he uses his Boosted Board around hilly San Francisco on a daily basis. He said it’s a way of getting around quickly that doesn’t leave you sweaty. This might not be true of everyone. It’s easy, but it’s not inactive. Your body needs to do a fair amount of work to stay balanced, so a decently long ride on a modestly warm day would likely leave some folks with a a glow, though probably less than from a bike and definitely less than a traditional skateboard—those things leave you a mess.

Boosted has two versions of its board, the Dual ($1299) and the Dual+ ($1499). The latter has a little more power to go a little further and take on slightly tougher hills. Both get a max of seven miles on one charge. As we shot Dunn running around Battery Park on his board, it turned a lot of heads while we watched. It’s hard to imagine another kind of motorized personal transportation that can accomplish the same thing at that price, and riders never have to look for parking.