When I told American Gods co-creators Bryan Fuller (Pushing Daisies, Hannibal) and Michael Green (Logan, Kings) that I watched the four episodes offered to press in one sitting, Green gasped. “My God,” he said, “that’s like trying to digest an entire meatloaf.”

This is a surprisingly accurate comparison, actually, but in the most magically positive way possible; American Gods is a wonderful endurance test, a trippy, violently vibrant homage to Neil Gaiman’s 2001 novel of the same name. What begins as the story of fresh-from-jail ex-conman Shadow Moon (Ricky Whittle) and his enigmatic new employer Mr. Wednesday (Ian McShane) expands into a sprawling war between Old Gods and New Gods, interspersed throughout with “Coming to America” vignettes that detail a specific god’s journey to United States soil. Much blood is spilled, the images often venture into the beautiful grotesquery Fuller perfected on Hannibal and, yes, [spoilers] a goddess does eat a man with her vagina roughly 15 minutes into the premiere.

I sat down with Fuller and Green a few weeks before American Gods‘ debut to discuss bringing Gaiman’s madcap imagery to life, the near-impossible challenge of finding their Shadow Moon and the delightful story of meeting Crispin Glover for the first time.

*minor spoilers for episodes 1-4 of American Gods to follow*

I’d love to know the discussions that were had prior to production. Because nothing is shied away from here, especially scenes from the book that people said for years were unfilmable.

Michael Green: If you have a camera, anything is filmable.

Bryan Fuller: We knew we had one season to tell our story because we weren’t going to get through the book in one season. What was enlightening during the development process for the first season was the support of the network to slow the story down. We had originally structured something that was much more aggressive and burned through more of the book. Whenever we stopped and dug into character, we found we had reason to stay still for a while and explore. There may be those in the audience who complain about the pace of the show. But for us, we wanted to take full advantage of telling the tale at the rate we felt most comfortable telling it.

Michael Green: It’s not a movie. It’s not even a trilogy of movies. Nor is it traditional television. It was something that allowed for its own pace. As far as initial conversations, we never had a thought that there was something that was unfilmable. It was always “what we film should be good,” then we had to define what “good” meant for this show. When you’re doing something that is fantasy, you have to create levels of reality that are, if done right, believable. Then you can have the experience we had reading the book, which is that the world is magical as long you met the right one-eyed man to help you see it.

What are some elements of the show that came once you did realize you could slow the pace down?

Bryan Fuller: I would say episode seven, which is the Essie Tregowan tale from the book. We were having conversations asking how much of the episode this tale should take up. The closest another “Coming to America” tale took compared to the Essie Tregowan story was 20 minutes, so like an entire third of an episode. But [Essie Tregowan] is essentially three-quarters of an episode. There was a lot of concern and fear of, “are we going alienate the audience because we are leaving our main characters to tell this tale?” For us, it just felt like an accurate representation of reading the book, which does take those flights of fancy into these vignettes.

It was also our bread-and-butter in terms of making sure the show is understood and identified as a genre show. Because if you’re telling the tale of Harry Potter, you better show the audience some magic. That was our fear of just focusing on Wednesday and Shadow for so much of the story; because there’s magic, but it’s obfuscated by Wednesday’s charms and distractions. We wanted to see, demonstratively, that this is a tale of gods, of wonder and awe. We had to deliver something cinematically, and that’s what those “Coming to America” vignettes give us the opportunity to do.

That’s interesting because in the fourth episode you go back and tell a very human-focused story with Emily Browning’s Laura Moon. Why was that episode the right time for that?

Michael Green: We saw that episode as an extended “Coming to America” of a new god entering the chess board, as Laura Moon comes back different than she was. We’re also very conscious that we were giving the audience three episodes that, although they’re very different, they behaved of a piece. They were all directed by the same director, David Slade, who did a wonderful job, and all three described a show that people, after three of them, might feel that they can predict. We were curious what would happen if we then structured an episode entirely differently, and gave it a different protagonist. It showed to us, as writers, and the audience, as viewers, that there was another gear on this car that could go at a very different rate, and perhaps in reverse.

Something that fans were very much following before the premiere was the casting news, which has been incredibly on-point. Which role wasn’t easy to cast?

Bryan Fuller: Most difficult, easily, was Shadow. That was a fascinating and fantastic process, retrospectively, but while we were in the middle of it, we knew there was such a tightwire act for this character to find the balance of not necessarily driving the story forward but being the audience’s way in. Ricky Whittle auditioned 16 times; he was always in the mix but the mix was a soup and we didn’t have an order of who we liked more and who we liked less. But every time we brought Ricky in he advanced in our minds. Over 16 auditions there were people that, perhaps early on in the process, were more likely to be cast that plateaued and Ricky continued to get more Shadow and more Shadow every time he came in.

He demonstrated not only that he is a dedicated, disciplined actor but a lovely human being to be around, and exactly who you want to cast as number one on the call-sheet because that is a leadership role on the stage. You want somebody who is going to come in like Ricky Whittle did and hug the crew, dance, and sing, and chat, adore and respect the crew, appreciate that they’re there before him, after him, they don’t get to see their families while they’re making this show. Ricky Whittle championed every person on that stage.

On the complete opposite end of that, what was the easiest role to cast?

Bryan Fuller: Media (Gillian Anderson) and Easter (Kristin Chenoweth). We knew immediately that Kristin Chenoweth was going to be Easter, there was never a debate in our minds.

Michael Green: It was literally just a question of what dates she was available. One phone call from Bryan, she said: “tell me when.” This was well before it was written; a brief description of our vague intentions.

Bryan Fuller: The same with Media. We knew we were going to be asking Gillian to be in this show; she’s a fan of Neil Gaiman’s, and we worked together well [on Hannibal] in the past. So we presented to her, essentially, not so much a script but the idea of manifesting as a variety of dead celebrities that were going to be a hybridization of Media. Which was another strange alchemic performance, because it requires wit and savvy and comedy and drama, and impersonation.

Michael Green: I remember [Bryan] came back from a lunch with her and said, “Gillian thinks it would be really fun to play Marilyn Monroe.” We knew what the character Media was going to be pitching to Shadow in this one scene, but the delivery system hadn’t been selected yet. It was like “choose your destroyer.” Suddenly, the fuse was lit on a scene that is now very memorable as a direct result.

The character Mr. World (Crispin Glover) isn’t in the first four episodes, and he’s not even present much in the books.

Bryan Fuller: Oh, he’s not even in the show. That was all just a joke. [laughs].

Michael Green: Mr. World shows up in the episode immediately after. He’s in the fifth episode.

How do you eventually introduce the character?

Bryan Fuller: We knew that he was the antagonist to Wednesday’s protagonist. The concept of who Mr. World was as a mafioso was something that was indicated in the book, but not necessarily explored because, you know, Neil couldn’t write a 2,000-page book. Or he could, but they wouldn’t publish it.

Michael Green: Now they probably would.

Bryan Fuller: We knew that we wanted to have him represented and it had to be iconic, so we had to get an iconic actor. We suggested somebody like Crispin Glover to our casting people, and they called us like an hour later and said, “you’re having breakfast with him tomorrow.” It was a hot Los Angeles summer day, Michael and I met him in a cafe in Silver Lake. My back was to the door, and Michael sort of gasped and whispered, “here he is.” I turned around and he was peddling up on a bicycle in a velvet suit with a derby hat. He politely parked his bicycle, took off his hat before he entered, and we immediately fell in love.

Michael Green: I remember when we were working on Mr. World’s wardrobe, Crispin came in, and our department said, “It went really well but we have this beautiful hat for him and he’s debating it.” I went to him and said, “Crispin, we need to remake the moment you walked into that cafe. You don’t need to wear the hat you just need to take it off.” Because I wanted to recreate that moment we got to see because we wanted the audience to meet him the same way we did on that day. 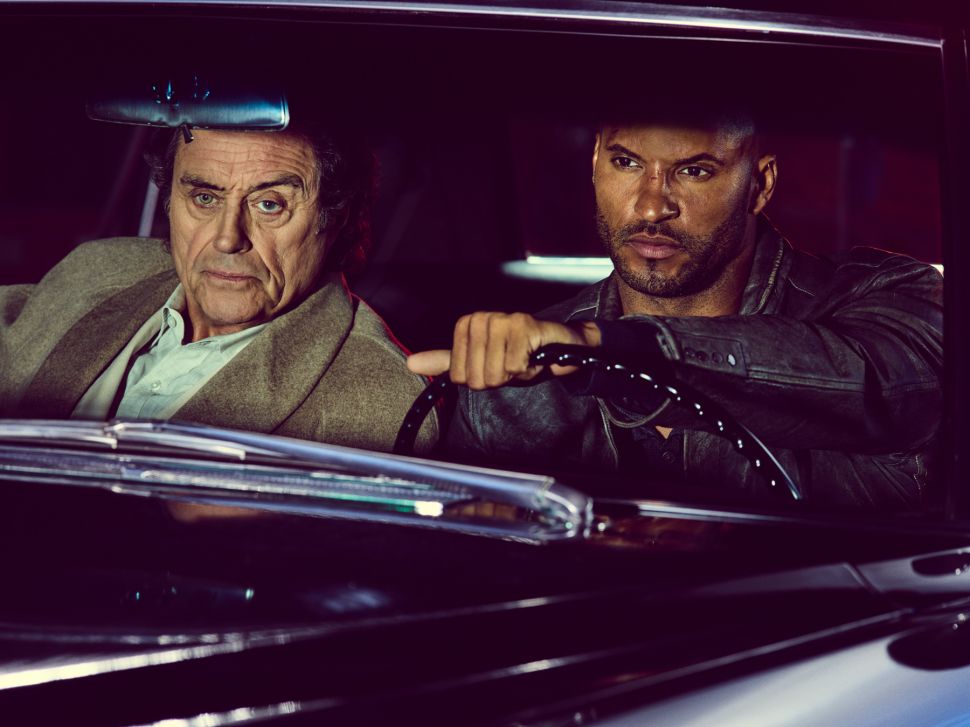