Let’s be blunt—stoners lighting up tomorrow to celebrate the weed-appreciation holiday known as 420, are going to want some snacks on hand.

This meal kit is worlds away from the health food similar services like Blue Apron and Hello Fresh are serving up, and that applies to BurgaBox’s everyday meal kits too. The company’s brick-and-mortar locations in Boston became internationally known for their unique mammoth-sized burgers. The eatery—which also operates food trucks— was recognized as the winner of Rachael Ray’s “battle of the best burger” and featured on other shows like Guy Fieri’s Diners, Drive-Ins and Dives. The best selling burgers from the restaurants make it into the meal kit service.

But Chuck Sillari, founder and co-owner of Boston Burger Company, refutes that BurgaBox is just a subscription meal service.

“It’s really not a meal kit. It’s a party kit,” he told the Observer when we covered the launch this past November.

And his take on the 420 box is no different.

“I thought it would be funny to create a burger to help with the munchies,” he told the Observer about the new box   . “We took every food we could think of that someone would want when they had those cravings and placed it on a burger: mozzarella sticks, fries, onion rings, fries mac & cheese, bacon, cheese, BBQ sauce—the works. The name ‘420’ was picked to resonate with that crowd as a sly wink. People who know what it means think it’s great and people who don’t know what it means don’t know.”

I gave this food a try, and oh boy. It is gluttony on a plate, but it is just so delicious. I have to admit I knew I couldn’t stomach it all at once (not even while under the influence), so I made the sides and burgers on separate days. The $65 box says it feeds two, but there is definitely enough food to feed a third hungry mouth. You can also upgrade to a box for four people (which includes two extra burgers and extra sides of baked beans and cole slaw) for another $15.

Another important factor is that it’s simple to cook (and definitely not too complicated to do while high). It can be done in about 30 minutes thanks to BurgaBox’s unique way of preparing the ingredients. While other meal kits just put the groceries into boxes with cooking instructions, this company is actually preparing and partially cooking some of the food before it’s shipped.

“Things like our sauces, mac and cheese and beans are scratch made by our chefs,” Sillari said.

You can order the box here. 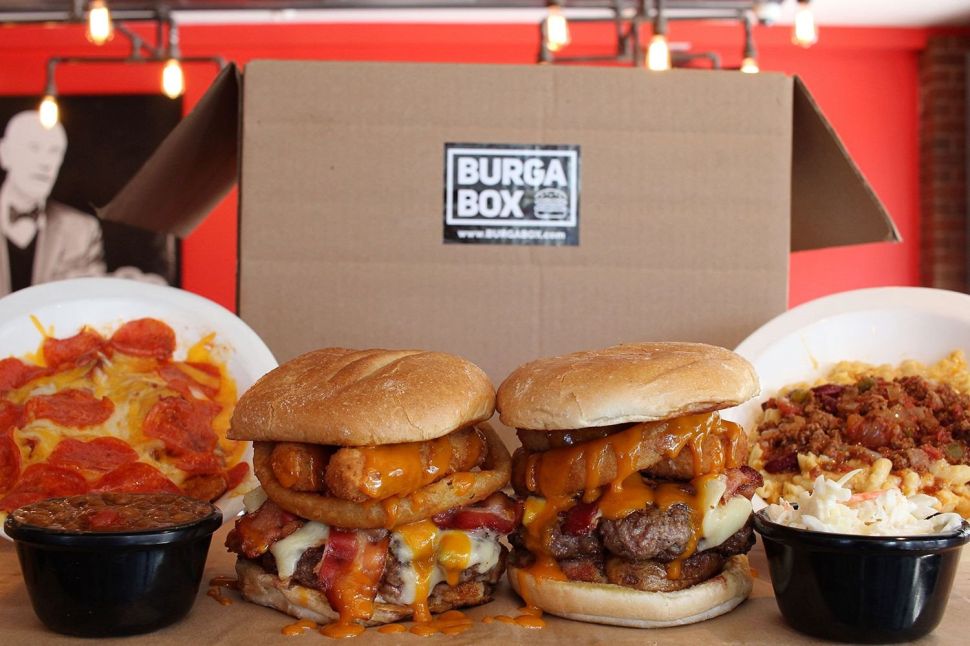