As a kid I laughed to cassette tapes of Don Rickles. I had no idea I’d actually get to meet Mr. Warmth in person. In 1985 at the second inaugural of President Ronald Reagan, my post was Frank Sinatra’s dressing room.

I had eaten two bags of candy kisses meant for Frank and his guests when all of a sudden, here comes Frank Sinatra, Frank Sinatra, Jr., Dean Martin and Don Rickles and his wife Barbara.

I was always a huge fan of Frank Sinatra. They all said hi but Rickles stopped and said, “Hi, who are you? I’m Don Rickles and this is my wife, Barbara.”

I said, “I’m Scott Alswang, a Jewish kid from Jersey with the Secret Service.”

He said a Jew in the Secret Service? And I said, Yes sir, I got a masters degree instead of a medical degree—that’s why I carry a gun.

He asked, Can I see it? I showed it to him and he smiled and said, Do I have a minute? I said, Sir, unless the president comes to visit Mr. Sinatra I’m here all night.

We marched into the dressing room and Frank Sinatra was sipping on Campbell’s Soup when Don announced loudly, “Hey Frank, I’ve got my own guy—a Jewish Secret Service agent – show ’em the gun, kid.” Which of course I did, and Sinatra smiled.

Rickles wowed the inaugural crowd and he told me meeting me gave him some new material. If you Youtube his appearance, you can see Mr. and Mrs. Reagan doubling over with laughter. “Remember when you were governor, and you used to walk over to my table?” Rickles asked the President. “Now you’re big. And you’re getting on my nerves.” And he does chide the Secret Service and the agents enjoy a good ribbing.

You would have thought that would be the last I heard from Don. But he called the NY field office and invited my family to see him in Atlantic City and praised me near the end of his show, which he would do every time I was in the audience.

He invited me and my friends backstage and a true friendship was born.

In 1993, I was one of the closest survivors of first attack on the WTC.

Don called me and when I got home late that night from the hospital I called him back and we spoke of the tragedy of that day.

He joked, You Jews will do anything for a free meal and we met and ate with him and Barbara and he honored me that evening at his show.

He truly cared. In 1995 I was testifying against Ramzi Yousef in the criminal trial and was overnighting at the Waldorf protecting king Juan Carlos of Spain.

My dear friend David Ibarra, the Waldorf Towers concierge saw me enter the Towers and said, Hey I’m going up to Barbara Rickles’ room to give her a new coffee machine, wanna say hi?

She answered the door and said, Scott, what are you doing here? I said, Mrs. Rickles the government doesn’t pay that well. She laughed and said can I ask you a favor I said sure – she said Don is in Peacock Ally with Frank Sinatra and it’s late and Don has to perform for Frank’s 80th.

I said Mrs. Rickles there are many things I can do but stopping Don Rickles from drinking with Frank Sinatra is not one of them.

I met them and Don was so gracious and reminded Frank of our first meeting. I stayed for an amazing conversation for an hour and it was a magical evening.

The next morning Rickles called my room and said, You can’t find ’em, can you? And I said, What do you mean? He said, The king! You lost him, didn’t ya!

We laughed. Later that evening he called me and said, Hey I’m being picked up to go do Frank’s party, we’d love to meet your guys.

He sarcastically said, “I’ll meet you by the motorcade,” as he learned a lot of our parlance through the years.

I had the shift out on 50th St. near the well of the Waldorf where the president and countless heads of state staged to be picked up or dropped off.

Rickles came out and immediately started to frisk my guys up against the cars.

Then he made me feel like a million bucks, hugged me and got in his limo with Barbara.

As the car went down 50th St.all of us kind of watched it mesmerized and all of the sudden the car stopped Rickles jumped out pretended to have a gun and yelled “Bang bang – you guys suck,” and smiled. We were hysterical. He was magical.

I last saw Don a few months ago in Atlantic City. Our friendship had continued through the years and we had exchanged hundreds of typed letters, precious correspondence that I’ll always treasure.

He did his act seated with Regis Philbin, and played video of various shows and roasts. He knew I was in the audience and after the clip of him performing for the president stopped to say,

“I met a young man when, at the height of my professional career, the Chairman of the Board, Frank Sinatra, asked me to honor the president. It was the highlight of my life and an honor I could never imagine. I kept in touch with that young man and we wrote each other often. I got mugged, and he sent me a bat with the Secret Service star. My United States Secret Service hat got frayed, he sent me 10 —I gave them to the LA Dodgers.

“Now this young man owns an international security firm and is still the same kind generous, affable person I met standing outside Frank’s dressing room. I adore Scott for his friendship and am proud of his success. Let’s all cheer for Scott.”

That night, only my party was allowed to go backstage and meet Don, and as always he was so gracious.

He said, If I pass, make sure Barbara is okay. I said, Don, whatever you or yours need, please. I love you. 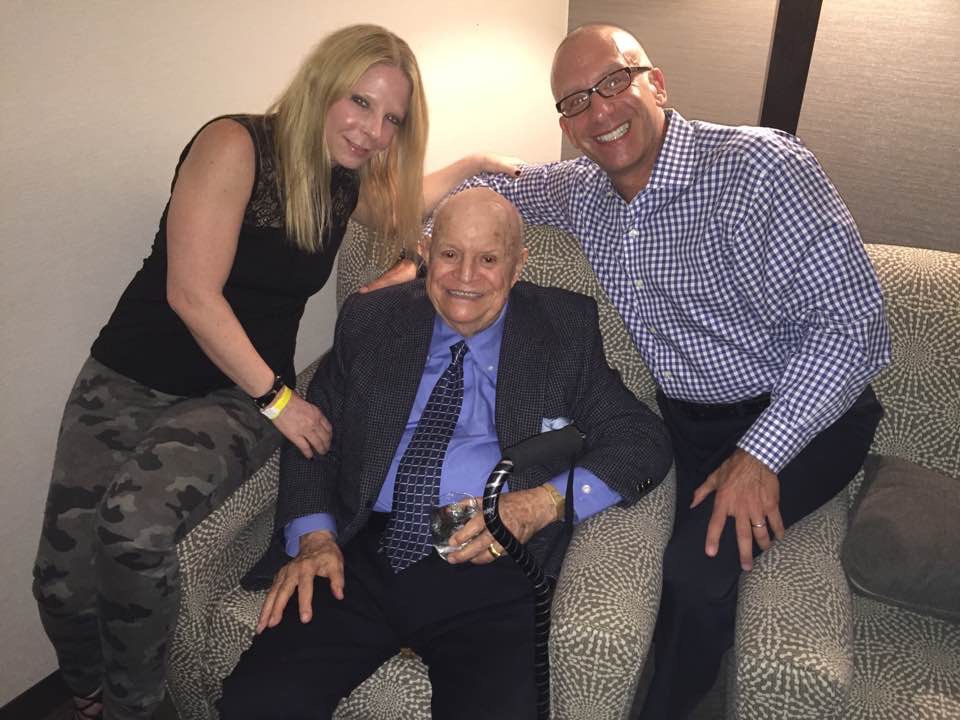