Throughout his 23 terms in Congress, Rep. Don Young has developed a reputation with animal rights activists and conservationists as one of the leading “villains.” In January 2017, Young introduced a bill that would scale back former President Barack Obama’s nearly total ivory ban, which was enacted in July 2016 and makes exceptions for “bona fide antiques and items with small amounts of ivory.”

Young has introduced similar bills in the past under the false pretenses that his bill helps elephants “without penalizing the millions of Americans who legally acquire or already own products containing ivory.” He states, “The U.S. Fish and Wildlife Service’s ban on moving ivory across international and state borders wrongfully penalizes countless Americans and institutions who have legally obtained musical instruments, firearms, jewelry, and pianos containing elephant ivory but does little to nothing to prevent the poaching of these animals. The impact of this ban, which affects Americans from all walks of life and destroys the value of countless family heirlooms, has already been significant.” Young provides no evidence that the ban negatively impacts anyone, and his argument assumes that permitting an ivory trade market will somehow help elephants.

The population of elephants has been decreasing annually by 3 percent—in large part because of widespread poaching. Every 15 minutes an elephant is killed by a poacher in Africa. Previous attempts to open ivory trade under the prediction it would decrease demand for it have backfired. In 2008, China and Japan purchased stockpiles of ivory from four nations in Africa. They hoped that flooding the market with ivory would diminish profits for poaching, but the result was a surge in demand for ivory because the boost in supply diminished the stigma attached to the market. China announced this year that it has banned all trade in ivory because the ivory trade perpetuates a demand for ivory and results in the slaughter of of elephants. Rep. Young ignores the results of such previous attempts to open ivory trade and offers no explanations for how legally acquired ivory will be differentiated from illegal if an ivory trade was opened back up. Young also wants to relax regulations on importing sport-hunted African elephant trophies to the United States.

He has a long record of ignoring science and wildlife ecology experts in favor of his own unsubstantiated assumptions. Young has called climate change, “The biggest scam since the Teapot Dome,” in reference to the Teapot Dome Scandal in 1922, when Secretary of the Interior Albert Fall was convicted of accepting bribes from big oil and sentenced to prison.

The BP oil spill in 2010 poured nearly 206 million gallons of oil into the Gulf of Mexico, killing 11 people and resulting in one of the worst environmental disasters in American history. However, to Young, the spill was “not an environmental disaster.” He stated, “I will say that again and again because it is a national phenomena. Oil has seeped into this ocean for centuries, will continue to do it.” Young most likely meant “natural” and not “national,” but his dismissive attitude demonstrates his overall stance toward the environment. He previously said in an interview with Rolling Stone that environmentalists are “self-centered bunch of waffle-stomping, Harvard-graduating, intellectual idiots” who “are not Americans, never have been Americans, never will be Americans.”

The congressman from Alaska has a history of making bizarre arguments in favor of legalizing the trade of endangered, threatened and imperiled wildlife. The Washington Post reported that in 1994, “During a congressional hearing, while arguing with then-U.S. Fish and Wildlife Service Director Mollie Beattie, Young brandished an 18-inch-long walrus penis bone and pounded it into his hand for emphasis.” The argument was over the rights of Alaskan natives to sell the sex organs of endangered animals as aphrodisiacs.

Rep. Don Young’s latest efforts to scale back the ban on the ivory trade is just the latest addition to his long record of fighting against animals rights, conservation and environmental efforts. 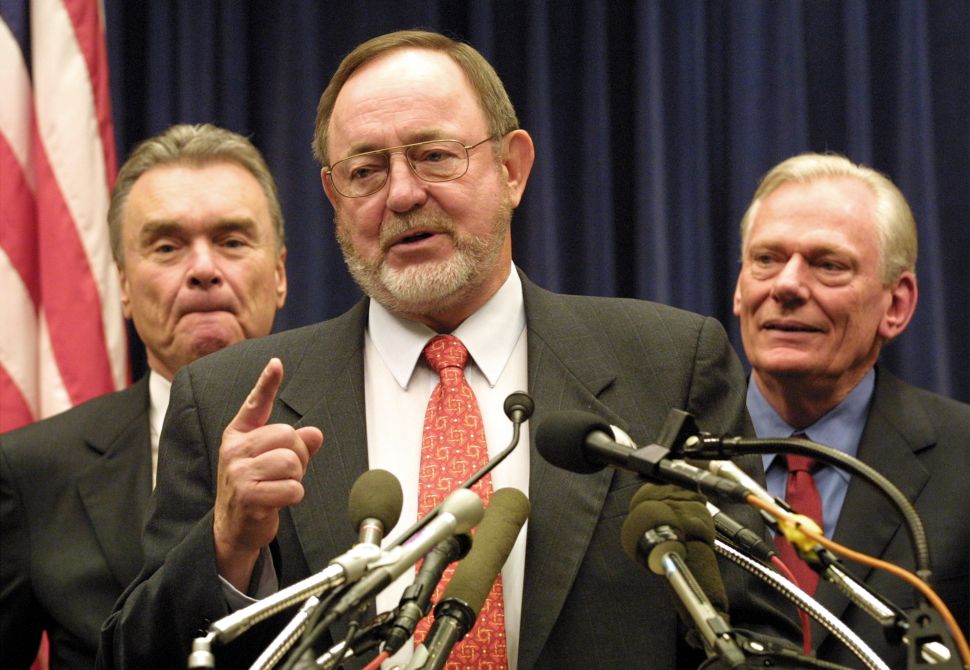