Congressman Jerrold Nadler tore into President Donald Trump’s decision to launch a missile assault on a Syrian airbase yesterday evening in retaliation for dictator Bashar al-Assad’s use of nerve gas against a rebel-held town—and further assailed the Republican commander-in-chief’s opposition to admitting refugees from the war-bloodied country.

The liberal Democrat denounced Assad’s deployment of sarin gas against the town of Khan Sheikhoun earlier this week, which killed more than 80 people, children among them. Trump ordered American ships to fire upon the Shayrat Airfield, which the embattled Middle Eastern government used to launch the poisonous strike.

But Nadler argued that the Constitution requires the president obtain congressional clearance before attacking another country.

“While the United States has a moral duty to react to the atrocities perpetrated by the Assad regime, yesterday’s air strikes represent a new course of military action that required prior Congressional authorization,” the congressman, who represents a sprawling tract of Manhattan and Brooklyn, asserted in a statement to the press. “The president’s action in attacking Syria without Congressional authorization was clearly illegal and unconstitutional.”

Trump claimed yesterday that the deployment of a chemical weapon posed a threat to United States assets and interests, allowing him to bombard the airbase without consent from the Hill. An unnamed defense official told Reuters that the salvo of Tomahawk missiles was a “one-off” blitz intended to discourage Assad from using such banned armaments again.

The attack on Shayrat marked a departure from Trump’s promises to pursue an isolationist, “America First” foreign policy and abstain from interventions in foreign lands. The president stated repeatedly on the campaign trail he hoped to collaborate with Russian President Vladimir Putin, an Assad ally, in expunging the Islamic State from its footholds in shattered Syria.

Former President Barack Obama garnered blistering criticism from Republicans in 2013 when he refused to take military action against Assad for deploying poison gas against population centers, despite having previously called the use of such weapons “a red line.”

Nadler asserted that Assad did not represent a threat to American interests, and that the president thus had no standing to attack without congressional approval. He noted he was similarly critical when Obama bombed Libya in 2011 to hasten the collapse of despot Muammar Gaddafi’s government.

“The president has no legitimate power to initiate a war with a foreign state, absent an imminent threat to the United States that does not allow time for congress to act,” the congressman said. “It is essential that the power to decide whether or not to take the country to war rest with the people, through their representatives in Congress, as the framers intended, rather than in any one person.”

The Democrat also attacked Trump for having issued two executive orders aimed at blocking any of the four million people fleeing Syria from seeking asylum in the United States. Lawsuits and federal court injunctions have thus far prevented the president from successfully implementing such a policy.

Nadler mocked the president’s display of sympathy with the children killed in the nerve gas attack three days ago—but wondered why the photographically documented deaths of many other youths have not elicited the same emotional response.

“While it is heartening to know that President Trump was moved by photos of slain Syrian children earlier this week, there have been countless images over the past few years of children laying face down on sandy shores or floating lifeless in the as they flee the devastations of war,” he said. “I hope President Trump develops the same sense of moral decency when dealing with the Syrian refugees fleeing from Assad’s brutality.”

Senate Minority Leader Charles Schumer expressed tentative support for the bombing, but called for the president to present a “strategy” to the legislative branch for the future. Sen. Kirsten Gillibrand echoed this sentiment, calling on Twitter for a “firm response” to Assad’s gas attack.

But voiced anxiety similar to Nadler’s over the bombing’s longterm implications and Trump’s decision to bypass Congress.

But the President’s unilateral military action causes grave concern, given no authorization from Congress and no long-term plan. 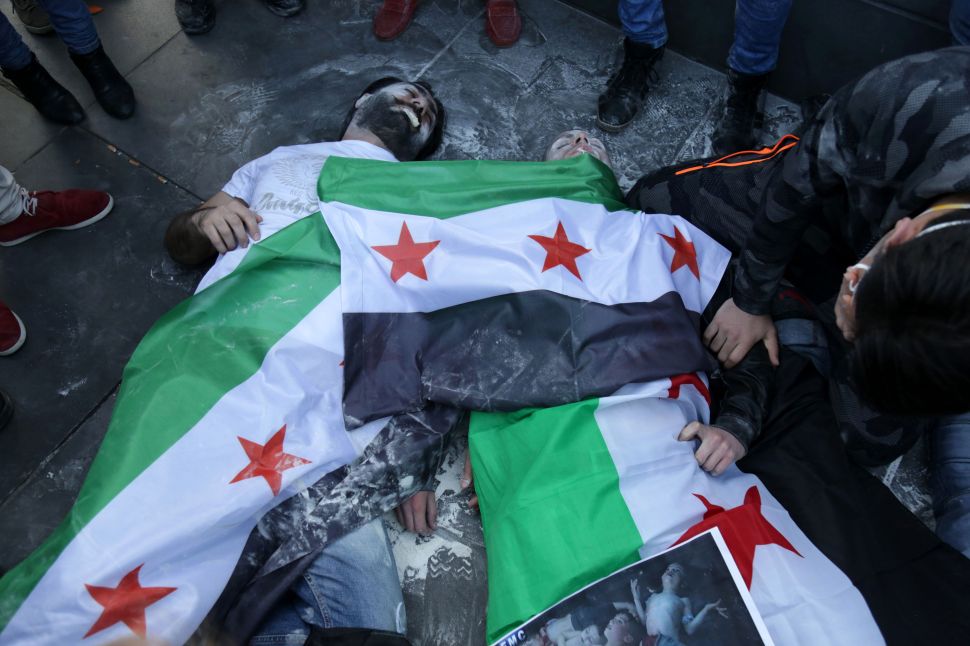