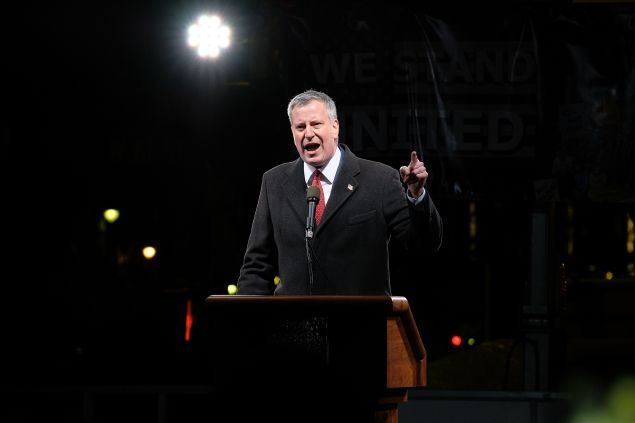 Mayor Bill de Blasio again blasted President Donald Trump and U.S. Attorney General Jeff Sessions’ “propaganda campaign” about sanctuary city policies and crime rates last night—going so far as to suggest the president lacks credibility on the issue because he “never had anything to do” with law enforcement prior to assuming the Oval Office.

De Blasio and Police Commissioner James O’Neill blasted the Department of Justice’s claim on Friday that New York City is “soft on crime,” an assertion the agency made in a release announcing it had notified several municipalities that their noncompliance with federal immigration authorities was endangering their receipt of grant monies. Sessions subsequently backpedaled and lauded the NYPD, but maintained his criticism of the liberal Democratic mayor’s approach to immigration and crime.

In his weekly “Mondays with the Mayor” segment on NY1, de Blasio dismissed the attorney general as a demagogue and the president as an ignoramus.

“Do they think the NYPD and the other police forces of this country are not addressing gang members?” de Blasio said. “It’s specious. Donald Trump never had anything to do with enforcing the law and protecting people. Jeff Sessions has had an extremist view on immigration all along. This is an ideological purism matter for him.”

Indeed, he said that Trump and Sessions are “desperately trying” to convince people that the city’s sanctuary city policy of protecting undocumented immigrants enables criminals, noting that they “keep coming back to dangerous gang members” in their rhetoric. De Blasio pointed to the continued decline in the city’s crime rate as proof those assertions are spurious.

“To suggest that because we have a compassionate and inclusive view of immigrants, somehow we’re less safe, that is part of a Trump and Sessions propaganda campaign to make people think they’re less safe because of immigrants when in fact it’s just—there’s nothing that bears that out,” de Blasio said. “The problems that some cities are having with crime are local issues, local problems. Things that happen that have to be addressed locally that are not about immigration.”

De Blasio accused the pair of “trying to do a whole head fake on the country,” recalling Trump’s announcement in March of a new Victims of Immigration Crime Engagement Office within Immigration and Customs Enforcement. He said that “that’s not where our problem is,” noting that crime is “obviously, overwhelmingly, sadly” committed by people “who are from here.”

The real culprit of urban violence, the mayor insisted, is the importation of weapons from GOP-run states with weak firearm regulations.

“We have to go to the root cause of that,” de Blasio added. “Guns are too available, the relationship between police and community is not good enough in enough places. We’re not going at the root causes that unfortunately plague so many communities. Why don’t we have the conversation of how to drive down crime rather than putting it through this prism?”

Sessions will be meeting with the U.S. Conference of Mayors at the DOJ on Tuesday to talk about public safety issues, including Trump’s interior enforcement executive order—which requires federal authorities to deport undocumented immigrants even when they have been charged with any criminal offense.