John McCain came concern trolling late last week, telling Bloomberg News that he was attempting to strike a deal with Democrats: just let Neil Gorsuch’s confirmation to the Supreme Court go through, and Republicans will preserve the filibuster so Democrats can use it at some other time.

For those of you who have memories longer than five minutes, you might recall that this sounds just like the deal McCain and his allies struck with Democrats 12 years ago, when Team Blue was threatening to filibuster Samuel Alito’s nomination to the nation’s highest court. Just don’t filibuster this time, McCain and pals reassured Democrats, and Republicans will keep the filibuster in place so Democrats can block some other nominee at some other time. Just not right now. But definitely later.

Well, Democrats swallowed that shit sandwich whole in 2005, and hey, boys and girls, do you care to guess what the special is in Johnny Mac’s Senate Bistro today?

If you guessed “another shit sandwich,” you’re our lucky winner. Don’t believe me? Here’s the menu: The Republicans are threatening to kill the filibuster if the Democrats dare to use it. But they’ll totally keep it in place, if Democrats will just roll over and play dead for their Republican masters. And they can definitely use it later. Republicans are ready to swear to it on a stack of bibles.

Does that sound familiar?

Newsflash, Democrats: Republicans lied to you in 2005, and they’re lying to you now. And the only people who have benefitted from the preservation of the filibuster since then have been the Republicans, who had no compunction about abusing the privilege when they were out of power, but are ready to end it the moment Democrats even think about using it. Ask yourselves a question: What is the point in preserving the filibuster if you’re afraid to use it?

Now, ask yourselves another question: why are Republicans trying so hard to convince you not to filibuster?

There are a few possible answers. One is that they really don’t want to get rid of it, as they benefit from it when they are out of power, and they would prefer it if you didn’t call their bluff. Another is that the optics of them changing the rules in the middle of the game to get their way might not look very sporting of them, which could be problematic in next year’s midterm elections. And a third possibility is that perhaps they don’t have enough votes to end the filibuster.

There is, of course, a fourth possibility: that they do, in fact, have the votes and will vote to get rid of the filibuster if the Democrats invoke it. But we’ll never know if we fold our hand before they show their cards.

In the end, if Republicans are bound and determined to confirm Gorsuch, and restore a 5-4 conservative majority on the Supreme Court, Democrats cannot stop them. But for heaven’s sake, don’t just fold up like a lawn chair. Call their bluff. Make them do it, and if they do, spend the next year and a half hammering them for it.

Democrats, you have nothing to lose. Saving the filibuster, only to never use it because the Republicans threaten to end it if you do, is the same thing as not having the filibuster at all. If nothing else, the end of the filibuster (which Democrats should have gotten rid of in 2009 when they were in power and Republicans began abusing it relentlessly) will provide one less thing for the GOP to hold over Democrats’ heads.

Filibustering Gorsuch will also serve as a shot across the Republicans’ bow, and a message to Democratic voters that the party’s days of cowering in fear are over. By making it clear that Republican obstructionism will be responded to in kind, Democrats can demonstrate that they are no longer content to play the role of the Washington Generals while Mitch McConnell’s Republican Globetrotters throw down an endless series of thunderous dunks. The liberal base, weary to its bones of the Democrats’ decades of cowardice and appeasement, will respond with full-throated cheers and enthusiasm.

But above all, don’t fall for the same dishonest promises that you fell for in 2005. We’ve seen this movie before. We know how it ends. If you take their deal today, the next time a Supreme Court vacancy occurs, they’ll renege again and make you the same promise: Absolutely, Charlie Brown! You can definitely kick that football next time!

It’s time to draw a line in the sand. Stand up. Fight back. Stop letting the Republicans play you for fools and cowards. 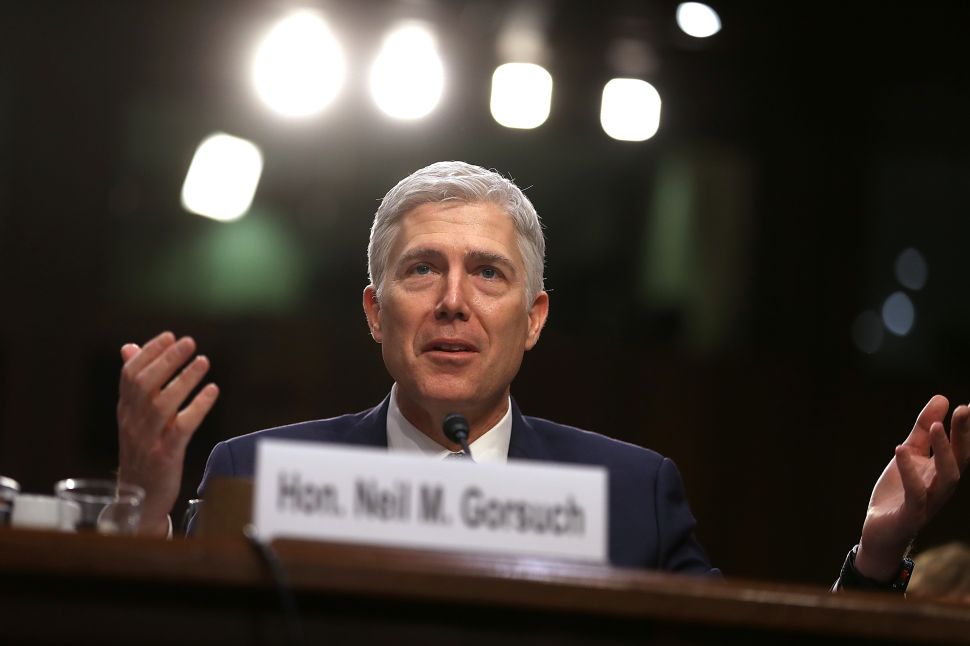