The opera the Met performed in a gala new production last night is called Der Rosenkavalier, but this performance might well have been renamed after the working title the piece had up until the eve of its 1911 world premiere: Ochs auf Lerchenau. That’s the name of the heavy of the show, a would-be Don Juan whose scheme to marry for money is foiled by his fiancée’s true love.

Usually that role is overshadowed by the grateful and sympathetic parts for women Richard Strauss and Hugo von Hofmannsthal devised for this sentimental comedy. At the Met, though, this is from beginning to end the Ochs Show, thanks to a hilarious and provocative performance by bass Günther Groissböck.

What makes Groissböck so funny is that he is, both in appearance and stage movement, a total sexy beast. The character’s obnoxious sense of entitlement for once makes perfect sense: when you look this hot, why bother to learn good manners?

Further, he sings the dauntingly long and wide-ranging part with such insouciant ease he seems to swagger vocally. The many laughs he wins derive not from any physical shortcomings—were Ochs not such a schmuck, he’d be a perfect catch—but rather from the audience’s desire to see this asshole get his comeuppance.

One definition of a star performance is that it both exceeds your wildest expectations and, paradoxically, leaves you ravenous for more. As for me, I spent most of the subway ride home from the Met dreaming of great roles I want Groissböck to sing here.

Meeting her head-on was Erin Morley as Octavian’s beloved Sophie, played for once not as a ditzy airhead but as a willful debutante, a worthy sparring partner for the witty young knight. Though her high soprano is not particularly distinctive, she darted and floated through the gossamer music with nonchalant virtuosity.

So well-cast and adept was this Rosenkavalier that it could have been one for the ages, but for the gaping vacuum at its center. In what is widely understood to be her farewell to standard opera at the Met, soprano Renée Fleming appeared as the Marschallin, Octavian’s worldly lover who nobly sets him free to find happiness with the younger Sophie.

Her voice remains ravishing, she looks beautiful onstage and she launched the opening phrase of the celebrated last act trio with a sense of timeless repose any golden-age diva might envy. But Fleming was all glossy surface; of the complex and moving character of the Marschallin she revealed next to nothing.

It’s not so much a matter of acting per se, though her repertoire of onstage affects consists of not much more than “wistful” and “morose,” but rather her failure either to color the voice or to express Hofmannsthal’s poetic text. She has been singing this part on and off for more than 20 years, but even at this late date, it sounds like a first sight-reading.

Perhaps because Fleming effectively short-circuited any sentiment in the opera, director Robert Carsen focused on the piece’s comic values. Mostly his tactic worked brilliantly: it was probably the funniest Rosenkavalier I’ve ever seen. Carsen moved the action from the libretto’s specified 18th century to just before World War I, hardening some of the details of the action to emphasize a creepy sense of decadence among the self-centered aristocracy.

Thus, the Marschallin’s breakfast in bed is delivered by a platoon of servants sufficient to overstaff Downton Abbey, and Sophie’s nouveau riche father is shown demonstrating to potential clients his stock in trade—military weapons. The downmarket inn Ochs chooses for his hookup is a full-out brothel complete with a drag queen acting acting as madam.

Carsen’s brightest idea was to envision the brothel scene as a parody of the chic boudoir from act one, suggesting that Ochs’ planned date rape and the lopsided power dynamic between the teenaged Octavian and the Marschallin, who’s old enough to be his mother, are equally disturbing.

Presumably the loud booing that greeted Carsen’s curtain call was in response to his perceived audacity, but the main fault I could find with this staging was that it seemed too restrained, as if Carsen had bigger and bolder ideas in mind but for whatever reason backed off from them.

There wasn’t much sense of “big ideas” in Sebastian Weigle’s conducting. The sound was bright and clean, like a newly-restored painting, and it was gratifying to hear so much of Strauss’s filigree orchestral detail. Mostly he kept the tempos lively, except for Fleming’s big solos, when everything lurched into slow motion. (I’ll give you one guess whose idea that was.)

As a grand sendoff for superstar Fleming, this Rosenkavalier is a major dud. But, thanks to Groissböck and Carsen, it’s also a bracing and thought-provoking take on a century-old classic. And what better reason could a thinking opera fan have for attending the Met? 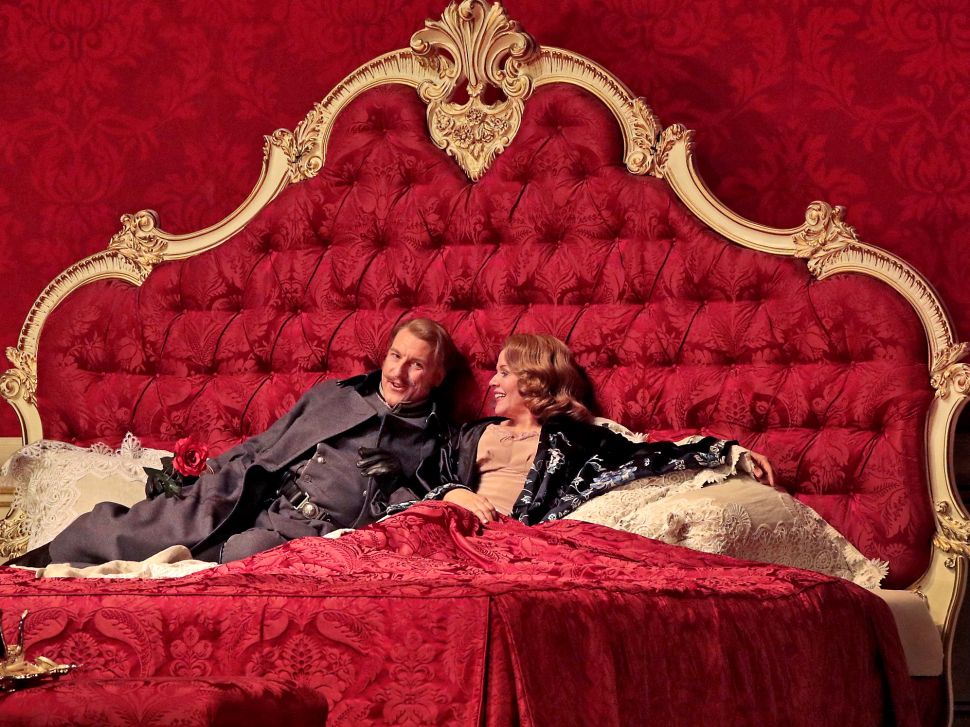