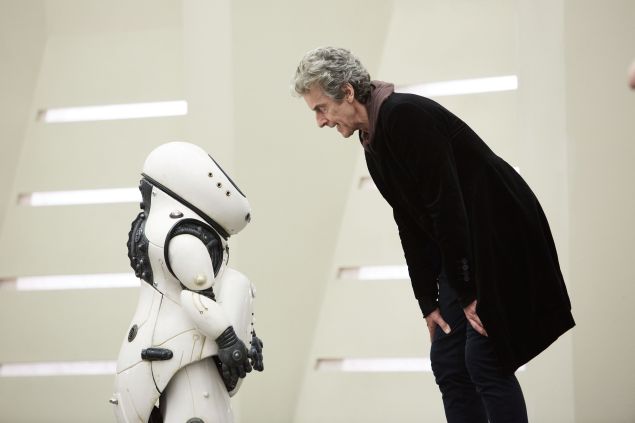 As is perhaps inevitable for a 2,000-year-old, there’s always something a bit out-of-date about the Doctor. Not only does his spaceship not look like a spaceship, it looks like a kind of phone box that hasn’t been around since the ’70s. He’s not a follower of modern trends, and he seems confused or bored when young people talk about their culture. Even his companions have often been sort of fuddy-duddyish. Living half in the past, like Amy or Clara, or just not particularly interested in the new or the now. They may have had cellphones and even texted with them, but it’s hard to imagine any of them, say, using emojis.

Enter Bill Potts. In addition to being smart, talkative, working class, and gay, we now learn that she’s a thoroughly modern young person. Landing on a new planet, her first impulse is to whip out her phone and start snapping pictures (which makes us suddenly notice how weird it is that Bill’s predecessors didn’t). And when she’s unexpectedly implanted with an in-ear communication device, rather than being troubled by the nonconsensual bodily invasiveness, instead she’s totally jazzed that she’ll never run out of phone battery again.

In fact, the whole of “Smile” seems to be engineered to expose this particular aspect of Bill’s personality, placing her and the Doctor in a world populated entirely by robots: tiny swarming nanobots called vardies, and cute squat little humanoid machines that serve as the interface for the vardies and that speak entirely in emojis.

The Doctor and Bill have landed on this world, one of the original human colonies after the evacuation of our planet, on their first real TARDIS vacation. It’s a little escape from nagging babysitter Nardole, who is trying to enforce an “oath” the Doctor took to stay on Earth. Maybe this has something to do with Clara? Or maybe with the weird vault that he’s guarding under the university? In any case, the Doctor sends Nardole out to put the kettle on, snarking on the side to Bill that with time travel, they can go anywhere and be back before the boils. (Spoiler alert: They’re not.)

Bill wants to go see if the future is happy, so they fly to a colony that was supposed to have found the key to human happiness. Suggesting once again that the TARDIS isn’t really a ship you can steer to a certain time and place so much as a wishing box that takes you where it thinks you need to be.

Turns out that the vardies have only solved the riddle of happiness in a manner of speaking: They haven’t so much been making everyone happy as they have been just eliminating everyone who was sad, swarming all over them and reducing them to piles of bones. Now the entire advance team that was meant to prepare the new planet for the colonists (the Doctor makes the same awful “skeleton crew” joke twice in one minute) has been killed and ground up into fertilizer for the colony’s vegetable garden.

Every person on the planet is issued a “mood badge,” which everyone else can see but they can’t (to avoid emotional feedback loops). The badge indicates the person’s state of mind, and the vardies are programmed to make sure anyone who is unhappy is cared for and made happy. In order to avoid dying, Bill and the Doctor have to run around the place with fake smiles plastered to their faces, and man I did not realize just how unnatural a smile looks on this version of the Doctor. You sort of want the vardies to catch onto the ruse and put him out of his obvious misery rather than have to look at that awful rictus.

The Doctor theorizes that the oldest member of the advance team passed away, and those closest to her started grieving. Grief, though, was a kind of sadness that the vardies couldn’t fix, so they evolved their programming to get rid of the unhappiness by other means, i.e. killing all the sad people. But this of course caused more of the colonists to grieve, so they were also killed in turn. And so on, all of them dying in a single day.

This central theme—happiness as the forced elimination of sadness—is interesting, particularly as it relates to our idealism about new technology, or the relentlessly positive echo chambers of social media (why do you think there’s no “dislike” button?). But it was telegraphed so heavily, and is already such well-trodden territory for science fiction, that it got boring long before the Doctor and Bill puzzled it all out. Until the rather clever twists toward the end, it felt like just a lot of going through the motions.

Believing that the main ships of refugees from Earth are on their way and will be landing them right into a genocide, the Doctor resolves to blow up the building, killing all of the vardies, which make up its walls. But right before he does so, Bill discovers he’s wrong: The colonists are all already there, in cryogenic suspension. And now they’ve accidentally woken them up early. All of humanity is about to emerge into a world whose inhabitants will murder them if they show the slightest bit of sadness.

For some reason, the first few humans to wake up decide their best course of action is to shoot at the microscopic robots with guns, which is about as effective as you’d imagine. A favorite theme of the Doctor’s is how dumb guns are and how dumb they make the humans who wield them. But instead of ranting on as usual, he rolls his eyes a little and puts a stop to the whole thing by giving the vardies a hard reboot (he explains the process, which Bill paraphrases cheerfully as “He turned them off and turned them back on again.”)

Then comes the final kicker: The vardies are now blank slates, all memories and programming erased. Which means no more murderbots, but also no more dedicated servants of humanity. For all intents and purposes, the vardies are now the indigenous species of the planet, and the humans are new settlers invading their territory. The Doctor offers his services as a peace negotiator as the humans gape at the enormity of their new situation.

This is a return to another of Steven Moffat’s favorite images: The Doctor mediating between species who are forced to share worlds, most familiar from the Zygon treaty that began in “The Day of the Doctor.” This whole episode, in fact (though it was not penned by him), is packed with references and callbacks to classic Moffat tropes. We’ve got the swarming monster hiding in the walls that reduces you to bone, just like the vashta nerada in “Silence in the Library.” A one-word title that tells you what to do (or in the case of “Blink,” what not to do) if you want to live. Machines that over-interpret their mandate to fix things, like the clockwork droids from “The Girl in the Fireplace.” Spaceships built into unlikely places. Cute creatures that reveal hidden horrors. Things that aren’t there unless you’re not looking at them. And on and on. It’s fun, but it all makes me a bit leery that this whole season may end up being a bit too much of a farewell tour for the outgoing showrunner.

Mischief managed, Bill and the Doctor jump into the TARDIS to fly back and trick Nardole into thinking they’ve only been gone as long as it took him to make tea. But they overshoot by about 200 years, ending up face to face with an elephant walking on the frozen Thames, placing them (if I and Wikipedia are not mistaken) at the London Frost Fair of 1814. Bring on the top hats and empire waists! 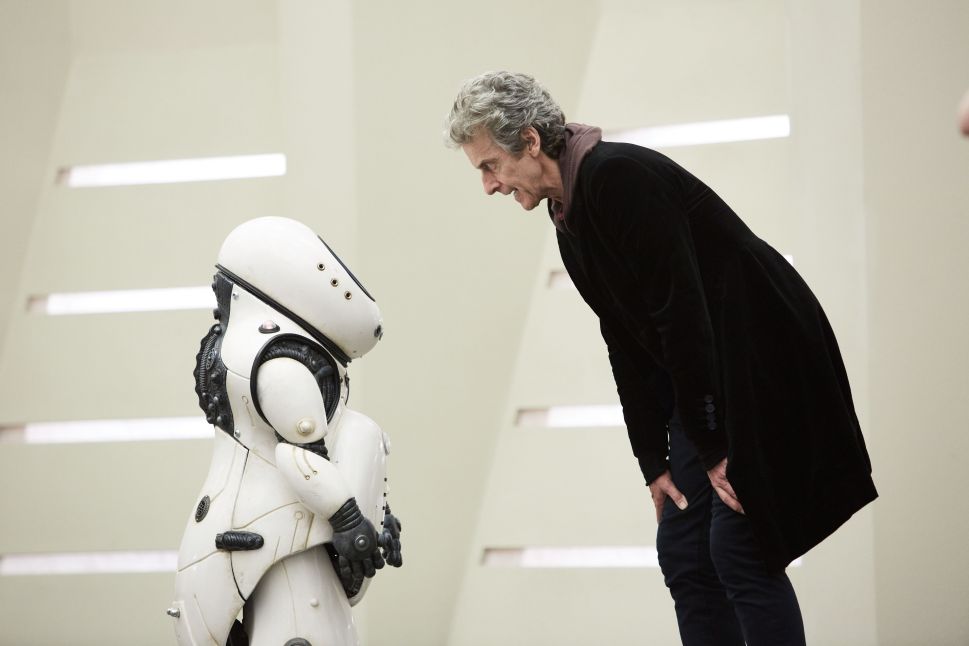