The Doctor has always had a fondness for people on the fringes of society—and this particular incarnation, with his magician’s cloak, is drawn to thieves, especially those of the performative variety: pickpockets, con men, mountebanks, snake oil salesmen. So of course he feels right at home at a fair in 1814 London, where he and Bill meet several cheats and charlatans very quickly. The fake smiles of last episode give way to genuine ones, as the Doctor seems to truly be enjoying himself for the first time in a long time.

Having a new pupil to usher into the ways of time travel, though, the Doctor gleefully slips the bounds of his promise, and now he’s like an (old, top-hatted) kid in a candy shop as they traipse around the last great Thames Frost Fair on the last day before the thaw (have you ever noticed just how many episodes of Doctor Who take place on the very last day of some important happening?) meeting all sorts of swindlers and tricksters and generally having a rollicking time.

Bill is initially apprehensive about it all: about travel to the past, lest she butterfly-effect up her present; about being a black woman in a less-enlightened century; about walking on the surface of the Thames. But with the support of both the Doctor’s reassurances and a very thick layer of ice, she relaxes, especially once she notices that Regency London is a much richer racial tapestry than she had expected.

They roll merrily along, being happily swindled and pickpocketed, until one of the impossibly photogenic street urchins who grabs the Doctor’s sonic screwdriver gets pulled under the ice by mysterious swirling green lights. In his apparent lack of sympathy—mourning, after all, is a waste of time when he can swing into action and prevent it from happening again—Bill sees the Doctor’s alien face for the first time, and it terrifies her. An initiation rite every companion must undergo, but few have pulled it off with such deeply felt emotion as Pearl Mackie, who is sterling in this scene.

The urchin kids are “living rough”—a direct reference to “The Empty Child,” and thus the next stop on this season’s irritating farewell tour of Steven Moffatt’s greatest hits. (Later they are confronted with a gigantic eyeball right out of “The Eleventh Hour.”) The Doctor reveals his talent for entertaining children and so insinuates himself back into Bill’s good graces, and then they’re off to don 19th century diving suits and investigate what’s happening underneath the ice.

Turns out the Frost Fair isn’t just home to con artists—it’s all one big, murderous con. A wealthy steel family named Sutcliffe has kept a gigantic fish chained under the Thames for centuries; when it eats people, it excretes a substance that burns thousands of times hotter and longer than coal. Periodically the creature freezes the surface of the river, and the Sutcliffes capitalize on it by holding fairs, luring people out onto the ice as food for the giant fish, giving them a bonanza of fuel for their steel mills. The latest Lord Sutcliffe has really gone all-out this time, even hiring an elephant to perform. The huge crowds that gather will be an enormous windfall for him, once he blows up the ice and feeds the creature thousands of bodies.

They track the clues to Sutcliffe’s manor, where the Doctor warns Bill to keep her temper in check. But all diplomacy flies out the window in the face of Sutcliffe’s ugly and casual racism toward Bill, and the Doctor quite satisfyingly decks the man. Satisfying but reckless: Now Sutcliffe knows they’re onto him, so he moves up his plans—he’ll just blast the ice right now, in broad daylight, killing huge crowds, and our chained-up heroes.

A little sonic screwdriver jiggery-pokery frees them, and then they have a decision to make: Free the giant sea creature and run the risk of it eating more people, or leave it trapped and suffering, possibly to be exploited by some new evil capitalist down the line. The Doctor designates Bill as representative of Earth to make the call for the whole of humanity, claiming that he, as an alien, only serves “at the pleasure of the human race.”

I love the dramatic terms of scenes like this, which pop up now and then on Doctor Who, “Kill the Moon” being a recent example: one or a few people as a microcosm of humanity, empowered to decide whether we are essentially good or bad, brave or cowardly. But it also is wildly inconsistent, plot-wise. The Doctor is constantly making decisions that impact all of humanity, many of them moral calls. So when he suddenly pauses to give the reins to a single human, it feels less like his responsible position vis-à-vis our planet, and more like a rather cruel test of his companion’s ethics.

A test that Bill passes, agreeing to free the creature with the hope that it (or “she”—for some reason they’ve decided the fish is female) will simply thank them and swim off to colder climes. Bill and the urchins try to usher everyone off the ice, so Sutcliffe pushes the button prematurely, thinking he’ll at least salvage some of his plan. But the Doctor has re-rigged the explosives to free the fish instead, and it swims away, leaving Sutcliffe to fall into the rapidly cracking ice.

The Doctor continues his streak of trickery by forging a will that leaves Sutcliffe’s fortune to the street kids, and then he and Bill wing it back to the present just in time for Nardole to serve the tea he toddled off to make at the start of the last episode. But they’re still in their 1814 clothes, so not really fooling anyone. Nanny Nardole scolds, and the Doctor uses one last trick—a coin toss ruse he learned on the ice—to get his warden to leave him alone. So Nardole fumes back to the vault, where whatever is inside has started knocking ominously.

All in all, a light, fun episode, with a an effective bit of a dig at the evils of capitalism, but mostly just an extended riff on the idea of a “big fish story.” Which Bill learns the hard way when she gets home and realizes that no matter what she saw in the past, nothing has really changed in the present. If anyone noticed a mile-long sea creature swimming its way down the Thames in 1814, it has made its way into the annals of myth rather than those of history. Like every fish story, it’s just a story in the end. 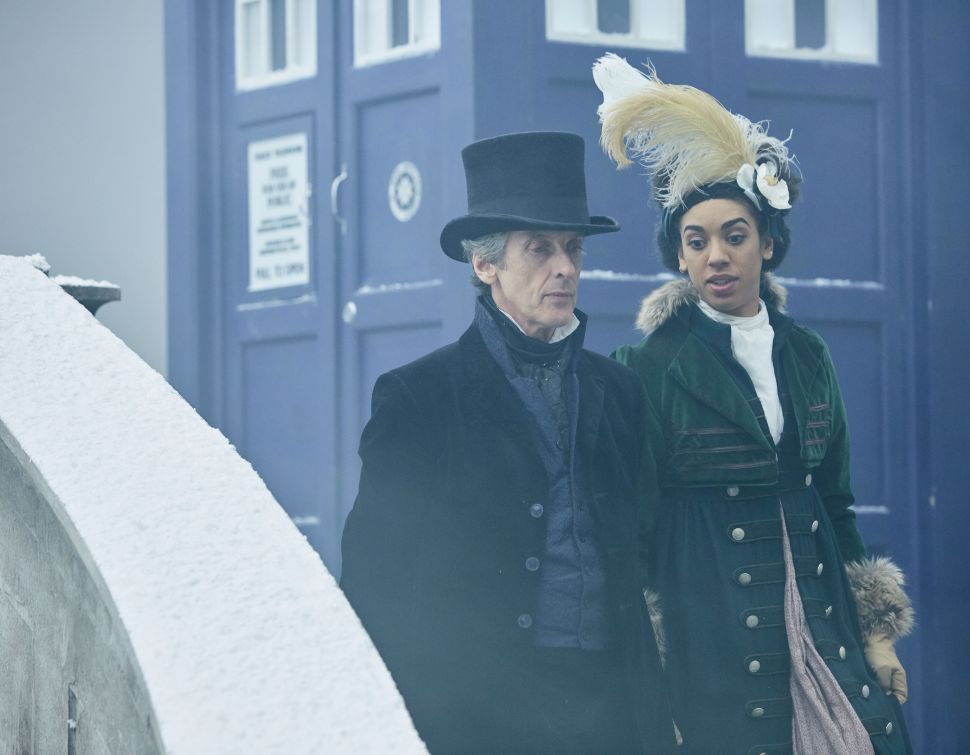