It starts with a seed.

No single person is going to fix the world’s food-supply and food-inequality issues, but Hamptons farmer Frank Trentacoste understands that it’s important to get your hands dirty and do what you can.

So Trentacoste’s Bhumi Farms in Amagansett has announced that it’s becoming a completely donor-based, not-for-profit enterprise. It will give away nearly all of its organic produce, thousands of pounds each year, to organizations that are dedicated to fighting hunger. Trentacoste will start by providing food to New York Common Pantry and The Bronx’s POTS.

Like a public-radio statio, Bhumi Farms is looking for donors to support its efforts. Those who donate can receive farm-share boxes or other incentives, like a private dinner at the farm, but Trentacoste also hopes that some will pledge money simply to give those in need access to nourishing food free of GMOs, pesticides and fungicides.

“I was feeling like food policy in the U.S. was terrible and about special interests,” he says. “A lot of issues are tied to poor food quality, including children’s health.”

Trentacoste’s goal is to grow food for mass consumption, so he’s focusing on crops like greens, carrots, beets, zucchini, cucumbers, tomatoes and peppers. He used to grow more esoteric produce like kohlrabi, but he’s got a different mission now.

Trentacoste clearly realizes that “higher-quality food is more expensive and out of reach” for a large part of the population, so he’s doing what he can to equalize things.

Bhumi Farms is, of course, not alone in this movement of providing better food to a wider audience. San Francisco’s Free Farm Stand has given away more than 28 tons of produce. Sprout City Farms has pay-what-you-can farmstands in Colorado.

Prominent chefs all over the country are doing their part, too. In Philadelphia, Michael Solomonov’s Rooster Soup Co., which was just named one of GQ’s 10 Best New Restaurants of 2017, serves broth made with spare chicken parts from Federal Donuts and uses 100 percent of its profits to provide food and other support to the needy. Roy Choi and Daniel Patterson opened Locol in L.A.’s Watts to give an underserved community access to better fast food. Italy’s Massimo Bottura, widely considered one of the world’s best chefs, has plans to open Food for Soul community kitchens in the United States and has scouted locations including The Bronx. Daniel Humm’s Nomad Truck has been selling chicken burgers created by different L.A. star chefs and donating the proceeds from those burgers to charities.

Trentacoste, though, made his decision independently. He spends a lot of time alone, he says, so he was mainly influenced by what was going on in his own head.

“I was just looking at the historical context of food,” he says. “People would come to your door, and you would feed them. This is a modern take on the old act of feeding people. Even though you’re not feeding somebody at your table, you can still feed them.”

Trentacoste left his job as a New York City financial analyst in 2012 because he wanted to feel more connected to the world.

“A lot of New Yorkers try to be spiritual and try to connect and reconnect, but they don’t talk to the person next to them in the subway,” he says. “You go to a bar because you don’t want to be alone, but you only talk to the person you went to the bar with.”

Plus, Trentacoste was sitting at a desk all day, trying to maximize returns for faceless shareholders. Like so many New Yorkers, he would eat breakfast and lunch at his desk in a hurry.

So he decided to put his hands in the soil, to slow things down a bit. He started with 2 acres, quickly expanded and now has settled into a comfort zone of growing crops on about 10 acres. Instead of looking at “a million things at once blinking up on your Bloomberg screen” Trentacoste now finds peace starting at plants.

“You can look at a plant, and it doesn’t look like it’s changing,” Trentacoste says.

Nature is about patience. Give nature enough time and something wonderful will bloom.

Even though he’s often by himself on the farm, Trentacoste knows he’s growing something that will better somebody else’s existence. So he doesn’t struggle with loneliness or feel lost the way he did in Manhattan.

His finance background, his understanding of how to analyze situations, helps him at Bhumi Farms.

“I’m big on efficiency: I want everyone to get access to the food, but I want them to get access to it efficiently,” says Trentacoste, who adds, somewhat jokingly, that he’s “half capitalist, half socialist.”

He found nonprofit groups that have a proven track record of distributing food in large quantities. Both NY Common Pantry and POTS were vetted by the Robin Hood Foundation, which works with more than 200 New York City nonprofits.

Feeding people, Trentacoste stresses, is just part of this.

“These nonprofits are also focused on ending the cycle: programs to help people get stabilized, to get them out of poverty,” he says.

In many ways, running a farm that’s also a social enterprise suits Trentacoste better than being in finance.

“I never had that killer instinct because I didn’t want to squash anyone or get rich,” he says.

He doesn’t have to spend much time fixating on numbers anymore. He’s not sure if it’s more appropriate to track the pounds or the calories of food he donates each year. And how do you compare the value of a crate of kale to the value of a much heavier crate of zucchini? These are things he thinks about, no doubt, but he doesn’t stress out about them.

When I ask Trentacoste his age, he has to think for a moment about what the correct answer is. Actually, I have to help him figure out the answer. He tells me what year he was born. I ask when his birthday is. He turned 44 last August. He hesitated giving me an answer because he doesn’t ever think about how old he is.

But when you’re alone on a farm with your tractor, you don’t sweat social conventions. Instead, you think about things like how your farm and what it represents extends far beyond your acreage. You’re fortified by a belief that wealthy people who can afford organic food would want to give other people access to the same high-quality food.

“My base case is that people are good and people are empathetic,” Trentacoste says. “If I’m right on these two things, I think this model should work. And it’s something I want to expand to other cities.” 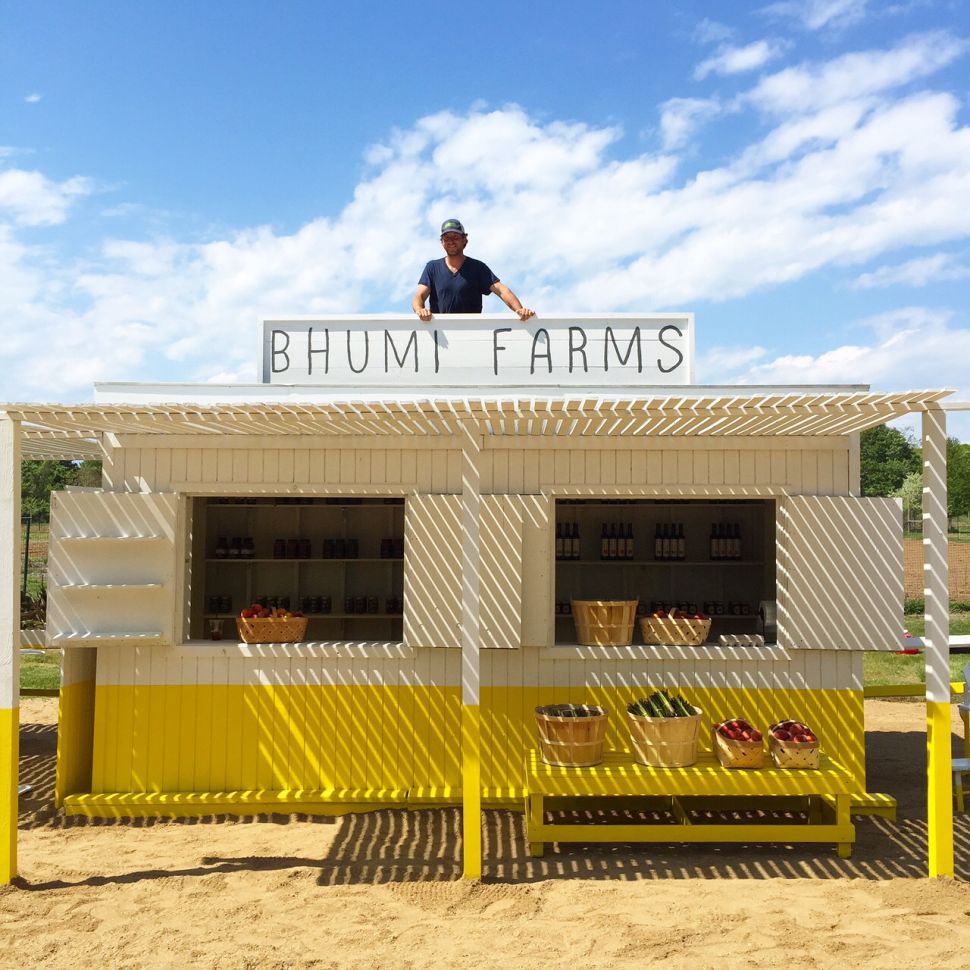