Future historians will remember 2017 as the year of the centennial.

In jazz alone there’s Dizzy Gillespie (October 31), Thelonious Monk (October 10), and Buddy Rich (September 30), whose 100th birthdays will continue to be celebrated in every village and hamlet. But make no mistake, the big one is that of Ella Fitzgerald, who would have turned 100 on April 25.

Fitzgerald’s legacy is vast and affects many different areas of music, and touches on questions that are still being asked: What is the place of the human voice in jazz? How do we define the Great American Songbook? And exactly what is the difference between a jazz singer and a pop singer? It’s because of the capaciousness of her contribution to music that we need as many centennial events as possible.

Last October, the Apollo Theater mounted one of the best centennial tribute concerts that I’ve ever experienced—which isn’t saying much, since most such shows (i.e., both of the major televised Sinatra 100 concerts two years ago) tend to be all-star train wrecks.

But this concert was different. A well thought out show produced by drummer Gregg Fields, the Apollo provided its well-chosen star singers with both a string section and the full Count Basie Orchestra. The always effervescent Patti Austin and Monica Mancini lived up to expectations, but the real surprises were the re-emerging Lizz Wright (if it had been a competition, she would have won first prize) and actor Kevin Spacey, who is infinitely more palatable when he’s not trying recreate Bobby Darin. (Somehow no one pointed out that this was a Spacey-Basie show.)

Now that Ella’s actual birthday is upon us, the next up to the plate is Birdland—the current day heir to a club where Fitzgerald herself headlined frequently.

The storied venue is providing a full two weeks of Ella 100 events, built around Ann Hampton Callaway (April 18-22) and Jane Monheit (April 25-29) two female vocal headliners who both possess the technical acumen and rich voices (which is another way of saying pure “chops”) necessary to channel the First Lady of Song.

Of the two, Callaway (who released her excellent tribute album, To Ella With Love, in 1996, the same year that Fitzgerald left us) is the more experienced artist with the considerably greater emotional resources. Still, Monheit has just released her own The Songbook Sessions: Ella Fitzgerald, which is full of imaginative arrangements (including an unexpectedly distended “Ill Wind”), always sung marvelously if not always profoundly. Both shows feature first-rate instrumental guest stars, pianist Matt Baker with Callaway and trumpeter Nicholas Payton with Monheit.

Fitzgerald also appeared at Lincoln Center; I saw her at the former Avery Fisher Hall in about 1991, just about the time that the Jazz division was starting to get its act together, during one of the Great Lady’s final tours.

For the following three nights from April 27 to April 29, Gambarini and Washington return in a formal concert with Wynton Marsalis and the full Jazz at Lincoln Center Orchestra for “Celebrating Ella.” (A third JALC Ella event, hosted by Michael Feinstein, plays three shows on June 7 and 8.)

But that’s hardly the end of the Ella-bration in Manhattan.

On April 24, the brilliant contemporary jazz singer Dee Dee Bridgewater participates in a talk and performance to honor the centennial at the WNYC Greene Space.

Many blocks uptown and a few weeks later, two excellent young singers, Brianna Thomas and Michael Mwenso, will offer their delightfully irreverent take on the legendary Ella Fitzgerald – Louis Armstrong duets at the National Jazz Museum in Harlem on May 16.

Those legendary duets are also the subject of a new four-CD box (collecting all their appearances together for the first time), coming in June, which is merely one of many centennial releases from Verve Records and Universal Music. (These deserve an article unto themselves, but there’s going to be a “new” recording that features Fitzgerald’s vocal tracks backed by the London Symphony Orchestra, a deluxe vinyl edition of the 1959 Ella Fitzgerald Sings The George & Ira Gershwin Song Book, and a 40-plus CD megabox titled Ella Fitzgerald: The Complete Decca and Verve Albums.)

Are you thinking that this is possibly too much ado about Ella? Hardly. In fact, every club in the city should be honoring Ella Fitzgerald; every vocalist who raises voice in song should be singing her praises from the highest hills. 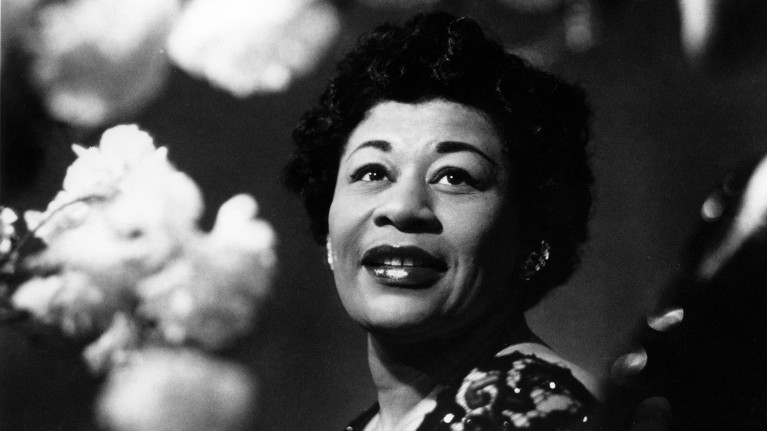