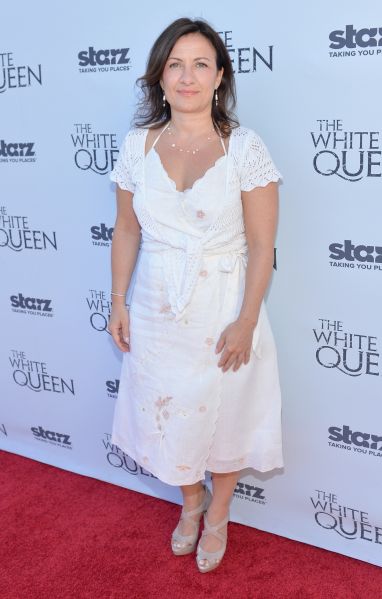 Tales of gluttonous, amorous King Henry VIII and his six wives (one less than Larry King) saturate movie and TV archives. But who knew about the trials of his mother, Elizabeth of York? Starz’s gripping new mini-series The White Princess, premiering Sunday, highlights the young woman (Jodie Comer) who rose from pawn to Queen of England beside Henry VII during the War of the Roses.

Showrunner-writer-executive producer Emma Frost, having adapted this juicy sequel to The White Queen from Philippa Gregory’s bestseller, sat down with the Observer at Marta in Manhattan to discuss the show and her recent move from London to Los Angeles. She pauses only to wave across the restaurant at the young Australian actor Jacob Collins-Levy who flashes a twinkly smile rarely seen in his embattled King Henry VII who tends toward the broody stylings of the Kings of the North played by Kit Harrington and Richard Madden.

Observer: You’re trading London for Los Angeles. How does the British system differ from the Hollywood situation?

Emma Frost: The British system is incredibly different to the American system. In the UK, TV writers are the same as feature writers here. We don’t have a showrunner system. Writing and producing are completely separate. There is a creative apartheid between the two. In the UK, writers basically write at home in their pajamas and somebody else is the de facto adult who takes the script and says, okay, back to the sandpit and I’ll go over here and make the decisions. It’s changing slowly but for someone like me, it’s an incredibly difficult system to work within because I was a script editor. I worked in production. I was a producer before I was a writer. I’m naturally someone who wants to be in charge and make those decisions and organize and lead and suddenly you’re infantilized because you’re told just write the script. “Now, there, there, little girl, off you go back to your little nice box of paints and sandpits and bring me another script.” 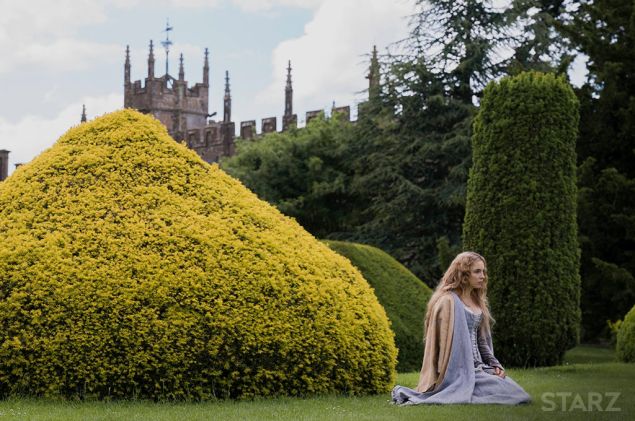 Jodie Comer as Princess Elizabeth in The White Princess. Starz

Now, with The White Princess, are you running the playground?

Yes. The White Princess is the first show I fully show-run. The White Queen was commissioned by the BBC and done in the British system. Starz came in later. So, the future is very much show-running, creating shows, generating material. And then also, I’m writing movies. So, I’ve just written Zelda for Jennifer Lawrence. Ron Howard is going to direct. So, exciting!

Intimidating, too, working with Lawrence?

When you sit in the four walls with your computer and it’s just your brain and the blinking cursor, that’s the same whether you’re writing a stage play or a multimillion-dollar budget movie. I go, all right, what did Zelda Fitzgerald feel and what did she do in this moment or what might she have felt? The integrity of the work is an equalizer. So, I don’t feel afraid. I feel privileged.

One link between these female-driven projects is that they’re biographical fiction. Whether it’s F. Scott Fitzgerald’s wife or the 15th-century queen, there are historical expectations.

The White Princess is based on Philippa’s novel. Gregory is first and foremost a historian. She intricately, meticulously researches everything. In this period the women’s lives are barely recorded. There’s not much known about them. Nobody really cares. So, Philippa finds the information she can find and then brings her own dollop of poetic license to turn it into a novel. 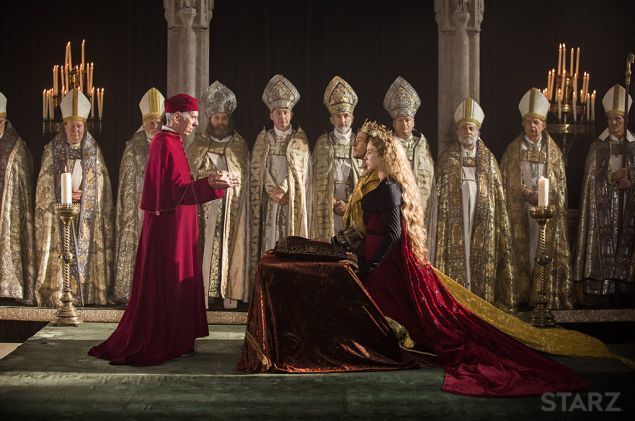 Central to historical fiction is that leap of faith from the facts to elements that can be opaque in surviving primary sources: feelings, motives, desire.

Of course, but also you have to invent because we’re not in the business of trying to be historians or deliver a history lesson or make a documentary. There’s a leap you have to make to make it relevant for a 21st-century audience, in particular, 21st-century female audience. You have to blow life into the story and ask: What would they have felt and dreamt? What were the conflicts?  The fact that it’s based on history is to some extent irrelevant because I just go: what is this story that’s here and how do I turn that story into a good show?

And that show puts female historical figures front and center.

What excites me is that history is the story of men. I mean, it’s the victors that write the history and the victors are pretty much always privileged, largely white men. And I think the history books tell you more about the period in which the book is written and the person writing the book than it does about the period it purports to represent. So, there is this constant filtering of all the people who are in power and what is deemed interesting and relevant.

“History tells you it’s a litany of white men fighting wars so to be able to go back and dig into those female characters, and pull their stories into the light…that’s thrilling.”

Do those power struggles have contemporary relevance?

Yes. Telling stories about women and their relationship to power and to owning their own lives has never been more relevant than it is now because of the current political landscape where women are under attack and losing power, losing our rights.

And, yet, the story of Princess Elizabeth and her conflicts with her mother and mother-in-law doesn’t epitomize ‘sisterhood is powerful.’

People talk about the sisterhood and I’m always very suspicious of the idea that women support each other and try to help each other. Even my experience of the 21st-century is that a female boss will more likely employ men and kick other women back down the ladder. That’s unfortunate but it does happen. I find the ways in which women compete and come into conflict with each other fascinating. 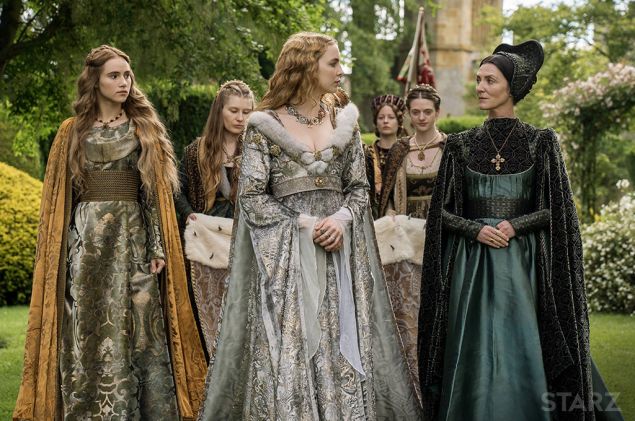 The cliché of women is that we are nurturers and that we always love our children, we always love our mother, and that sisters are sisters. The reality, of course, is more complicated. I’m interested in looking at those times when actually your mother is not someone you especially like or your child is not someone you especially like and you want different things. And also in women’s relationship to violence, women’s relationship to even death or murder, that we are not necessarily this nurturing, warm gender. We are just as capable of men of being ruthless and fighting.

“I think it’s important to give a female character that. Anger is really important. Anger defines boundaries and I think women are not entitled to their own anger.”

Often – both in fiction and on the street – women are expected to smile despite their true emotions. And Princess Elizabeth, a.k.a Lizzie, is pissed off from Episode One.

Lizzie has nothing to smile about at the beginning and also, she’s unapologetic. She’s entitled. She was born royal. She had a set of expectations about her life, and she’s very sure of who she is, and what she wants. Suddenly, she finds herself in a situation she never thought she would be where her own mother is asking her to marry the son of the woman that they believe murdered her brother. What a betrayal from her mother, something she never thought would happen. She’s completely outraged because nothing in her life before this ever led her to believe that she would be in this position. She never thought her mother would put her here.

And Lizzie, in part because she’s so entitled, owns her anger.

She is so sure of her own position at the beginning and she’s like “why the fuck should I?” So, she’s angry and I think it’s important to give a female character that. Anger is really important. Anger defines boundaries and I think women are not entitled to their own anger. As you say, women are supposed to smile. We’re not supposed to be angry. We’re supposed to be nurturing. I hope that the show explores all those other spaces, which are non-nurturing, potentially murderous, hugely competitive, power hungry, angry and unapologetic.

And this rage doesn’t stop with Lizzie: her mother Elizabeth and her mother-in-law Margaret are total tiger moms.

Elizabeth and Margaret are mothers who feed off their own children for different reasons. Do they want the best for their kids, or do they want for their kids to do what they would want for themselves so therefore they can live it vicariously? They’re kind of both stage door moms in a way, aren’t they, or soccer moms? Lizzie and her mom, they really do love each other.

But that doesn’t keep Mum from plotting behind her daughter’s back.

It’s a very interesting journey between those two. They love each other right through to the end but there’s a truth about the pain in those relationships. Mothers and daughters anger each other endlessly. And yet, in the media and on TV, I still think that the bandwidth female characters are allowed to inhabit is so narrow and so restricted because it is supposed to be you’re a woman, therefore by definition you love your children and you would do anything for your children. Is that true?  I don’t think it is true. There’s a tussle for status and identity that happens that this show feeds into.

Would you say that the power struggle among women is the show’s primary focus?

I think the show is a period The West Wing in a way because it’s all about the subtleties of pulling this way and that way and how you manipulate. And poor King Henry is like the wishbone in a chicken being fought over between Lizzie and his mother.

Are these lessons of palace intrigue lessons applicable to your career?

In life — and in this business particularly — the odds are against you being female. You have to find a different set of strategies not just for success, but for survival. In the show, there’s a lot of female characters understanding they can’t just go, hey, I’m in charge and I’m doing this and you’re just obeying. You have to find different strategies to play the game, to not alienate, to not make men feel that you’re this gigantic threat….A lot of my own career struggles are things that play out through this show as well. That you understand, as Lizzie says, to be “hidden and patient.”  You have to play along with the game. You have to figure out ways to be smart and ambitious but not too smart and ambitious on the face of it because then people find you a threat. Coming up through the industry I think it was much more sexist when I first came into it. But you sort of just have to play the game well.

As you become increasingly successful as a show-runner and screenwriter, what’s your advice to women coming up? 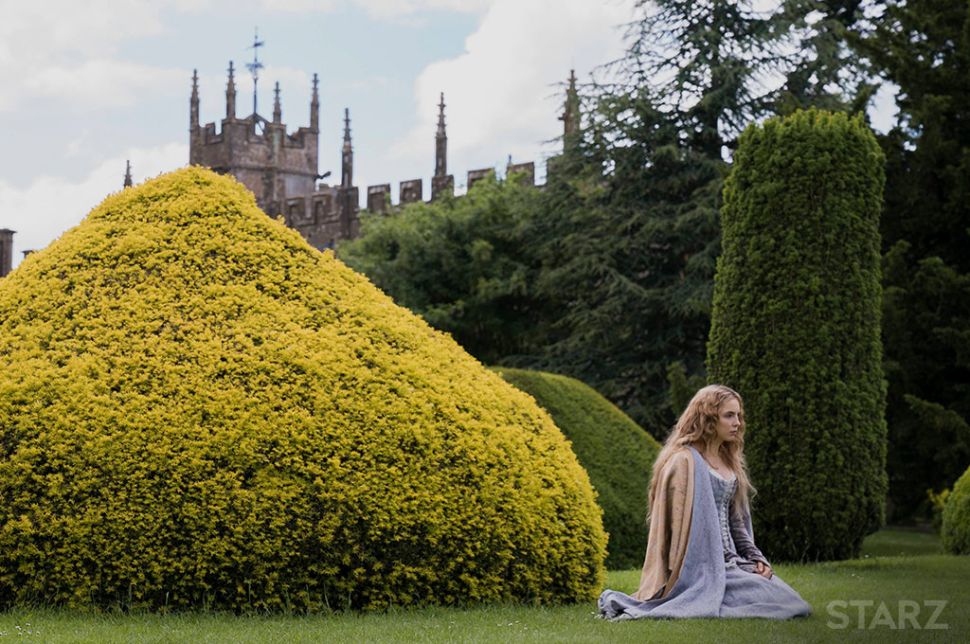