I haven’t left any call to action to my website because this article is only meant to serve two things, swift justice and a lesson for all of us.

Also, my sarcasm game is strong here. It will be hella entertaining.

So, grab the popcorn.

Over the last year, I’ve written about 25 articles on Medium. That’s not a lot compared to people that write up to 100, but still decent.

On December 26, 2016, I wrote a piece 13 Things You Should Give Up If You Want To Be Successful, which was my experiment to see if I can hack certain elements to make an article go viral within nine months.

It worked, but I had a lot of luck in the process.

The article went viral and generated over 20 million views (and other things not relevant here).

As usual people would republish it under their own name, majority of them would give credits, but some didn’t. That’s why I had a failsafe (backlink mentioned in one of the points > to my website).

So every time someone would steal it, I would get a notification about it.

Or one of my readers would send me a message or an email, informing me who stole the article (which I am truly grateful for!)

In the majority of cases, I let it go because the cost of pursuing copyright infringement on Facebook / LinkedIn and other platforms are lengthy and time-consuming.

Plus, more people can read the article this way. So I go with it.

Out of probably 40 people that stole it, I reported 8.

Which leads me to present moment.

On Sunday at 4 AM, I was writing down some ideas on my phone, because I couldn’t sleep, and see a notification from Benjamin P. Hardy. He tagged me in a comment on someone’s viral article on Facebook, saying:

Interestingly I have seen him before, but I haven’t noticed the date. Luckily Benjamin spotted it, and informed me.

First, the lizard part of my brain kicked in, like is it possible that I’ve read this piece somewhere, and replicated it to the exact point, without remembering it?

Then the Captain Obvious part of me followed up, and I decided to give myself more credit:

“Dude, you wrote this article, he must have changed the copy of one of his previously published articles. That’s how the date remained”

Now, I don’t think Mike (the guy behind it), or Mikey as I call him now, is an evil mastermind (or any kind of a mastermind to be honest), that wanted to claim ownership over my article, and legally sue me. No.

This brilliance was a random by-product of his laziness.

You see, he only has one article/landing page on the website. And then he changes the copy every once in a while.

In November, he published “How a 22-year-old runs a $100,000-a-month business while traveling the world,” which got him a lot of traction because of how clickbaity it sounds (my bet that he slapped this article, on top of something else as well).

And then, when my article exploded, he just slapped that one on the top of his.

All of this was just a theory, so I decided to do research.

Other than the date of publishing (December 26th), the fact that I know every word by heart and that I can explain why each point goes in that specific order, with those specific quotes, I couldn’t prove that its mine, because his article was published in 2015.

On 5 AM on Sunday, after initial frustration, I started doing research and soon enough found a variety of discrepancies, and finally, a proof that I wrote it first, and that he manipulated the loophole, worry not, I have screenshots.

Before you go on, know that at the bottom of this post I will give full details on Mikey, his social media accounts and links to his ventures.

Who knows, maybe someone who is reading this can recognize their piece of content on his page.

I decided to reach out to him, to give him a chance to explain and take everything down, before I publically or legally pursue him (you can see the message below).

But it is very hard to get in touch with him. You usually get auto-responders. I tried on Facebook, Instagram, and email.

I apologize, sir; I didn’t know I was in the presence of Elon Musk or Mark Zuckerberg. And not the person that built 90% of his traffic in the last two months because of my article. My bad.

I continued my research, Google Trend on his full name and mine, to see if that can tell me anything. And it did. You can see that on December 26th my name appeared and started rising because of the article, and then he published his after that.

Plus, I looked more into the legal part of this, looking at Facebook policy for copyright infringement, and found a way to ban his post legally.

Before doing that, I waited for him to respond for several hours, he didn’t, so I filled out a form on Facebook.

At this same time, I was monitoring his website with my article, to see if he would change anything.

Soon enough. He did.

1. The first screenshot, shows you his only article on the website, that he uses as a landing page. Which was published in 2015, but he updated it with the new article from November.

2. The second screenshot shows you how he slapped my article on top of his existing article/landing page. Changed the headline, and instead of keeping the explanation of the points, he just randomly placed pictures of him traveling.

And this is where my proof came from. Look at the Title of the article on the 4th tab. It’s still the same article he previously published.

And if you look at Buzz Sumo, you will see that the republishing happened on January 8th, about two weeks after my article went viral.

When I sent him a message, instead of answering, what Mikey did, was to change the headline & slug, but without altering his SEO.

Look at this screenshot:

3. And finally, he changed the date of publishing to April 8th, plus the quote and rephrased my points (Update: later on the article was fully removed.)

Instead of like I asked in the email to remove any trace of my article whatsoever, and if he doesn’t, I will publish this case study, for the world to see.

I wrote this on Sunday, but I decided to sleep on it and see if I feel like posting it.

In the meantime, Mikey reached out to me and signed his message like this:

“Mike V.
The guy that was an asshole and did not double check his virtual assistants content before publishing it on Facebook.”

Honest mistake. He most likely hasn’t noticed that his Facebook page has been exploding with notifications for two months. Remember (25k likes, 16.4k shares, 1.2k comments).

I mean, anyone can miss that.

But sure, virtual assistant. Who knows if she is even real (I see dead VA’s — nope, I don’t regret this joke)

Now, instead of truly owning up to his mistakes, he deflected the responsibility to her (she will not be named), and told me that he would buy me a beer if I am in Thailand to make it up to me.

An entire beer! Fair trade I have to say.

This is what I told Mikey:

And this is the email I sent him a while back:

The conclusion is simple, he stole my article and found a loophole that not only damages my intellectual property but also jeopardizes the validity of my past and future actions.

I think people who dodge their responsibilities like our friend Mikey, should be made into an example.

So, here are full details on Mikey:

Now, I know that you might be asking yourself:

But why did I do this so publicly?

The reason is simple.

I want to make a statement about guys like Mikey.

First, taking another person’s work and positioning it as your own, without credit, is theft.

Secondly, he randomly found a loophole that other people can use to damage anyone who writes anything online. Maybe he didn’t realize the possible danger of it, but I sure do.

Thirdly, because he calls himself a superhero entrepreneur that puts on a cape to save the world.” — ‘you can insert sarcastic comment here.’

Finally, because he is supposed to be a role model to teenagers and young adults.

Plus, to give them the tools, that will help them achieve that.

But no, Mikey indulged in one of the deadly sins, GREED. Bad move Mikey, bad move;

If I had let this guy get away with it, he could not only damage his followers, with unproven and scammy content.

But the loophole he used, can be used by others, and get mine, and your intellectual property in danger.

Plus, I don’t think Mikey will complain because I can legally ask that he gives me invoice receipts for the last two months and data from his Facebook traffic.

Who knows, maybe I earned some money too.

Plus, I’ve checked legal ramifications of writing this post, and there are none.

This should be a lesson to me, you and Mikey.

Instead of creating their work, more and more people are scamming and stealing other people’s work.

Which means that eventually, you might be in danger as well, or something you created. So take action, spread the word, and protect your intellectual property.

And don’t forget to point out people who are doing things like this.

The worst thing we can do is let them slide.

Zdravko Cvijetic, is an educator, and an entrepreneur, with a B.A. in Adult Education & Lifelong Learning. He is the founder of Zero To Skill, a platform which provides useful content on how to become a top-performer in life and build a personal brand. If you enjoyed his article, don’t forget to get his free e-book: The Ultimate Productivity Cheat Sheet. This article originally appeared on Medium.

I was on my break from writing, so I decided to checkout what is Mikey up to. And turns out he blocked me.

Maybe you are not on his shit-list, and you feel like doing some justice today, here’s a link to Mikey’s post.

Turns out that I wasn’t the first person that started paying more attention to our budy Mikey. Thank you Adela Paun for the link. 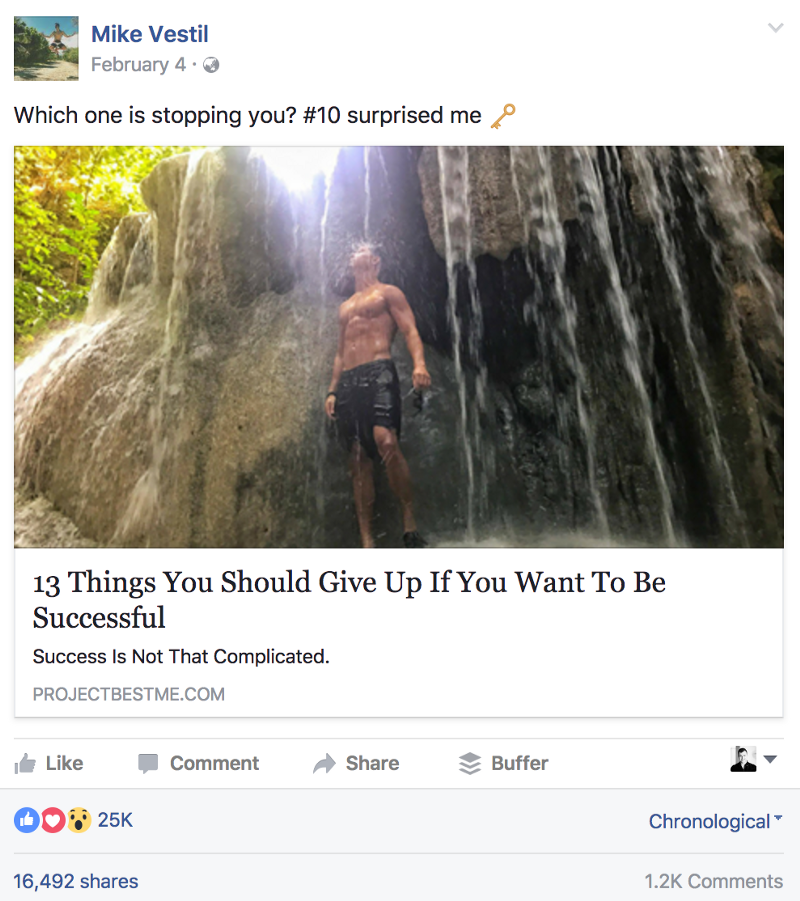