We said that 2017 would be the year for socializing in virtual reality, and then the biggest social network in the world dropped rocket fuel on the social VR fire with Facebook Spaces. The new app for its Oculus Rift lets four people gather in a virtual space, hang out, draw stuff in the air and look at 360° photos or videos as if you were inside them. The company announced Spaces at F8, its annual developers’ conference.

Ars Technica has a detailed run-down of what one can do in Spaces and which kinks still need to get worked out. The craziest feature: the mouth on your avatar (which looks like a gigantic Bitmoji ripoff) moves pretty accurately when you speak. How nuts is that?

Facebook’s late to developing experiences in virtual reality. In the last year, developers have made a lot of progress bringing virtual reality to the open internet, as we previously reported. In other words, you can build websites that are best viewed inside virtual reality goggles. But Facebook is a walled garden, an internet to itself. So we wondered whether or not Facebook entering the space would effectively make the new medium a Facebook project.

We spoke to early entrepreneurs in virtual reality, and they were surprisingly unconcerned.

“One thing that sticks out for us is the focus on 360 content,” Eric Romo, CEO at AltspaceVR, told the Observer in a phone call. “The way they put you in another place is they put you in a photo-sphere.”

This can be a bit hard to picture if you haven’t actually done virtual reality. A photosphere is a still photo that wraps all the way around. Imagine if someone took photos all around you, from wherever you are sitting and then stitched them all together into a globe. It would make a 360° view of exactly that perspective. You couldn’t get any closer or any further from any part of the image. If you moved your body left or right, the sphere would just move with you, so your perspective remains fixed.

A photo-sphere is all around you, but it’s still flat.

AltspaceVR makes social experiences that people can move around in and interact with. They do comedy shows and parties inside virtual reality.

“I think Spaces represents a really logical extension of your experience on Facebook,” Romo said. In fact, Facebook has built a new multi-directional camera in order for people to capture images that they can share for virtual reality viewing, as Fortune reported.

Romo wasn’t surprised that Spaces has limited its features for the initial release, but he said that “in order to create great social VR epxeriences, you need the web.” AltSpaceVR was built by welding the open-source version of the Chrome browser, Chromium, with Unity, the 3D game engine. “When you play a card game in AltSpace, that card game is literally a website,” he said.

It remains to be seen whether people will be able to bring open web resources into Facebook Spaces experience, but Rachel Franklin, Head of Social VR, hinted to more complex experiences to come in her announcement at F8 last week. For example, she said a pool cue might hypothetically turn into a pool table. Which doesn’t mean the company is working on a billiards simulation, but it hints that experiences which go beyond standing around and talking are coming.

What is clear is that Facebook has made a significant contribution to writing VR applications. It announced ReactVR at F8, a framework for coding up virtual reality projects. React has been Facebook’s popular framework used by lots of developers for writing professional grade apps that emphasizes a good user interface, according to Dr. Pete Markiewicz, a virtual reality and user experience consultant.

“ReactVR is WebVR wrapped up inside React. So, you never deal with WebVR directly,” he explained. “Instead you create VR components for your user interface in React.” This makes it straightforward for the large community of React developers to shift into VR.

Datavized is a startup working to present 3D data in any format, but especially in virtual reality online. CEO Hugh McGrory said, “Spaces is the first step in the direction of connecting a user in VR to users just on the 2D web,” because people with Facebook Messenger can call in to a VR hangout. They’ll appear flat, but they can see what’s going on, like the queen in Snow White, spying through her magic mirror.

The feature might have struck some viewers as a bit silly, but it creates a bridge between the folks that can afford a super computer and an Oculus and those who remain stuck with the flat internet.

“The next generation of phones are going to more and more enable users to capture things in 3D,” he said. Which should give people more to share inside Spaces.

While it remains to be seen whether WebVR creations by companies like Datavized will be viewable in future iterations of Facebook Spaces, McGrory viewed it as generally validating his company’s chosen medium.

“The reality is that VR up until now is a medium in search of an audience,” he said. “And Facebook has the largest audience in the history of the web.”

The conversation reminded us of our discussion with webcomics artists. Since the late 90s, some cartoonists had built a nice business online and Facebook helped a lot of them grow it. Then Facebook users quit clicking out of the site to the rest of the web.

If nothing else, Facebook’s involvement should play a big role in defining what VR is for. “This is really a new communication platform,” Mark Zuckerberg said when he announced his company’s acquisition of Oculus VR in 2014.

Facebook wasn’t the first to VR, but Zuckerberg also wasn’t even close to the first to social networking. Still, he proved far more adept at scaling it than his predecessors at places like Friendster and MySpace. Virtual Reality could be next, but it could also be the next Facebook Phone. We’ll see. 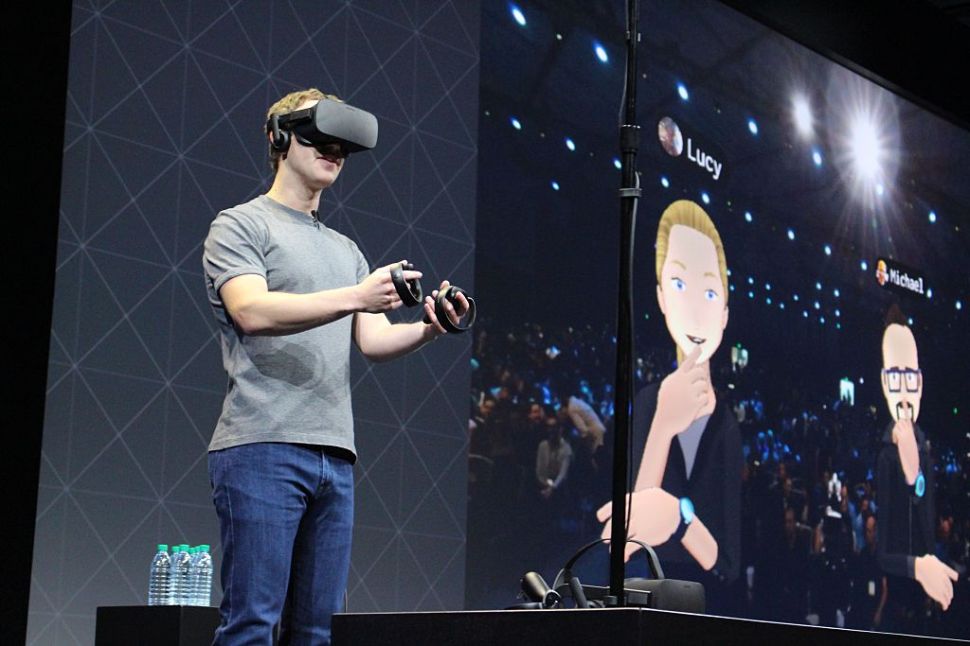