Then there is the question that ultimately confronts anyone for whom this movie is an introduction to Hollywood’s most absurd and unlikely franchise: What the hell is wrong with you, you idiot? For those of us who foolishly slotted the Fast and Furious and its brethren to the NASCAR/ Saw movies file as the rare pop culture phenomenon you allowed yourself to avoid, this movie is the one where you wave the white flag and finally, happily, give in to the turbo-charged ridiculousness spearheaded by that soulful lunk Vin Diesel and his band of super buff gearheads.

The narrative thrust of this film—and the movie is pretty much all velocity and thrust—comes from the betrayal by Diesel’s Dom Toretto of his beloved crew at the behest of Charlize Theron’s Cipher, who seems to possess the ultimate leverage over him on her cell phone. “You are going to work for me, betray your code, and shatter your family,” she says to Toretto, which is pretty much the same pitch Travis Kalanick uses to lure talent from Google over to Uber.

Theron is terrific in the part, confident enough to let her cheekbones and crazy yarn hair do most of the acting. Of all the unexplainable and logic-defying feats portrayed in the film, Theron’s hair—and how she maintains it onboard the satellite and prison equipped airplane in which she spends most of the movie—may take top prize. Indeed, when they flash a dossier for her mysterious character on one of the various informational screens that bleep and bloop throughout the movie, it is revealed that her hair color is, “Unknown.” Yes, and like her steely intentions, perhaps unknowable.

Most of the rest of the assembled are returnees, the glittering jewel of which is Jason Statham’s Deckard Shaw, who gets to antagonize Dwayne Johnson while simultaneously saving the Earth as a conscripted member of the crew. The British actor has more charisma than he knows what to do with. His balletic airborne martial arts dance while holding a baby is not only one of cinema’s cleverest John Woo tributes, but a joyfully absurd way to kick off the summer movie season. We all are that baby, cooing as we are flung about with seeming abandon but also with the utmost care.

If anyone here is having more fun than either Theron or Statham, it’s their Italian Job director, F. Gary Gray. Taking the reigns of the franchise for the first time after an extended search, he seems to treat the gig like a kid who gets to stay overnight in FAO Schwarz. The 22-year Hollywood vet shows a burly elegance his previous work has only hinted at. In his best moments—like when he mounts the camera on the front of a zombie car being forced by malevolent forces thousands of miles away to hurtle off of a Manhattan parking garage—he hits upon cinema’s grandest purpose: the act of shared dreaming.

One doesn’t need to have a Ph.D. in Fast Furiousness to understand that these movies, like dreams, have their own physics. Cars can drive just as fast in reverse as forward and you can jump out of a car moving at unfathomable speed and land on your feet in time to look up and watch it explode, especially if you are Vin Diesel, who does it twice in the movie. Another rule is that things are never allowed to slow down, which hogties Gray a bit: from Friday to Straight Outta Compton, the director’s specialty is allowing his characters to chill. But the only chill in Fate is coming off an ice-bound nuclear submarine facing off with Toretto’s souped-up Charger.

Similarly, the film eschews the Joss Whedon-ish one-liner punch-ups that we have come to expect from billion-dollar team-up movies. When a bad guy has a grisly run-in with a submarine propeller, instead of a Rainier Wolfcastle bon mot (“Slice to meet you”), Dwayne Johnson delivers a perfunctory, “Well…Nasty.” That approach feels too grounded for a film that otherwise relies so much on outlandish, even impossible, spectacle.

Still, in the end, you do feel bludgeoned by The Fate of the Furious, but not by its constant bloodless violence or flood of vehicles. Like a Republican convention, the movie couches its military-industrial complex agenda in family values chatter. I lost count but the word “family” is mentioned upwards of 50 times, many more times than it is in, say, Lilo & Stitch. Yes, it is way too much, like everything else in this aggressively over-the-top film, but at the same time, it just feels nice to be part of the group. 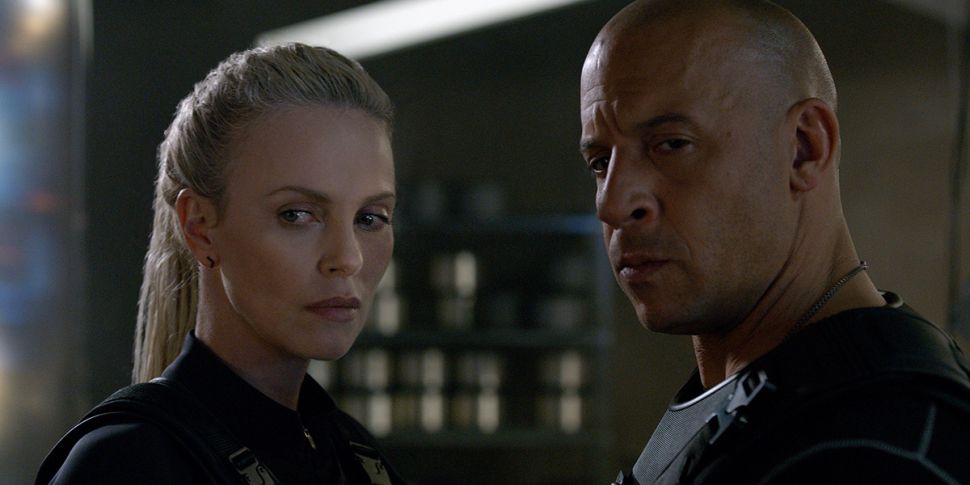