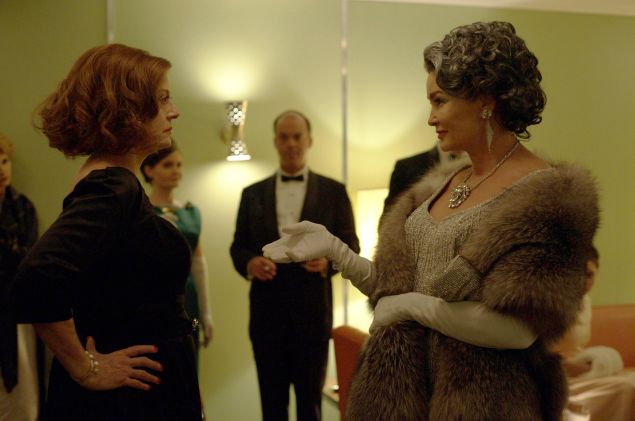 Episode five of Feud kicks off with a montage reminding us that Bette Davis has been nominated for an Oscar for her role in What Ever Happened to Baby Jane? and Joan Crawford has not. Man, if you thought they were feuding before…

Then here’s Catherine Zeta-Jones again reflecting on the 1963 Oscars, which on the show haven’t happened yet. This scene also gives Zeta-Jones to give another definition of what a “feud” is. You will recall that in the very first episode she clarified that feuds are never about hate, but about pain. I would watch a show that was just Catherine Zeta-Jones just free-associating about the word “feud” for an hour every week, but alas, this ain’t that.

Crawford goes to Price WaterHouse to seemingly contest her lack of Oscar nomination. The man behind the desk assures her Price WaterHouse never screws up. Hahaha. Actually she just wants to present the award for Best Director at the ceremony. Davis vents to Olivia de Havilland (Zeta-Jones). Crawford vents to Hedda Hopper. Everyone is extremely stressed out about what’s going to go down at the Oscars. De Havilland tells Davis not to give the press what they want — a catfight. Hopper wants to literally lobby Oscar voters to vote against Davis while keeping Crawford out of it, which is wild. Hopper also hates Davis apparently, which, if Feud mentioned this before, I don’t remember it. Crawford and Hopper go about good cop/bad cop-ing Academy voters, respectively, to tilt the scales against David.

Crawford calls up Geraldine Page (played by Sarah Paulson here) who has been nominated for Best Actress. Crawford thinks it’s great that she was nominated (not really) and just wants to congratulate her (nope.) Really what Crawford is doing is getting into Page’s head to try and convince her to not go to the ceremony and just let Crawford accept the award for her. The whole conversation is simultaneously hilarious and heartbreaking. Crawford then proceeds to do basically the same thing to another Best Actress nominee, Anne Bancroft. Like a lot of things on Feud, it’s amazing and wonderful that all of this really happened.

Davis gets ready for the big night, very confident that she will win Best Actress. Uh oh. A friend tries to warn Crawford against stealing the night from Davis if Davis doesn’t win. Crawford agrees this is a terrible idea (I’m just kidding.) Davis talks to her Oscars and literally tells them she’s bringing them home a baby brother tonight. Uh oh. De Havilland gives her friend Bette Davis a pep talk and assures her she’ll win. This whole episode is just ‘uh oh’ after ‘uh oh.’

Joan Crawford has turned the green room into her own private party somehow, despite the protests of Academy officials. Bette Davis storms in and they glare at each other for about seven hours. Crawford takes the stage to present the award for Best Director. Honest to goodness, ever since what went down at the latest Oscars, watching people present awards makes me twice as nervous. There’s a several-minute long shot of Crawford leading the Best Director winner backstage that includes her passing a Pepsi machine, Mamacita, and a guy pissing in a urinal. It’s all surreal and great.

The Best Actress nominees are read. Davis tenses up waiting for her name to be called. Crawford tenses up waiting for either of the names she’s accepting the award on behalf of to be called. The winner is Anne Bancroft. Bette Davis looks like she’s going to projectile vomit over everything in sight. Joan Crawford looks like the happiest person who’s ever lived as she takes the stage to accept Bancroft’s award on her behalf. Crawford gives a short speech and walks off stage right past Davis, who is not breathing. Neither am I. It is intense.

Back home, Davis and de Havilland are seething and drinking heavily. Crawford returns home alone and puts the Oscar statue on her nightstand but she still looks very lonely. Just goes to show you. The feud rages on. 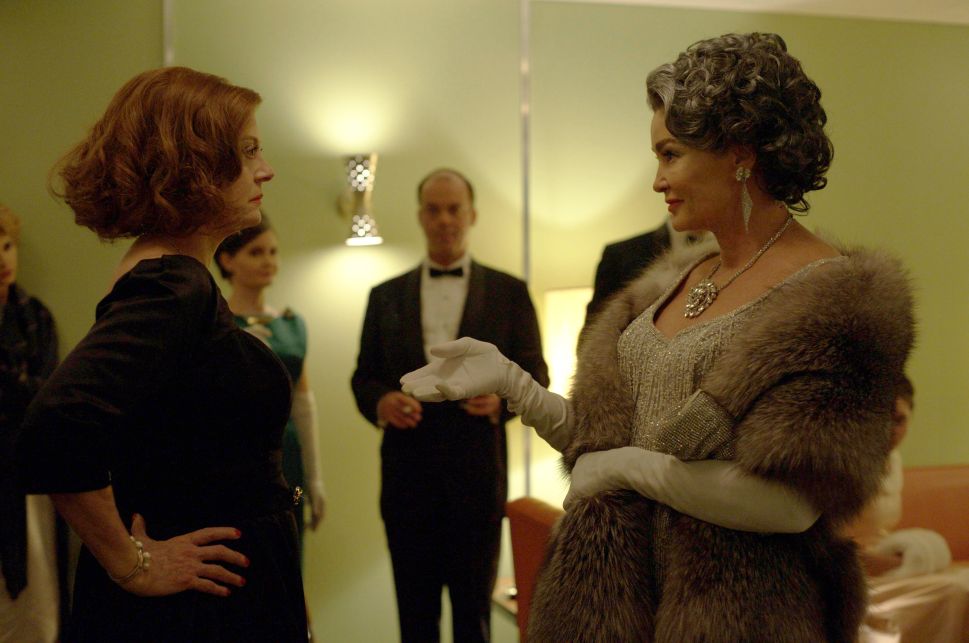