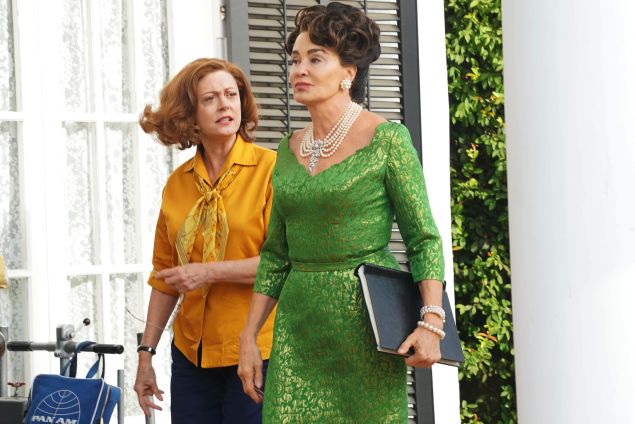 Episode 7 opens with Joan Crawford having a grand old time filming their new What Ever Happened to Baby Jane? knock-off. Everyone’s in good spirits and being nice to each other and I have no reason to believe this won’t last for the duration of the episode.

Except no, not really, because Crawford still isn’t thrilled that Bob and Bette Davis are sleeping together. I’m not either. C’mon Bob and Bette. Get a grip.

To make matters worse, Bette begins giving Bob notes on Joan’s performance. Joan isn’t thrilled about this at all. Joan asks Bob where his balls are. By my count, this is about the sixth time Bob’s balls have come up on this show. Joan really lets Bob have it in his trailer, and begins driving a wedge between Bette and Bob.

Bette and Bob have a genuinely sweet scene where they’re drunkenly fooling around until Bette gets side-tracked talking about the industry’s misogyny and has a semi-breakdown. It might be Susan Sarandon’s best moment in the series so far. Joan proceeds to get hammered in her trailer and confronts Bette in the middle of the night. Sarandon and Lange both knock it out of the park ruminating on Bette’s talent and Joan’s beauty.

B.D. (who is 16) breaks the news to her mom Bette than she wants to marry her 29-year-old boyfriend Jeremy. Bette’s less than thrilled about this and declines her approval. Fair enough. Joan gets pissed so she feigns an illness and spends 12 days in the hospital just to avoid showing up to film her scenes. So they find someone who looks like her from behind to shoot it. Bob goes to the hospital and begs her to return to work. Joan uses her leverage to give her own notes about the script. Bob shuts her down by reminding her she signed a contract. Everybody’s feuding!

Joan takes things to the next level by showing up to the set in a wheelchair and soliciting applause from the crew. It’s great. Bette and Joan get into it, so Joan pretends she can’t breathe and goes back to the hospital. This is also great. Bette tells her daughter she can get married after all.

So now the studio’s pissed because they’re losing a ton of money because Joan refuses to return to work. They get a bunch of lawyers together and have a big sit-down. Bette takes the opportunity to sass Joan to kingdom come. Joan agrees to an independent medical exam to prove that she really does have a rare form of pneumonia.

Bette imparts some wisdom upon B.D. about marriage by delivering the excellent line “Your first wedding is the one you remember the most.” So what was looking to be a heartfelt, sweet conversation devolves almost immediately into a cruel fight, which is kinda Feud in a nutshell, huh.

Joan tries to seduce the studio’s doctor giving her a medical exam. He repays her by telling the studio she’s fit to go back to work.

All of a sudden, here’s Kathy Bates again. Then she’s gone. Joan gets summoned to appear in court — it seems the studio is ready to sue her for not showing up for work. Joan gets a big kick out of this until she finds out — via a radio broadcast, no less — that the studio has decided to just replace her with Bette’s good friend Olivia de Havilland. Joan reacts to this news by smashing a bunch of shit and sobbing and throwing a vase at Mamacita. So, she’s not happy. You know who else is not happy? Mamacita. Mamacita gets the hell out of there. Ironically now Joan really is ill. The episode ends with Bob, Bette, and Olivia all promoting Coca Cola. Wowza.

One more episode to go! 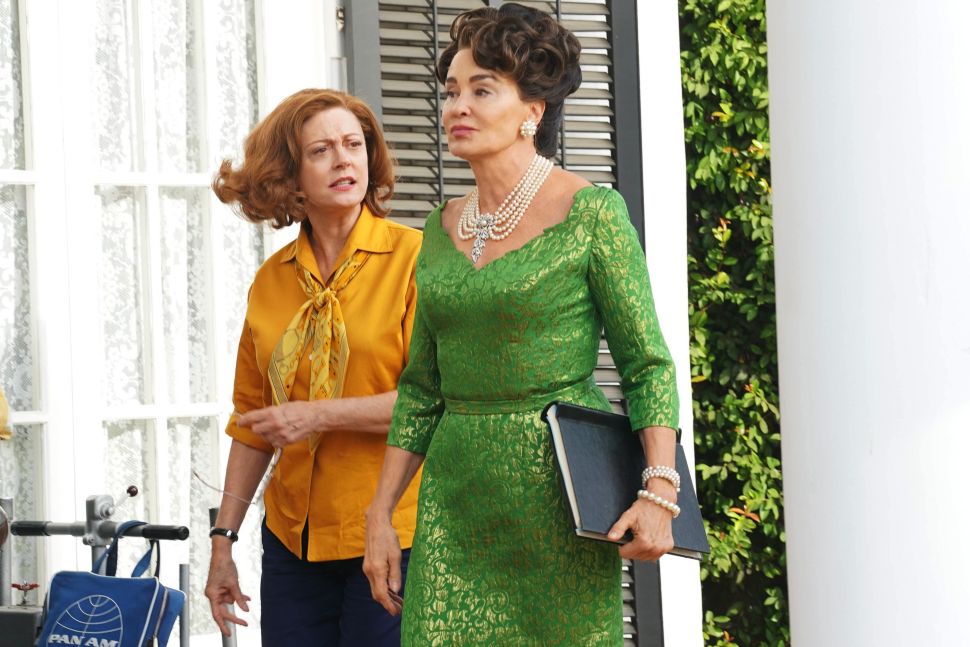