Around 5,000 serving police officers and 50,000 members of the public lined the route from the Palace of Westminster to Southwark Cathedral for the funeral of PC Keith Palmer. The officer was killed in the line of duty during last month’s terrorist attack on Westminster.

Yesterday PC Palmer’s body was brought to The Palace of Westminster after HM The Queen agreed to allow him to lay in state at the Chapel, St Mary’s Undercroft. This is considered a very high honor generally reserved for VIPs such as Margaret Thatcher.

Palmer was also afforded the very rare honor of a Full Force Funeral, the police equivalent of a state funeral. Officers from across the UK and the world attended, including a group from the NYPD.

At 1:30pm (GMT) the coffin, draped in a police flag, was loaded into the hearse in Star Chamber Court and driven through New Palace Yard. It briefly paused close to the spot where PC Palmer was killed. The cortage consisted of his wife Michelle and their 5-year-old daughter, with flower arrangements spelling “No1 Daddy,” “Brother,” “Uncle” and “Keith” were placed on top. A further 50 members of the Palmer family followed behind.

The procession was guided through the street by motorcycle outriders who are more used to escorting royalty. Three of the riders were in their full dress uniform as a mark of respect. When the coffin got to the district of Southwark in south London, nine black horses escorted it to the Cathedral.

The Palmer family requested a private funeral; his wife and daughter’s stretch-Jaguar had tinted windows and peeled off from the main procession so they could enter the cathedral away from cameras.

His coffin was carried by officers from the three divisions of the Metropolitan Police he had served: Bromley Police, The Territorial Support Group (TSG) and the Parliamentary Division. All officers attending the funeral were given free rail travel by both South West Train and Southern Rail.

At exactly 2:00 p.m. PC Palmer’s body arrived at Southwark Cathedral. Officers observed a two-minute silence, joined by every police station in Britain. No media were allowed into the cathedral itself, but loudspeakers broadcast the audio to the thousands of people gathered in the streets.

The Dean of Southwark, The Very Reverend Andrew Nunn, led the funeral service, using the Easter Week timing to deliver a message of duty and sacrifice. The funeral was attended by Britain’s most senior police officer, Met Commission Cressida Dick on her first day in the job.

Earlier in the day Palmer’s name was added to the National Police Memorial, joining around 4,000 other officers who have died in the line of duty. An honor guard at the dedication was organized by West Midland’s Police, in order to allow PC Palmer’s colleagues from the Metropolitan Police get to the cathedral for the funeral itself. Officers from Greater Manchester Police assisted in guarding the Palace of Westminster so Parliamentary Guards could also attend.

It emerged today that Palmer had been nominated for a crime-fighting award given to the officer who arrests the most people. He was cremated at a private family occasion at an unspecified location in South London.

Members of the public have raised $1m for his family. Security has been improved in Parliament after it was revealed that Palmer was unarmed when Khalid Masood attacked him. 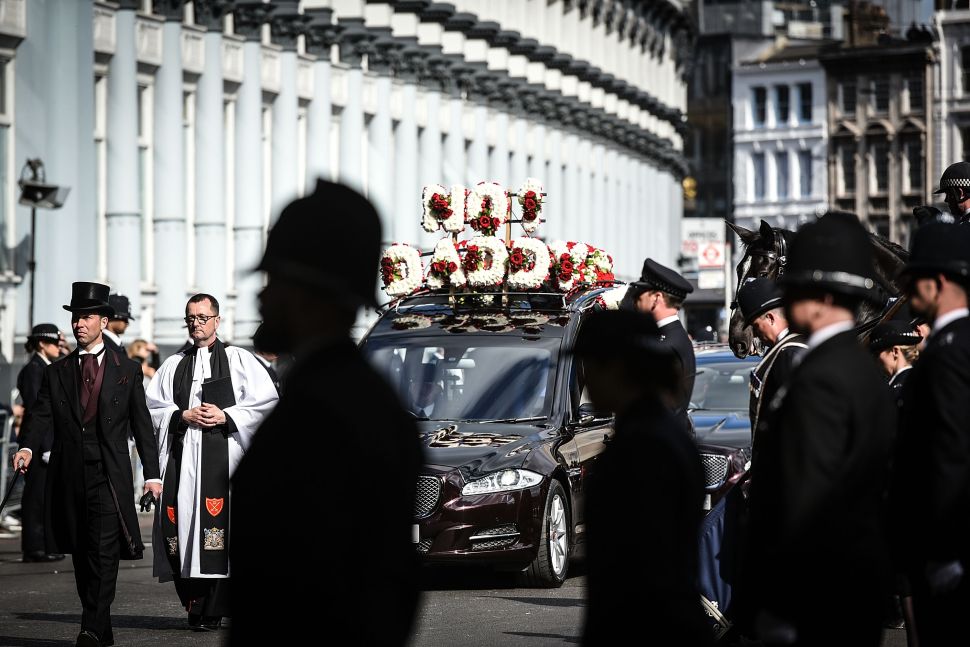