When one thinks of the National Geographic Channel, killer parties is not the first thing that comes to mind. Nor does a slate of compelling TV dramas. This network is famous for Tiger Wars, and The Jungle King. Not Little Big Lies or Bates Motel. But that’s all about to change.

A live violinist played at the front of the old school movie theatre while everyone took their seats. And after Howard and Grazer gave an opening speech, the show finally began.

Based on Walter Isaacson’s critically acclaimed biography, Genius is entirely nonfiction, unafraid to show both the good and not so pleasant sides of one of the world’s most famous scientists. There’s much more to Einstein than the crazy-haired professor that once took a photo with his tongue sticking out.

Back in February, while visiting the Genius set in Prague, I discussed with Rush what it’s like to portray such a historical icon. Rush said, “Sometimes, people can be very well known in the public imagination and there are expectations of how you’ll meet what they think you know about him. It’s been interesting talking to other members of the press, or even with my wife while practicing my lines, she’s like, ‘I never knew that!’ There’s very little people actually know about [Einstein].

“He’s quite human,” Rush said. “He had estrangement from his children [which were] quite mortifying, difficult arrangements. Complicated marriages. A sense of isolation, because I think he knew he had a gift that required solitude. So you look at those elements, and I did a comparable thing with Peter Sellers [The Life and Death of Peter Sellers] and Marquis de Sade [Quills] who was pretty well known, where you break the stereotypes, or what’s become social myth. [With Einstein], there’s just as much Groucho Marx in him as there is scientist. Some Harpo, too.”

While in full hair and makeup, Rush resembles Einstein even more in person than on screen. I felt my heart skip a beat upon first seeing him on set. Everything was so particular, from the way he buttoned his sweater, to the uneven gait of his walk. I’m not sure if I was starstruck from meeting Rush or because I had this ridiculous momentary feeling that I was standing before the man who came up with the Theory of Relativity. He’s that good.

Rush smiled, winked, made two jazz hands and did a little dance. I waved and smiled back. This kind of energy reverberated throughout the entire set. Everyone from the key grip to the actors, to the director of photography seemed infused with Einstein’s passion to create without boundaries, to seek out a deeper truth in whatever their assigned craft. Genius is not a term reserved only for scientists. So, whether it’s life imitating art, or art imitating life, this series is a conglomerate of everyone’s contributed genius.

The amount of hard work that went into producing such a successful show was not lost on Nat Geo. A series like Genius is worthy of a major celebration, and the minute the closing credits rolled, the fete began. Walking outside of the theatre, guests were greeted with men dressed in Victorian style suits, all of them riding bicycles while handing out party favors.

Upon entering the skylight domed venue, constructed just for this special occasion, I was overwhelmed with the amount of activity happening. Taking pause, I located the bar first. There were multiple set up. Phew. There were also two separate photo booths and at least six food stations offering up everything from Jon & Vinny’s pizza to freshly made In-N-Out burgers. Servers wearing black shirts with Nat Geo themed yellow ties and suspenders, weaved around serving E=MC2 cocktails and other Genius inspired drinks.

Like bookends on each side of the room, a burlesque dancer and a top-hat-wearing gentleman were each strapped to sky high poles. Throughout the night, these bendy pillars swayed back and forth, leaning deeply towards different ends of the room each time. These circus-like performers made guests jump in surprise by suddenly dipping right in front of their faces. It all made for quite a mesmerizing spectacle.

On the main stage, the band PonyTrap performed in front of a large dance floor, and with it being so early in the evening, it was an empty one. Whispering to my friend, “I give this 40 minutes before the prim and proper goes out the window, and this party gets rowdy.” But the joke was on me. By the end of the night, it was me drinking straight from the bottle with no shame, letting loose with everyone on the dance floor.

Unlike most Hollywood parties, especially one on a Monday night, guests stayed until music stopped. And even then, it wasn’t until the room was being physically deconstructed that everyone finally went home.

Before heading to my Lyft, I grabbed one more Genius cupcake on the way out. Because, why not? As Einstein once said, “A happy man is too satisfied with the present to dwell too much on the future.”

Tuesday (April 25), was the Problematic with Moshe Kasher viewing party at Hyde Sunset. Now, if you’re shaking your head, thinking all people do in Hollywood is party, well…that’s sometimes true. But not for everyone! For the most part, attending these events are contractual obligations, and if party turns out to be fun, it’s truly an unexpected bonus.

My apprehension for this Comedy Central party was twofold.  While there is a kind of person who loves going to nightclubs, I am not one of them. And while hanging out in a room full of comedians may sound awesome, it can make you feel like a test dummy. Each comic is always trying to top one another with their jokes. Instead of listening, actually being engaged in real conversation, they’re trying out new material, and then staring at your face to see if you laugh.

However, all my concerns were unnecessary. Kasher is a highly intelligent comedian and his new weekly series gets better each week. Let’s just pretend that premiere episode was a dry run. Or if you can, block it out entirely.

For this viewing party, fellow comedians T.J. Miller and Doug Benson were in attendance, including Kasher’s wife, Natasha Leggero. Even though she was supposed to already be in New York City, as her series, Another Period, was having an event at the Tribeca Film Festival the next day, she postponed her flight to stay and support her hubby. I ship them so much.

The darkly lit and intimate setting at Hyde was actually the perfect setting to hang out and watch Problematic. Making things even better, mini cheeseburger sliders, cajun-fried shrimp, along with slew of other delectable looking goodies were making their rounds. Believe me when I say that I tasted everything. What’s that little crostini thing with the peaches and cheese? You have to find out, right? I ended up talking to the waiters more than the other guests. I was particularly curious to find out why the mini pulled pork sandwiches were so damn tasty. Was it the Hawaiian roll bun? It definitely was.

After watching the latest episode of Problematic, in which Kasher tackled social media and how it’s negatively affecting the biochemistry of our brains, I approached the Comedy Central star to see how he’s enjoying the live tapings and the audience feedback. While interviewing Kasher before the show first premiered he said, “If @midnight is the internet. I want this show to be the dark web. It will be an in-studio conversation about the muck at the bottom of culture. I think people are realizing that they’ve been pushed towards all these distractions, but now that fucking Sauron is president, we need to wake from this slumber.”

But it should be noted that Problematic is not a liberal vehicle created only to bash Trump. In fact, the show was picked up to series before the 45th President was elected. “I want this to be conversations driven by the darkness that is looming beyond Trump,” Kasher says. “This is going to be Phil Donahue for the Internet generation.”

While discussing what viewers can look forward to in upcoming episodes, Kasher says, “conversations about guns, how to topple a leader.. “ before a waiter, holding plate of chocolate truffles, interrupted our conversation.

“We got the chef to make them nut-free especially for you,” she said.

Kasher looked confused, and I can’t blame him. While the gesture was extremely nice, the waitress was presenting a specially made plate to me, at his party. And I looked like self-entitled, thirsty princess. To be clear, I did not ask if they could make me a nut-free dessert, but I did pass on the truffles when I saw they had nuts. I have no idea what Kasher was thinking, but I felt my face turn red.

Thankfully, someone else grabbed Kasher’s attention, and I quickly moonwalked away.

Did I immediately then go and thank the waitress for getting those melt-in-your-mouth truffles made as a surprise? Of course. And am I excited to see next week’s episode of Kasher’s show? Hell yeah. Similar to that feeling of being publicly singled out for being that girl at a party who is more excited about the food than the people, Problematic is a sometimes cringeworthy watch, but it’s mostly wonderfully hilarious. 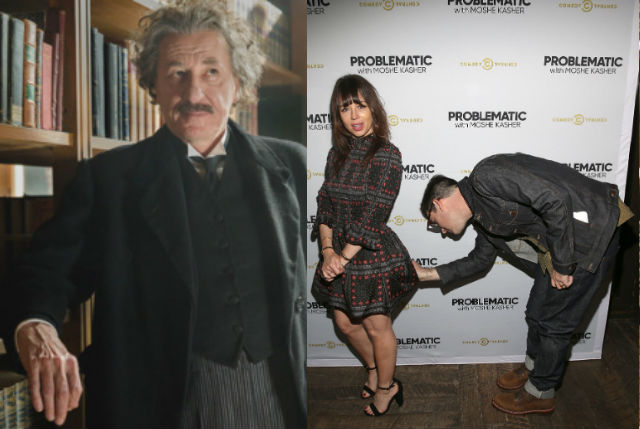